International Convention of Students in Arsk 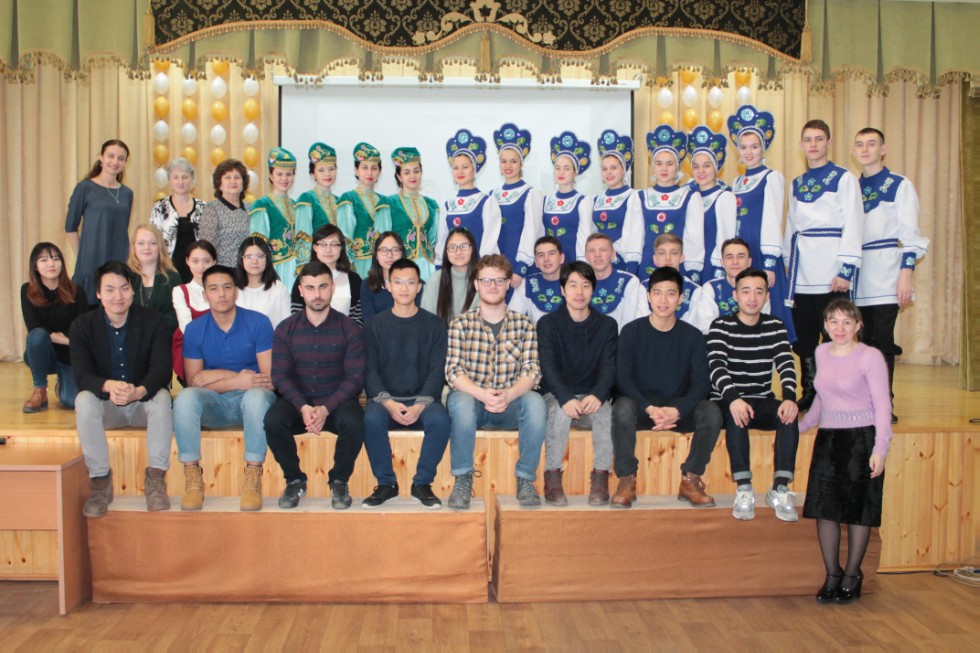 On March, 24 foreign students and instructors (Gafiyatova E.V., Mingazova N.G.) of Philology and Intercultural Communication Institute n.a. Leo Tolstoy visited «Arsk Pedagogical College n.a. Gabdulla Tukai» as a part of the cooperation program between Arsk College and Kazan Federal University. The college assembly hall aggregated the students, pupils, Republican teachers of English, and the college managers. The event was inaugurated by the hosts who welcomed the guests with a special concert program, introducing them to the Tatar folk arts. The students also greeted the hosts and the audience in their native languages while the pupils were eager to guess where the students had come from and what languages they spoke. It turned out that the greetings were in English, Chinese, Korean, Thai, Turkmen, Turkish, and Japanese. The clip showing the student life in Kazan Federal University was next on the list. Following it, Head of the Department of Contrastive Linguistics Mingazova N.G. told about the activities conducted by the Department and its main educational programs connected with foreign languages and studying Russian and Tatar. Associate professor Gafiyatova E.V. introduced the audience to the activities of Kazan Regelta, the association of teachers of foreign languages.

The official part of the event was followed by master classes organized by the foreign students for the pupils. Presented at the master classes were the students’ native countries, their capitals, cuisine; the pupils were shown how to write hieroglyphs. Icing on the cake were quizzes which were given to the participants who were showing huge interest in the foreign languages and cultures.

Associate professors Mingazova N.G. and Gafiyatova E.V. read lectures for the Republican teachers on «Ethnocultural component in teaching a foreign language: cross-cultural parallels in the languages of different structure» and «Design and use of electronic educational resources in English at schools». This was done as a part of the advanced training program «Interactive technologies in teaching foreign languages as the basis of the activity approach in terms of Federal Educational Standard».

We express gratitude to the principal of «Arsk Pedagogical College» Garipova G.F., the administration and English language teachers for providing transportation, feeding, and excursion to the museum of the ABC-book. We are looking forward to our fruitful cooperation.