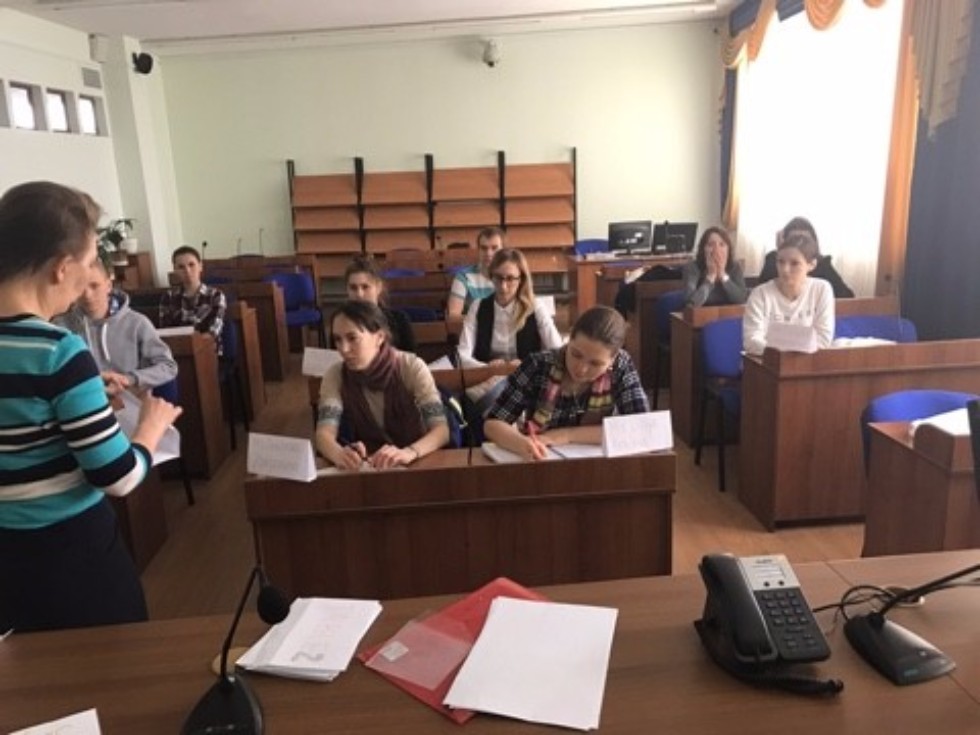 English Language Fellow, Ana Maria Ferraro, currently working in the Germanic and Philology Studies Department has created an EFL project called the “English Here” Project.  She developed it to complement the Tourism Committee of Kazan’s new “I Help Kazan” Project and supplies the English language component to their city-scale hospitality project. The idea behind both projects is to have Kazan be known not only as the “Sports Capital of Russia” but also the “Hospitality Capital”. This city is one of the largest cities in Russia and is increasingly attracting more people. The “English Here” Project aims to make the it a bit more hospitable specifically to international visitors when it hosts in 2018 the FIFA World Cup in 2018 by increasing the amount of English spoken and found in touristic areas throughout Kazan.

At present Ms. Ferraro has three KFU instructors teaching three sections of English for Specific Purposes to approximately 50 restaurant workers from 23 restaurants from Kazan. The courses are free to its participants, but will be rather intensive. The goal is for all of these restaurant workers who currently speak no English to be able to successfully and hospitably interact with English-speaking visitors. The “English Here” Project is a small project with hopes of becoming greater. It has only been able to function as a result of its support from KFU. Now, thanks to the gracious efforts of Radif Rifkatovich Zamaletdinova, Marina Ivanovna Solnyshkina and Diana Nailevna Davletbaeva the “English Here” Project has been provided a beautiful classroom to hold these courses until the end of May.

At the conclusion of these courses, the Project translators will work together to translate all of the participating restaurants’ menus. The “English Here” Project will continue through July, hopefully working with more volunteers— like it did over the summer, working with more restaurant workers, and working with hotel staff and taxi drivers in order to increase the amount of English spoken in Kazan. Ms. Ferraro feels hopeful about how the Project is coming along and has greatly enjoyed interacting with and teaching people from the community, as well as collaborating with the Tourism Committee and her KFU staff. She feels quite grateful for the interest the community has taken in her Project and hopes that once she leave the city of Kazan, that the Project continues to grow without her.