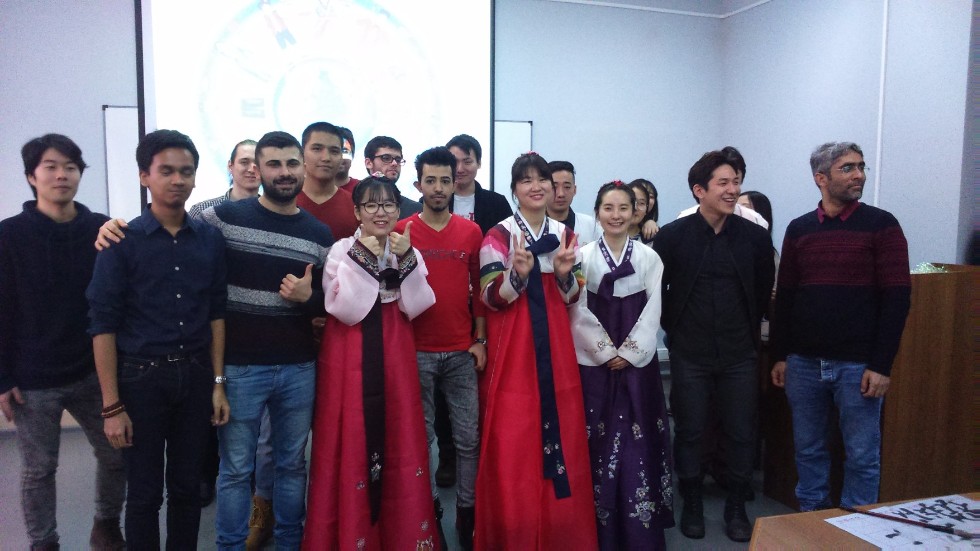 By decision of UNESCO, since 2000, “Mother Language Day” has been celebrated every year on February, 21 to protect the linguistic and cultural diversity of the world.

This year this holiday turned into a whole series in the higher school of the Russian language and intercultural communication of KFU. Yesterday we already reported about the Chinese day having been held at our institute. It aroused such an interest among foreign students that many of them came to the "second series" on their free day to hear Korean speech and get to know Korean culture more closely.

During an interactive journey "Meet South Korea!" there was a real full house - the apple had nowhere to fall in the center of the Russian language and culture on February 21, 2017. Students from China, Finland, America, Germany, England, Japan, Turkmenistan, Turkey, Indonesia, Iraq, Iran, Slovenia, Spain came to touch upon Korean culture.

First of all, students from South Korea told the guests about Seoul, as well as about the national cuisine, accompanying their story with colorful presentations. And when the Korean beauties Li Song Mie, Pak Arym and Kim Sine went out in bright national costumes and sang in Korean, many European students could not help singing and dancing on the spot. The demonstrative performance "The Taekwondo Martial Arts Techniques" was not disregarded either.

But the greatest interest among those present ones was caused by the demonstration of Korean national games. The guests took part in them with great enthusiasm, and those who had the best results received memorable gifts from Korea.

At the end of the meeting, Korean students thanked all those present ones for their active participation and expressed the hope for this meeting being far from the last.

We are sure that the third series of the holiday "Mother Language Day" will be the most exciting and interesting! See you on holiday in the Saby district!