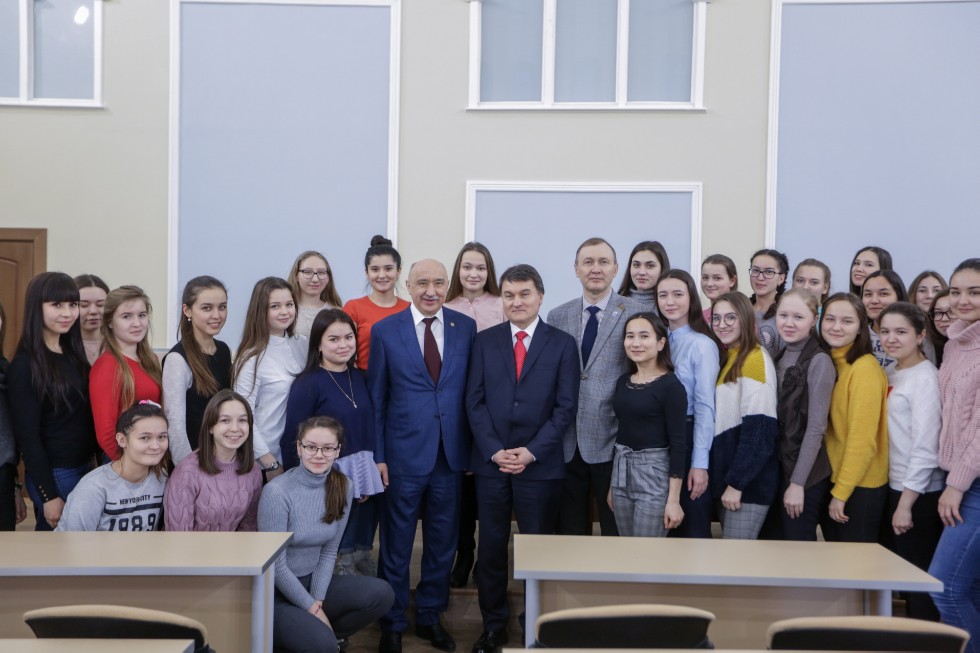 Within the framework of the international forum "Education of Russia", RAO President Yury Zinchenko was shown Tatarstan technology transfer platforms in the field of education, one of which Is the Institute of psychology and education.

The international forum "Education of Russia" is held only for the second time, but has already become a successful and popular educational platform – the event is organized with the involvement of investors interested in the results in the industry.

In his welcoming speech to the audience at the opening of the forum, more than 4,000 people, RAO President Yu. Zinchenko noted the changes that have occurred in the perception of society in the sphere of education – both on the part of civil servants and on the part of business.

— It is no coincidence that all major international venues - such as forums in Sochi or Davos - have two or three sections devoted entirely to education. This is a clear sign that it is time to look for internal reserves that can solve problems. And education is just such a resource.

After the plenary part of the forum, rector of KFU Ilshat Gafurov told the guest about the development strategy of the University, and, in particular, pedagogical education, which is one of the four priority areas of the Federal University and demonstrated the platforms for technology transfer in Tatarstan in the field of education. One of the most successful examples of which is the Institute of psychology and education.

Director of IPO Aidar Kalimullin Minimumsave shared experience of development of the education system and teacher training at the University. He told that, in particular, represents an educational and career trajectory of the teacher.

According to the representatives of the Institute, in recent years there has been a trend of increasing interest in pedagogical education – this is evidenced by the competitive statistics of the Department. This is due to the fact that the equipment of the center of pedagogical magistracy of IPO KFU today allows to compete on equal terms with the best universities in the world.

Keywords: President of the Russian Academy of Education visited the Institute of Psychology and Education

4
Education Science Leadership Competitions Student Life International Culture Sports Cooperation News of the reception
Leave a comment
Other news and announcements
Career prospects feeble for fans of Russian rap, shows research of social networks
Assessment of language acquisition by bilingual Russian-Italian children
Research shows how digitization influences performance of preschoolers
Student of the Year at Kazan Federal University 2020
Submit your abstract to take part in IFTE 2021
Psychological factors contributing to language learning
Psychologist Ildar Abitov on superstitions in different circumstances
Cubicles for online teaching now available to educators
Mari and Karelian respondents give insight into necessary improvements of local language and culture education
Freshman Day Gala held amid attendance restrictions
The KFU Institute of Psychology and Education launched a master's course in counseling psychology
Researchers from Institute of Psychology and Education KFU published an article in Q2 journal
Online-project supported by the Russian President grant initiative
Mustafá Unus, a partner of Institute of Psychology and Education of KFU, became the president of WERA
KFU was ranked high among educational institutions that use digital resources
The article on the results of VI International Forum on Teacher Education was published in bulletin of International association ISATT
The extracurricular activities programme for the polylingual school Adymnar was developed by KFU educators from the Institute of Psychology and Education
A chapter written by the professor of Institute of Psychology and Education KFU will be published in the American journal
Women more prone to depression in countries with low gender equality rankings
TEPE Conference 2020 (University of Helsinki, Finland)
KFU journal 'Education and Self-Development' was included in the fourth quartile of Scopus database
Āõīä ā ėč÷ķūé źąįčķåņ
Ēąįūėč ļąšīėü? Šåćčńņšąöč’

Ōīņīćšąōč’ čē ģąņåščąėą: President of the Russian Academy of Education visited the Institute of Psychology and Education