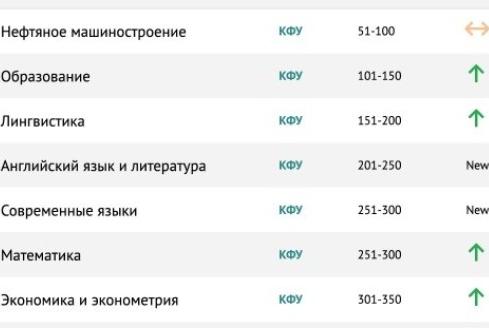 The British agency Quacquarelli Symonds (QS) has published the next issue of the annual ranking of universities. In the direction of “Education” Kazan University took the 101-150th place in the world (previously – 201-250), retaining the 3rd place in Russia.

IPO KFU managed to significantly improve its results on all of the six indicators: research activity, teaching, employers’ opinion and career potential, the number of foreign students and teachers. The QS ranking pays great attention to the reputation of universities in the academic environment.

Director of the Institute of Psychology and Education of the Kazan Federal University Aydar Kalimullin specified that the dynamics was largely provided by the growth of the research activity indicator.

– 2020 is a very successful year for Kazan Federal University in the subject area “Education”. The university’s specialization in the preparation of modern and qualified teachers allowed it to enter the top 100 universities in the world in the Education subject area of ​​the Times Higher Education ranking and take 90th place. Kazan University became the only Russian university in the first hundred of the subject ranking in this direction. Today it is the best absolute indicator among higher educational institutions in Russia, Eastern Europe and the CIS.

According to the rating just published by the agency Quacquarelli Symonds, KFU has increased its positions in the field of education by 100 points and is now among the top 150 universities in the world.

According to the director of the IPO KFU, the growth of the university in the ratings is due to the huge and qualified work that has been carried out at the university since 2011.

Scientists of Kazan Federal University see the main task of advancement in international rankings, first of all, as a demonstration of the real state of Russian education in the eyes of the world scientific and pedagogical community.

The QS World University Rankings, compiled by the global research consulting center QS Quacquarelli Symonds, assesses more than 1,453 universities from around the world in 51 subjects. Items are distributed across five areas.

Keywords: KFU has grown by 100 points in the QS subject ranking “Education”