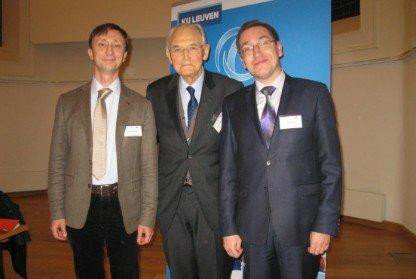 From 19.02.2014 to 23.02.2014 professors of the Department of International and European Law: Head of the Department Adel Abdullin and Associate Professor Rustem Davletgildeev were in the Catholic University of Leuven (Belgium) and participated in the international scientific-practical conference "Fostering labor rights in the global economy. Interdisciplinary perspectives effectiveness of transnational public and private initiatives", organized by Leuven Center for Global Governance Studies.

Head of the Centre is Professor of International Law Jan Wouters, he spoke at a conference with a greeting and was the moderator of one of the sections.

In the area of international labor law, presentations were made by leading world experts in the field: Professor Frank Hendrix - Director of the Institute of Labor Law of the Leuven University and editor of the European Labour Law Journal, Professor Paul van der Heyden from Leiden University - chairman of the Committee on freedom of Association and the ILO Governing Body and others.

Within the conference a high level meeting was held with the participation of Deputy Director-General of the International Labour Office, the former Prime Minister of Togo, Gilbert Hungbo and honorary professor of the University of Leuven, the founder of the International Encyclopedia of Law, Roger Blanpain.

During his stay in Leuven Professor Adel Abdullin and Ass.Professor Rustem Davletgildeev met with the vice rector of Culture, Diversity and Sustainability Policy of the University of Leuven, Professor Katlijn Malfliet, with Professor Paul Schoukens responsible for international student and academic mobility in the University of Leuven. The subject of discussion was the joint participation of Kazan and Leuven Universities in EU funded programmes: Erasmus + and Horizon 2020.

In 2004, in the framework of cooperation under the Tempus project the master's program in International and European Law has been opened at the Law Faculty of the Kazan Federal University, recent years actively functioning Erasmus Mundus program on academic mobility, currently two graduate students of International and European law (Lenara Klimovskaya and Anjelika Karikova) have a semester internship in Leuven University.

The trip was carried out with the support of the EU Centre – VOICES at Kazan Federal University.