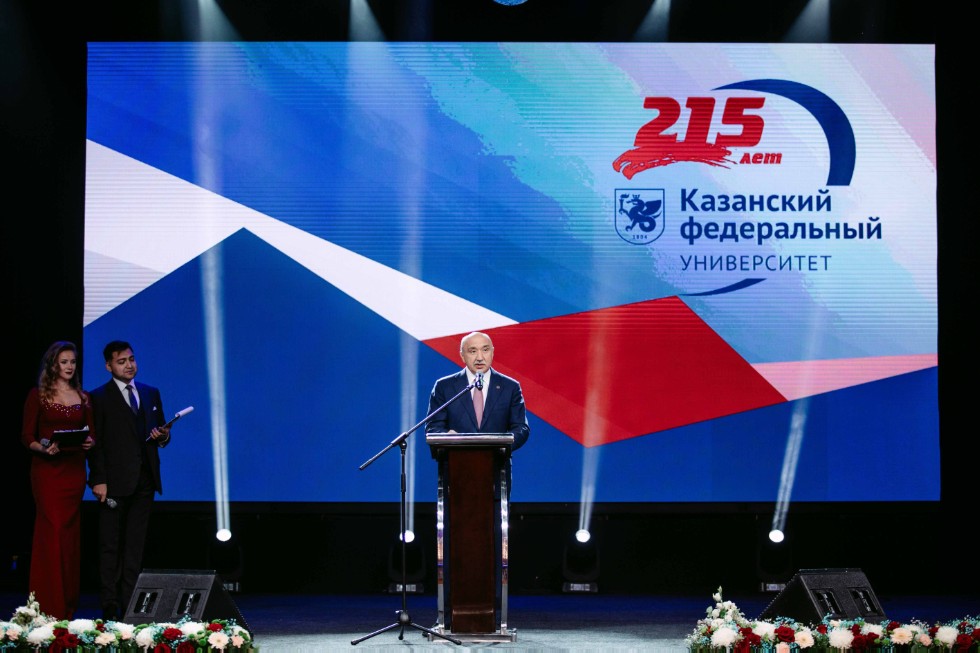 The event took place on the eve of 26th November.

In his welcome speech, Rector Ilshat Gafurov noted, “Starting as a classical educational institution, Kazan University became one of the largest universities of the country after merging seven higher education establishments, three medical facilities, and two secondary schools, and moved to a new level of development while transforming into a research university.”

All the honors were bestowed personally by State Counsellor, First President of Tatarstan Mintimer Shaimiev.

He said, “On behalf of the President of Tatarstan I want to congratulate you with the 215th anniversary of your university. In 2004, we celebrated KFU's 200th birthday. At that time, we honored Nikolai Lobachevsky, who was a great mathematician and a rector, and Mikhail Nuzhin, who built a new university, by laying wreaths to their burial sites. I should say that the university progresses in this new complicated environment. We are glad that it obtained the federal status, and Rector Gafurov has been heading it since then. We are on the right path.”

Prime Minister Aleksey Pesoshin joined the congratulations by emphasizing the importance of Kazan University for the Republic of Tatarstan. He gave collective awards (Letters of Appreciation from the Cabinet of Ministers of Tatarstan) to the teams of Yelabuga Institute and Lobachevsky Lyceum.

Wrapping up the gala dinner, Rector Gafurov thanked everyone for partaking, “I would like to express special gratitude to the President of our Republic, Chairman of the Board of Trustees and the Supervisory Board of the University Rustam Minnikhanov, without whose support and assistance many of our projects would not have been realized, and Mintimer Shaimiev, First President of Tatarstan, a man whom many of us consider our teacher, and who stood at the origins of the formation of our university in its new federal status.

“I would like to express my gratitude to all our partners: the Russian Academy of Sciences, universities of Russia, and our industrial partners for joint work and support.

“I would also like to thank the Government of the Republic of Tatarstan, our ministries and departments, the parliament members of all levels, the heads of administrations of cities and regions of our republic, and separately the mayor of Kazan, Ilsur Metshin, for his active participation in university life.

“Special words of gratitude to all our faculty, directors of institutes and their deputies, all our colleagues, employees of Kazan Federal University, which would never have reached such heights and would not have achieved such significant success without your support and fruitful work, without your love for students, science and alma mater.

“Many thanks to our veterans for many years of diligent work, for your experience, kindness and wisdom, and for the invaluable contribution to the development of science and education and the enlightenment of the youth.”