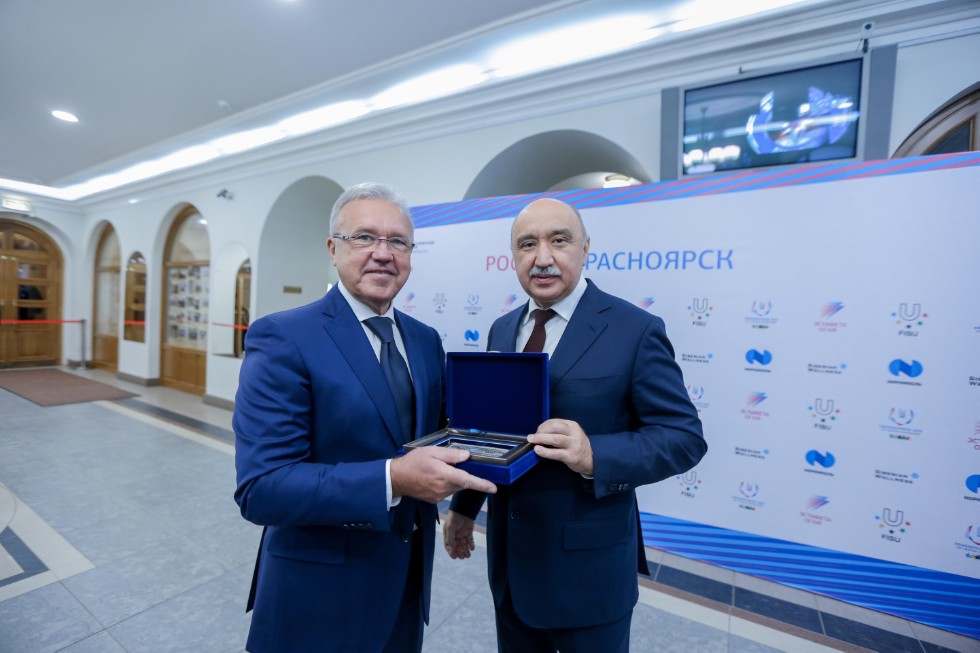 The governor held a meeting with Rector Ilshat Gafurov.

Mr. Uss was scheduled to spend 30 minutes at the university, but he was very keen to know more and decided to visit the Zoological Museum as well. During the meeting, Rector Gafurov held a brief presentation of KFU’s priorities and strategy. “By investing in new technologies, we have created a full cycle of research scaling, from labs to test production,” said he.

Governor Uss, who is also the President of Siberian Federal University, thanked the Rector and opined, “It’s surprising how you have progressed in such a short timeframe. Immense development can be seen. The university is part of this region’s foundation, and economy develops around it.”

In the afternoon, the guest attended the torch relay celebration in front of KFU’s Main Building. He arrived together with President of Tatarstan Rustam Minnikhanov and Mayor of Kazan Ilsur Metshin.

The torch relay started in Turin, Italy, on 20th September. In Russia, it goes through 30 cities, including Kazan which hosted the 27th Summer Universiade in 2013. The relay will end in Krasnoyarsk, the host city of the 29th Winter Universiade from 2nd to 12th March 2019.

The relay stage in Kazan passed many historical monuments and landmarks and ended at KFU campus. The fire itself was lit by President Minnikhanov, Governor Uss, and KFU postgraduate student Nafis Sirazetdinov. The government leaders then addressed the attendees.

In his interview, Alexander Uss emphasized that Kazan’s experience of hosting is very important for Krasnoyarsk, “Those are not just courtesy words. We have socialized much, and Kazanites have visited us. We will dispatch a sizable team to Tatarstan this December to refine organizing skills.” President Minnikhanov said that Tatarstanis are ready to share knowledge and wished Krasnoyarsk the same success that Kazan had enjoyed in 2013.