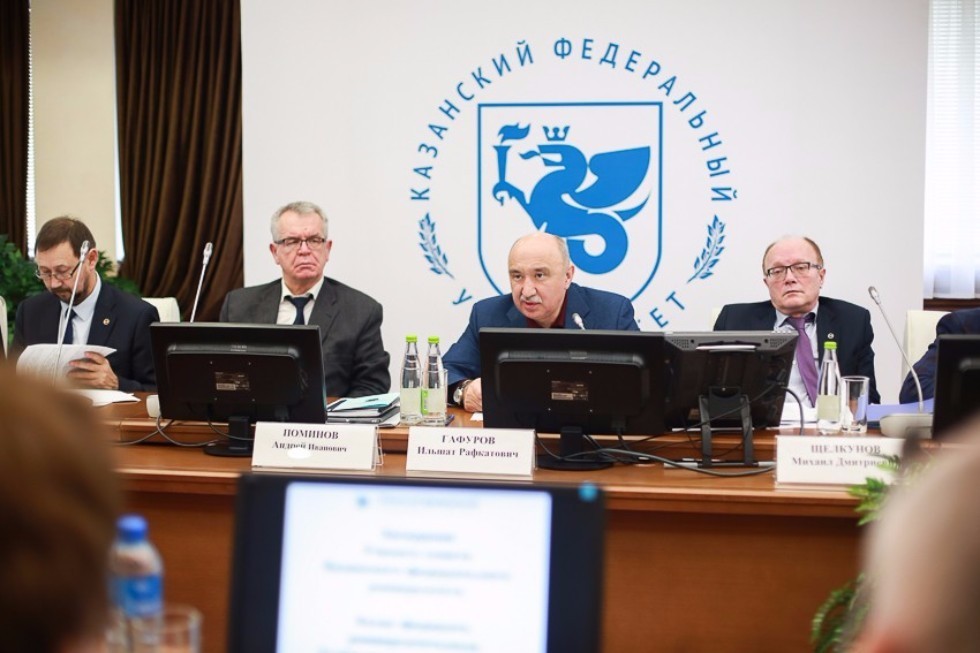 After a prolonged debate the Academic Council voted 44-to-33 in favor of petition.

The Academic Council, one of the top governing bodies of the University, convened for the first time this year on February 28th to discuss several important issues. The meeting was attended by First Deputy Minister of Education and Science of Tatarstan Andrey Pominov.

Among the questions raised by the members in connection with the merger were financing and rankings. KFU is currently in the race to achieve top positions in global rankings, so such a step must not be detrimental to this particular matter.

Rector Ilshat Gafurov suggested looking on the bright side. What's important, said he, is that the Institute of Geology and Petroleum Technologies will obtain a very convenient practice training base in Almetyevsk. All the students and graduates will be directly involved in the operational activities of Tatneft – one of the industry leaders in Russia. Curricula will be standardized as well, so that all the students could start their studies in Kazan and then transfer to Almetyevsk to continue their education and professional development on-site. Also, the Almetyevsk Branch (as the planned new division is tentatively named) will only concentrate on geology and petroleum, all the non-profile programs will be moved to other places. The same is planned for Naberezhnye Chelny Institute (machine building and engineering) and Yelabuga Institute (pedagogy and related subjects).

It's essential to mention, however, that the decision has yet to be made – the Ministry of Education and Science of Russia can only approve the merger after petitions from both universities are filed.

Some other topics were raised during the session. Namely, amendments to voting procedures for department chairs were adopted, admission rules for 2017 were approved, and new scholarship and welfare payment regulations were discussed and voted for.

Notable structural changes were also mentioned. In particular, it was officially decided that the University and Joint Institute for Nuclear Research will sign an agreement on the new Department of Nuclear Material Science of KFU on March 26th in Dubna. Secondly, the Tatar Pedagogy Center will be established at the Institute of Psychology and Education. KFU's experience in multicultural education has attracted attention from different regions of Russia, as evidenced, for instance, by yesterday's visit.

In other news, a new journal – aptly named “Kazan Messenger of Young Scientists (Magister Dixit)” – will be founded by the Institute of International Relations, History and Oriental Studies.

Finally, Rector Gafurov called for donations on account of the Lobachevsky Year. The Rector and vice-rectors will serve as examples and donate significant portions of their upcoming monthly remunerations to the cause. About 15 million rubles will be accumulated to fit out the Lobachevsky Memorial Room in the famous scientist's former house in the University's Main Building. Interestingly, the initiative has been supported by Tattelecom, a local telecommunications company. KFU and Tattelecom plan to coordinate their efforts in this endeavor.