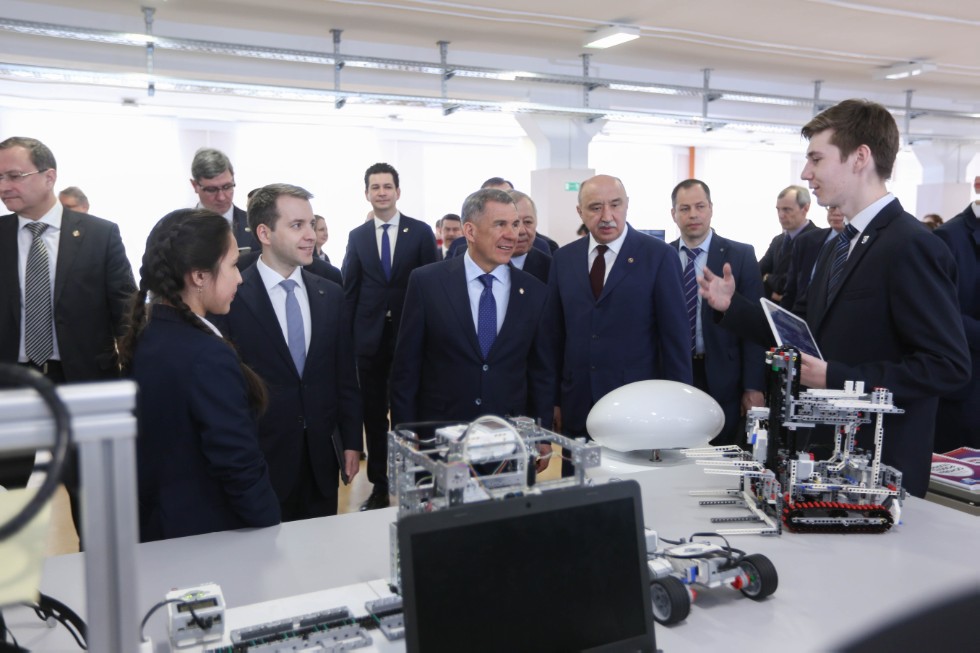 The Board’s 40th meeting was held at the Institute of Engineering on 6th April.

Rector Ilshat Gafurov welcomed the Board members and showed the latest achievements in robotics, 3D modelling, advanced materials, medical equipment engineering, and IT.

While opening the discussion, Chairman of the Board Nikolay Nikiforov said, “Today, we have witnessed a very impressive exposition of cutting-edge research and development within the Digital Economy Program and other areas.”

Digitization is one of the priorities for Kazan University. Thanks to interdisciplinary approach, KFU has succeeded in producing new types of medical equipment, including robotic simulators, bioprostheses, and software for precision measurements in archaeology and history. In the labs, Board members looked at an emergency services robot, a robotic football squad, and quadcopter-land robot coordination interfaces. The IT Lyceum presented robots created by its pupils.

Member of the Board, President of Tatarstan Rustam Minnikhanov noted, “We can see some serious changes and new competences of Kazan Federal University – very competitive, very in-demand, and today’s results have impressed us. The most important thing is that students are integrated into these processes, for which I can say thank you very much to the University. We are ready to further provide maximum support to you.”

Later, Rector Gafurov took the floor with a report on the University’s performance in 2017. He spoke about the five priority areas of the University and mentioned that 88% of the faculty are in some way involved in them. He added that KFU is also very successful in international rankings in humanities and social sciences despite almost all of the priority areas being in natural sciences.

Another important point of his speech dealt with the Fourth Industrial Revolution, “It’s important that we are not just talking about a virtual university with full-scale digitization. It’s a necessary part, but it’s not enough. The transformations must involve our core – science and education. They must be reshaped in line with the new trends – Big Data, Internet of Things, VR and AR, additive technology, robotics, genomics and proteomics, quantum computing, blockchain, AI, and other areas.”

Vice-Rector Marat Safiullin showed a presentation of the fourth stage of the University’s roadmap (2018 - 2020).

The Board approved reports, plans, and several major transactions in real estate transfer for the needs of test production and research.