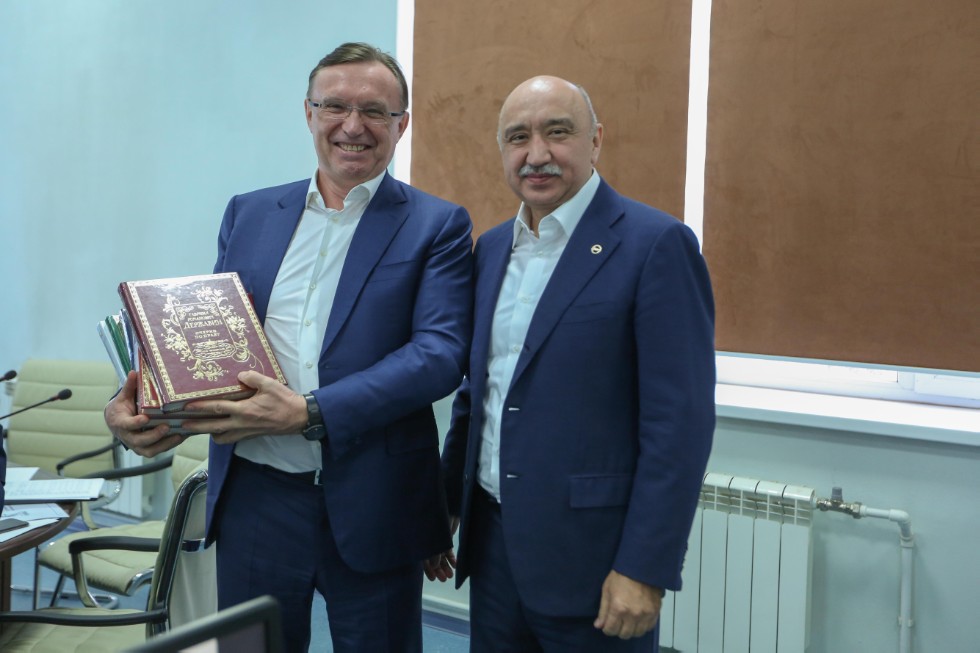 The future of Naberezhnye Chelny Institute and its Engineering Center was discussed.

Rector Gafurov welcomed the participants at the Engineering Center. He said that the Institute is very much linked to its city – Naberezhnye Chelny - and it needs to evaluate criteria of success to be in more fruitful cooperation with the local community.

Vice-Rector Marat Safiullin said, “The Institute started strong, but now both the business involvement and the publication activity have somewhat declined.” He noted, however, that the average remuneration for academics has steadily increased. The Vice-Rector’s suggestion was to more narrowly focus the Institute’s efforts, namely, to orientate it towards automotive industry subject rankings. There is a strategy in place to start moving in that direction. “We need to have at least three papers published in Web of Science journals, at least two world-level researchers, and we need to establish two centers of excellence and over fifteen world-level labs,” said Safiullin.

KAMAZ is one of the traditional partners of the Institute. According to the Director General, KFU currently supplies the majority of young professionals for the enterprise.

“Young people move from the city. It’s our pain because the best of the best are leaving. We have been concerned by this for a long time. We need high-quality engineering education programs like air, and we want to know what is to be done to make your strategy work,” answered Sergey Kogogin.  He said that the company is ready to finance the planned technological center, supervise teaching, and provide subsidized housing.

The meeting ended with discussions about successful cooperation projects. Dmitry Chikrin talked about driverless KAMAZ trucks in development, noting that 90% of components are homemade.

The city itself should show more interest to the university branch, opined Rector Gafurov. So far, there hasn’t been much support other than from KAMAZ, added he and proposed to create a workgroup for further progress. Such a workgroup, comprising representatives of KFU, KAMAZ, and the municipality of Naberezhnye Chelny, already started working.