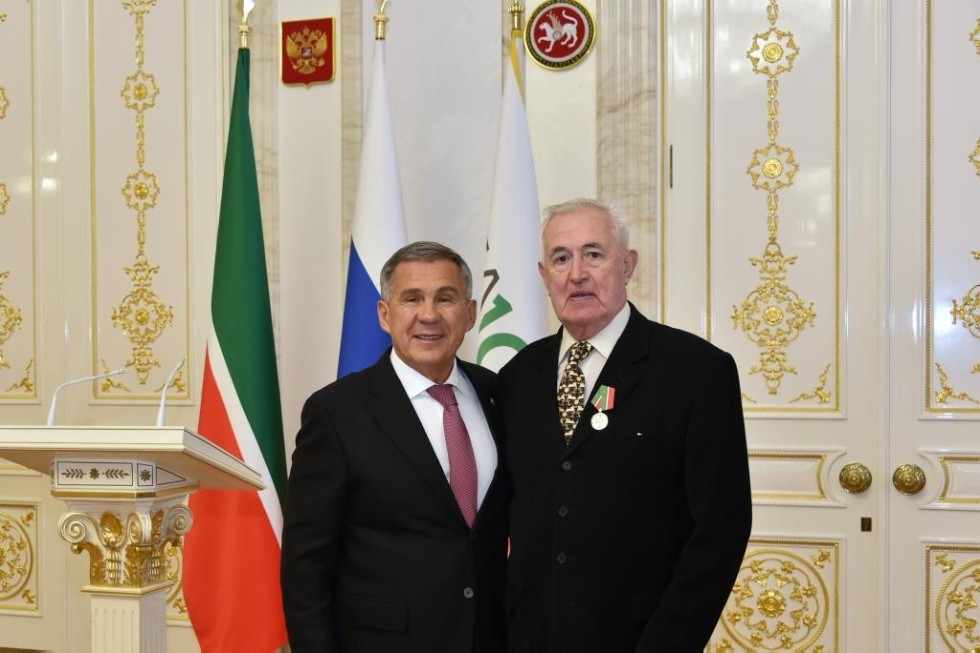 Rector Ilshat Gafurov was present at the ceremony of the State Prize in Science and Technology of the Republic of Tatarstan on 7th February.

This year, there were 19 recipients of the State Prize. Consulting Professor Konoplyov was one of them. The event was scheduled to celebrate the Day of Russian Science (8th February).

Before moving to the agenda, President of Tatarstan Rustam Minnikhanov mentioned his visit to KFU’s Archaeology Museum, “Scientists of various specializations and from all parts of the country have united to protect our historical heritage by implementing projects in Bolgar and Sviyazhsk. Kazan University offers the only historical restoration program in the nation.”

“Traditionally, State Prizes of the Republic of Tatarstan in science and technology are awarded on Russian Science Day. This year, the work of the Interregional Clinical Diagnostic Center in the diagnosis and treatment of diseases of the venous system was noted. It has earned approval from the Ministry of Health of the Russian Federation and is successfully used in other regions of our country,” he said, proceeding to give out the awards.

The next prize was awarded for creating amalgamators for the petroleum industry.

“In the year of the 100th anniversary of the founding of the Tatar Autonomous Soviet Socialist Republic, I want to note that throughout its history, the development of Tatarstan has been accompanied by an increase in scientific and cultural potential. A special page in the history of our republic is the activities of research institutes and universities during the Second World War. A number of scientific discoveries of scientists of the Tatar ASSR contributed to the strengthening of the country's defense capability, the development of medical science in its most difficult period,” added the President.

After receiving his commendation among the other participants, Dr. Konoplyov shared, “I learned only yesterday that the medal will be awarded. It was very nice to receive this award. In 1957, I came to university to study, and since then my whole life has been connected with Kazan University: I taught, headed the Department of Theoretical Mechanics for 30 years, I was vice-rector for international relations from 1986 to 1989, and from 1990 to 2001 I was the rector. I have many awards, but this is one of the most important.”

Keywords: State Prize in Science and Technology of the Republic of Tatarstan

Фотография из материала: Former Rector of Kazan University Yury Konoplyov receives the Medal of the Order 'For the Merit to the Republic of Tatarstan'