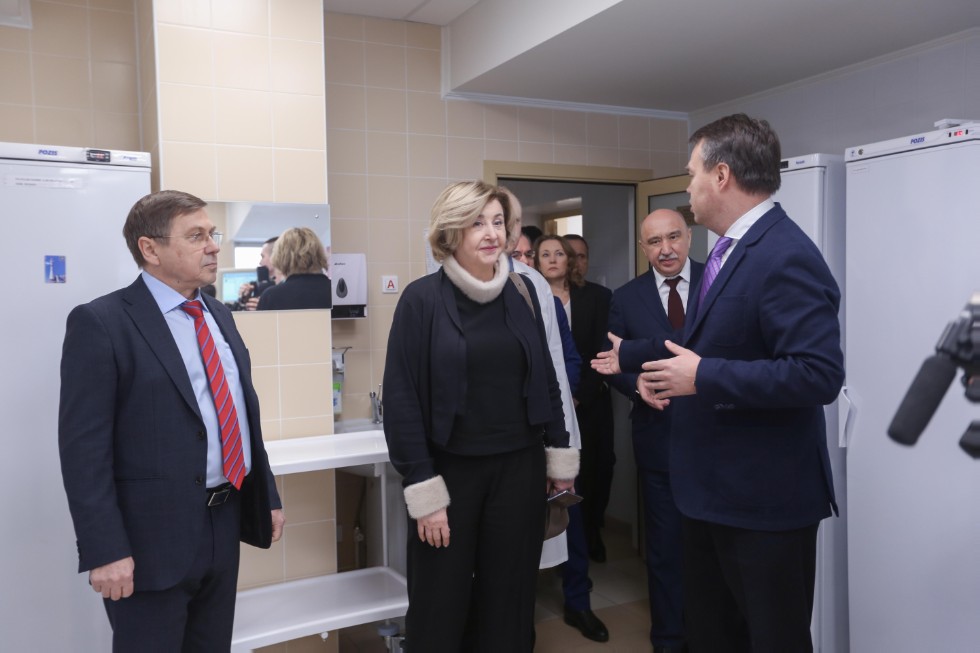 She arrived to the city with Vice-Premier of Russia Tatyana Golikova to assess preparations for WorldSkills Kazan 2019.

During her visit to KFU, Ms. Borovskaya first arrived to the currently renovated building which is assigned to the Institute of International Relations. There, Rector Ilshat Gafurov informed her that, among other offices, the building will welcome the Situation Center, the Center for US and Canadian Studies, and the Center for Latin American Studies. Notably, the building is under protection for its historical significance, yet another such object for KFU after the former military hospital (now the campus of the Institute of Fundamental Medicine and Biology).

The next stop was at the Research and Clinical Center for Precision and Regenerative Medicine (RCCPRM). This building on Volkov street houses the Biobank, the Cell Technology Center, and KFU-RIKEN Joint Lab. Rector Gafurov spoke in detail about oncological research and a new joint lab for NGS typing with Rusfond servicing the National Bone Marrow Donor Registry.

While at the RCCPRM facility, the Deputy Minister proceeded to hold a meeting of rectors of Tatarstani universities. The main point on the agenda was a discussion on national projects in science, education, and digital economy.

She emphasized that universities need to attract business partners and regional authorities to their initiatives. In that spirit, Rector Gafurov told the colleagues that KFU adheres to this very strategy. “What we are creating today at the Institute of Fundamental Medicine and Biology is 60% business,” said he.

Vice-Rector for Biomedicine Andrey Kiyasov talked about KFU’s biomedical cluster and its components, such as the Biobank, the Genomics Center, the Biomedical Microscopy Center, and various research facilities in pharmaceutics, neurobiology, and translational medicine. As an example, he presented the international MUSCLE-FANTOM project. The initiative is spearheaded by RIKEN and involves Russian and American scientists. As of now, much attention is directed towards studies of cardiac hypertrophy and amyotrophic lateral sclerosis.

Another topic of the discussion was education quality. “Average employment ratio for Russian graduates is 70%. There are too many young specialists on the market in some areas. I advise you to pay attention to government enrolment quotas,” said Borovskaya.

She added that universities are now the primary source of information about technological advancements for the national business.

In conclusion, the assembly talked about IT education. The Deputy Minister informed everyone that the Ministry is ready to assist universities in developing partnerships with industry and government sector.