Copper stearate proved to be promising for heavy oil oxidation 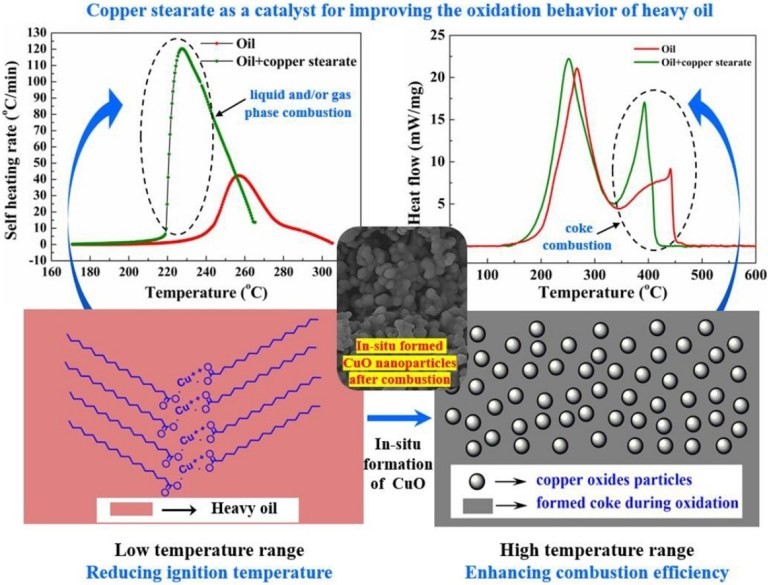 A paper by the Rheological and Thermochemical Research Lab appeared in Applied Catalysis A: General.

Copper salts have found place in many industries, from pharmaceutics to agriculture, but they are rarely seen in petrochemistry and petroleum extraction. But not for long, it seems, now that Kazan Federal University scientists showed that copper stearate can be a great catalyst for in-situ combustion and even improve oil quality under certain conditions.

As the authors explain, most of the existing oil oxidation catalysts are synthesized from transition metals. But their one setback is that they are not soluble in oil and therefore not distributed in its volume. Evidently, there is not much to expect from them as catalysts in that case. That’s why the researchers are looking for other compounds with high solubility and tried copper stearate. Its effectiveness was tested through high-pressure differential scanning calorimetry (HP-DSC) and adiabatic reaction calorimetry (ARC). The results were then compared to the already studied nickel stearate, iron stearate, and copper oxide. Copper stearate showed good results – it enhances oxidation, reduces activation energy, induction time, and combustion temperature, and increases coke burning efficiency. Its activity spectrum was also studied.

Furthermore, copper stearate then dissipates into nanoparticles of copper oxide, which activates later in the reaction. The catalytic effect is many times more pronounced than during the use of just copper oxide. The researchers link this phenomenon to the fact that copper stearate is oil-soluble and thus serves as a means of transport for copper oxide.

“Based on this experiment, we can firmly say that our catalyst works for both low-temperature and high-temperature oxidation,” says paper co-author Yuan Chengdong. “It may also affect cracking and pyrolysis, but we cannot definitely determine that with our methods.”