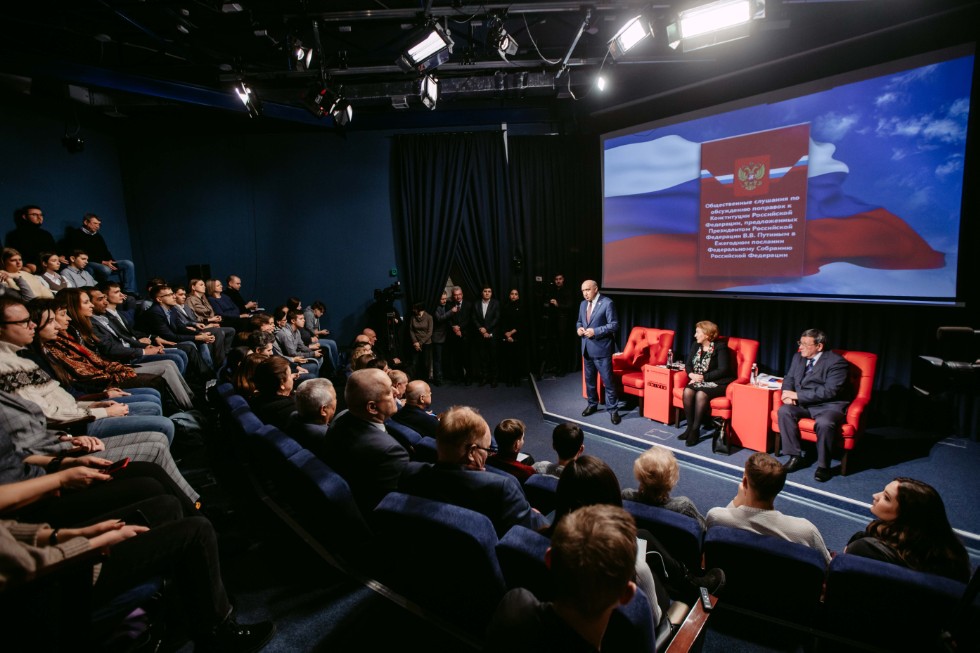 The meeting was held in the show room of the Higher School of Journalism on 10th February.

The three main speakers were Rector Ilshat Gafurov, Chairperson of the Public Chamber of Tatarstan Zilya Valeeva, and Chair of the Department of Constitutional and Administrative Law of Kazan University Yevgeny Sultanov (who is also a member of the expert panel on the amendments convened by the President of Russia).

The audience comprised students, educators, and members of the Public Chamber and the All-Russia People’s Front.

In his opening speech, Rector Gafurov noted that this year’s Presidential Address to the Federal Assembly is a milestone.

“We are very glad that our colleague [Yevgeny Sultanov – editor’s note] ended up on the expert panel, and another representative of the Republic of Tatarstan is the Chairperson of the State Council Farid Mukhametshin,” he said.

Zilya Valeeva informed the gathering that the amendments are currently being discussed by the civil society, including the members of the Public Chamber of Tatarstan, “The majority of our population is unequivocally accepting of the list of amendments pertaining to social issues.”

Apart from that, she said, there are questions requiring further clarification, and that Constitution is a comprehensive unified documents, so it’s inadvisable “to pull out separate bricks” from it.

Yevgeny Sultanov talked about the workload of the expert panel, “Our group of 75 people is divided into 5 groups. I am a member of the subpanel on the judicial powers and the Procuratorate. We were the first to finish our proceedings. It so happened that this subpanel had a very strong roster of lawyers. We quickly went through the proposals.”

The most complicated issue, according to him, was the number of the Justices of the Constitutional Court, “Why eleven? We argued a lot about this and even applied to the Presidential Administration. Many people felt that we should have nineteen Justices, as it is now. However, the Administration provided persuasive arguments, and we agreed to the leave eleven Justices.”

Sultanov opined that the greatest shortcoming of the existing Constitution is the gap between the state governance and the municipal administration.

Later in the meeting, Dr. Sultanov answered the audience’s questions.