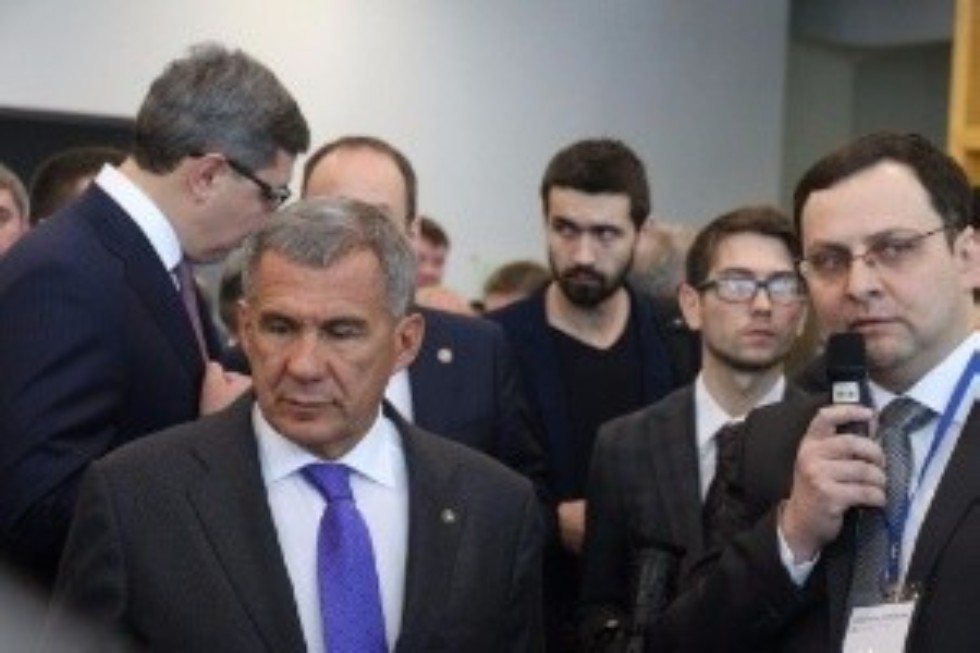 On 2-3 February within the framework of the final collegium of the Ministry of Information and Communication of the Republic of Tatarstan was held an exhibition of IT technologies. The Higher Institute of ITIS presented several projects; for example, development of algorithms for the "Engineer" robot, the virtual reality in the helmet HTC Vive "VR Lookout" and a complex of surgical operations simulations for virtual reality "Virtual Surgery". Rustam Minnikhanov tested VR of the 3-D picturesque landscape.

"VR Lookout" is a virtual space where you can enjoy relaxing music, wind noise, see a beautiful valley from the top of the mountain. The developers of the laboratory "Digital Media Lab" of the Higher Institute of IT IS worked on this project for several weeks.

Professor Evgeni Magid, a Head of the Intelligent Robotics Department of the Higher Institute of ITIS (KFU) and a Research Assistant of the Laboratory of Intelligent Robotic Systems (LIRS) Roman Lavrenov presented to the President the project: "A group of heterogeneous robots: algorithm development for searching the route in search and rescue conditions".

Evgeni Magid told in details about the modeling and development of algorithms for the Russian robot "Engineer". Its manufacturer is “Servosila” company. This is one of the best Russian robots today. LIRS has the most modern equipment that allows to conduct demanded, high-quality and competitive scientific researches.

Potential users of the robot are Ministry of Emergency Situations, fire services, national security. The robot can be involved in search and rescue operations and can be used in the conditions of chemical and radioactive contamination. The scientists plan to make the robot autonomous, so that the machine can independently use certain path search algorithms and additional intelligent functions, for example, the recognition of a wounded person buried under rubble.