For a third year in row students of the Laboratory of intelligent robotic systems win a competition 'Student of the year of KFU'
Main page \ Academic Units \ Physics, Mathematics and IT \ Institute of Information Technology and Intelligent Systems \ Research \ Laboratory of Intelligent Robotic Systems \ News 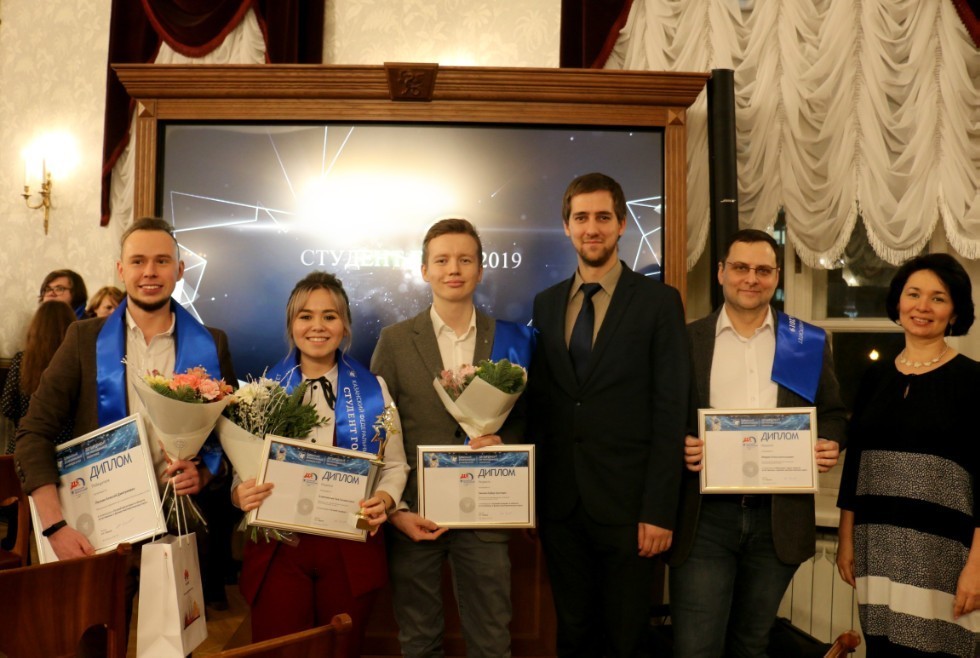 Every year Kazan Federal University hosts the "Student of the year – 2019" competition. Traditionally, summing up the results of the year, KFU announces and honors its best students, who have represented the University at conferences and competitions and festivals of various levels.

Students, who have good academic achievements and take an part in the scientific, social, sports and cultural life of the University very actively, can apply for participation in the competition "Student of the year of KFU – 2019".

On December 19, 2019 in the Assembly hall of the Cultural and Sports Center "UNICS" (CSC "UNICS"), a solemn announcement of the laureates and winners of every category took place. Aufar and Ilya became winners in two categories.

Since September 30, Ilya has been studying at the University of Messina, Italy, on the program "Engineering and computer science" (Ingegneria e Scienze Informatiche) within the framework of the "Erasmus+" program, which will last for 1 semester. Ilya participated in the contest via Skype. He is actively engaged in mobile robotics, developing software for the Russian crawler robot "Servosila Engineer" at the LIRS. Today Ilya is the author of 3 scientific publications, 2 of them are indexed in the Scopus database. Moreover, he has one certificate of state registration of electronic computing machine.

Aufar started participating in LIRS projects, while he was studying on the 4th year of bachelor's degree and doing his graduate work on robotics. It was the first year of his activity at the LIRS, and he continued his work in the laboratory as an employee, while studying on the master's program. Now he is a post-graduate student and he is teaching a course on C++ programming; moreover, he is engaged in research in the field of swarm robotics. For now, he has published 8 articles indexed in the Scopus abstract and citation database (including Q2, Q3, and Q4 issues), 4 articles indexed in the Web of Science scientific citation database and 4 articles indexed in the RSCI, bibliographic database of scientific publications in Russia. According to the Scopus, Aufar’s h-index is 2.

Aufar expressed gratitude to the Higher Institute of ITIS:

“The Higher Institute of ITIS is a place, where you can develop in different directions and take an example from the best specialists in the IT field. Thanks to the Institute for the given opportunities, knowledge and skills”.

Let us remind that in 2017 an employee of LIRS and senior lecturer of the Higher Institute of ITIS Roman Lavrenov took part in the competition in which he became the winner in "Best post-graduate student of KFU in the field of natural and physico-mathematical sciences" nomination. In 2018, the competition was attended by Ksenia Shabalina, a graduate student of the "Intelligent robotics" master’s program, who became the winner in the category "Best master's student in the field of natural and physical and mathematical sciences".

Ôîňîăđŕôč˙ čç ěŕňĺđčŕëŕ: For a third year in row students of the Laboratory of intelligent robotic systems win a competition 'Student of the year of KFU'