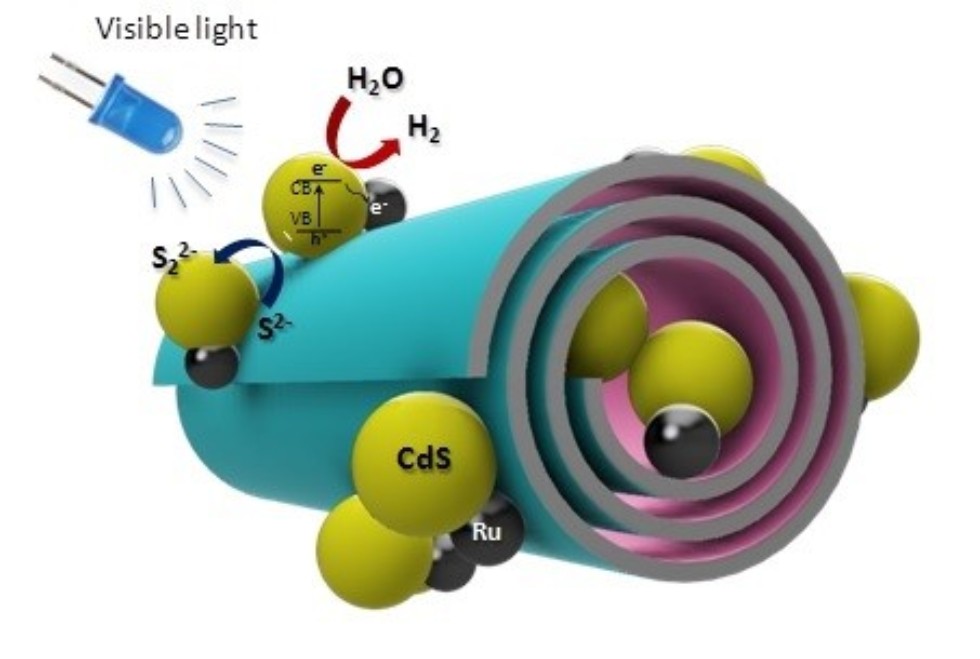 A joint paper by Kazan Federal University, Boreskov Institute of Catalysis, and Russian Oil and Gas University was published in Chemistry - A European Journal.

The team produced and studied new active photocatalysts based on natural aluminosilicate nanotubes with cadmium sulfide quantum dots stabilized on their surface synthesized by self-assembly.

Co-author, Chief Research Associate of the Bionanotechnology Lab (Kazan Federal University) Rawil Fakhrullin explains, ”Quantum dots are semiconductor nanoparticles up to 10 nanometers in size with unique optical properties. They have found applications in many industries, including photonics, sensor technology, and biomedicine. A joint study has shown that the use of natural aluminosilicate nanotubes as carriers for quantum dots of cadmium sulfide makes it possible to create efficient and low-toxic photocatalysts that are active under visible radiation.”

The studied photocatalysts are nanotubes with an inner diameter of up to 20 nanometers, on the surface and inside of which about 50 nanoparticles of cadmium sulfide, doped with ruthenium as a co-catalyst, are formed. This inert metal is used in electronics and as a catalyst and anti-corrosion additive.

“We have developed a method for self-assembly of nanoparticles on the surface of natural nanotubes, which was used to synthesize quantum dots of cadmium sulfide. Its application made it possible to increase the quantum yield of the reaction of hydrogen evolution from aqueous solutions to more than 9%. We chose ruthenium as a co-catalyst. It is known that the addition of small amounts of ruthenium leads to an increase in the activity of such photocatalysts tens and hundreds of times. Its use made it possible to prevent side processes of charge redistribution and reactions that reduce the amount of evolving hydrogen. It is interesting to note that the stability of these photocatalytic systems is greatly influenced by the ratio of sulfur to cadmium in a sulfide nanoparticle; upon reaching a certain value, the stability of the system sharply decreases,” says Russian Oil and Gas University employee Anna Stavitskaya.

Dr. Fakhrullin opines that photocatalysts are one of the most promising areas of modern chemistry. They use the most affordable source of energy - sunlight.

“Photocatalysts can be used to decompose water into oxygen and hydrogen, which will make it possible to obtain safe and environmentally friendly fuel in unlimited quantities. With the help of photocatalysts, it is possible to create self-cleaning surfaces (for example, windows that do not need to be washed), easily sterilizable medical instruments that will disinfect light, and also purify water from organic contaminants and pathogenic microorganisms. Heterogeneous catalysts used for photocatalysis should not only have the ability to accelerate the reaction, but also be stable and not cause toxic effects on living systems. This can be achieved by the simultaneous use of ruthenium, quantum dots and halloysite nanotubes,” says he.

In this paper, the results of a study of the effect of a system based on natural halloysite nanotubes and quantum dots of cadmium sulfide synthesized on its surface in situ on the nematode organism (distribution of nanomaterials in organs, body length, and reproductive capacity) are presented.

“Investigation of nanostructured photocatalysts in vivo in nematodes showed no acute negative effect. The developed photoactive nanomaterials were not detected in tissues outside the intestinal tract of soil nematodes, which is a good indicator for nanosystems, many of which penetrate into organs and tissues and negatively affect the body,” concludes Fakhrullin.