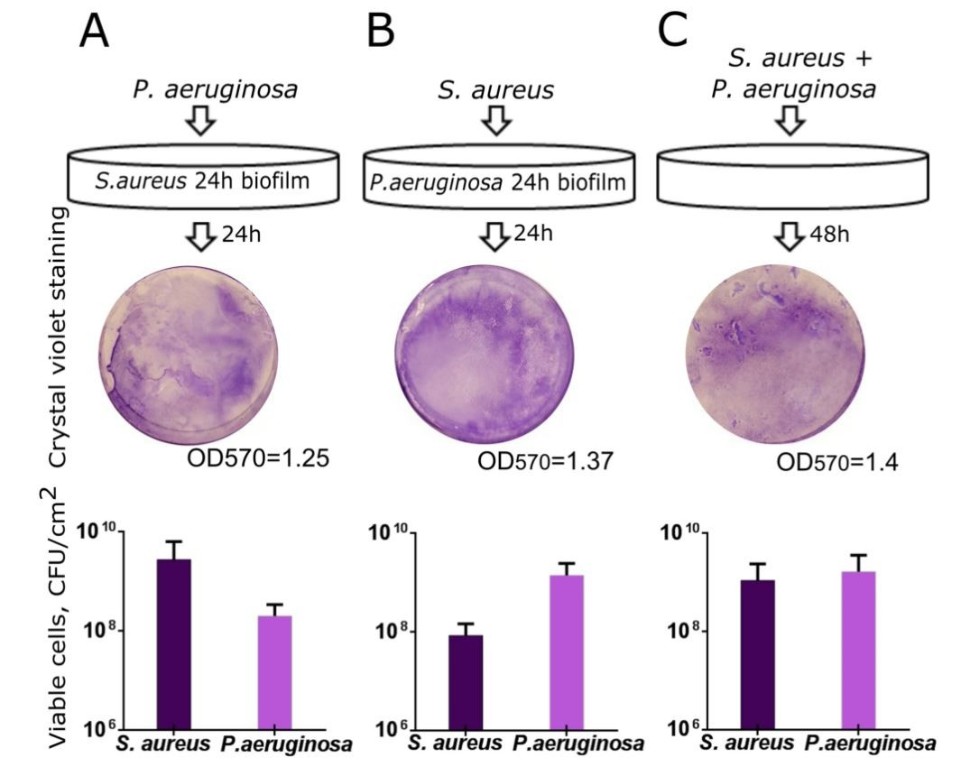 Staphylococcus aureus metabolites were found to enhance effects of antibiotics.

“Most infectious diseases in humans and animals are in one way or another associated with the formation of biofilms - microbial consortia immersed in the high molecular weight matrix they release, consisting of proteins, nucleotides and polysaccharides, which determines the extreme resistance of bacteria to adverse factors, including antibiotics and the body's immune system. The presence of pathogenic bacteria in the biofilm composition significantly reduces the effectiveness of antimicrobial therapy and significantly slows down the wound healing process,” explains co-author, Associate Professor Airat Kayumov (Department of Genetics). “In mixed biofilms, synergistic and mutualistic interactions are observed between bacteria, as a result of which the treatment of mixed infections is much more difficult and prolonged. For example, biofilms of Staphylococcus aureus and  Pseudomonas aeruginosa are very difficult to treat, and in cases of cystic fibrosis, they are often fatal.”

This particular research has shown that S. aureus is able to form cell conglomerates in the P. aeruginosa biofilm matrix, which is one of the reasons for its low susceptibility to antimicrobial drugs in mixed infections, probably due to the protective properties of the Pseudomonas biofilm matrix. At the same time, the effectiveness of broad-spectrum antibiotics, which are active against both S. aureus and P. aeruginosa, increases tenfold or more against a mixed community.

“When we treated monocultures with antibiotics such as ciprofloxacin and gentamicin, all the bacteria in their composition were insensitive to these drugs, but in the mixed culture, most of the cells died. We have proved that the introduction of acellular culture fluid of Staphylococcus leads to an increase in the effectiveness of antibiotics against Pseudomonas aeruginosa. Apparently, staphylococcus aureus produces some kind of metabolites that enhance the effect of antibiotics,” says the interviewee.

The team currently concentrates on identifying such metabolites and evaluating their status as antibiotic enhancers.

“In 2018, scientists from the University of California, San Diego showed that the introduction of non-hemolytic staphylococci can be successfully used to treat atopic dermatitis. We also showed that the addition of Staphylococcus or its acellular culture fluid to the formed biofilm of the pseudomonas significantly reduces the viability of bacteria,” concludes Kayumov.

The scientists hope that the scientific data they obtained will help in the future to increase the effectiveness of antimicrobial treatment of wounds infected with nosocomial pathogens through transplantation of skin microflora.