Experts KFU: "Solving the problems of children of migrants depends on the policy of the state"
Main page \ Academic Units \ Humanities \ Institute of Psychology and Education

Experts KFU: "Solving the problems of children of migrants depends on the policy of the state" 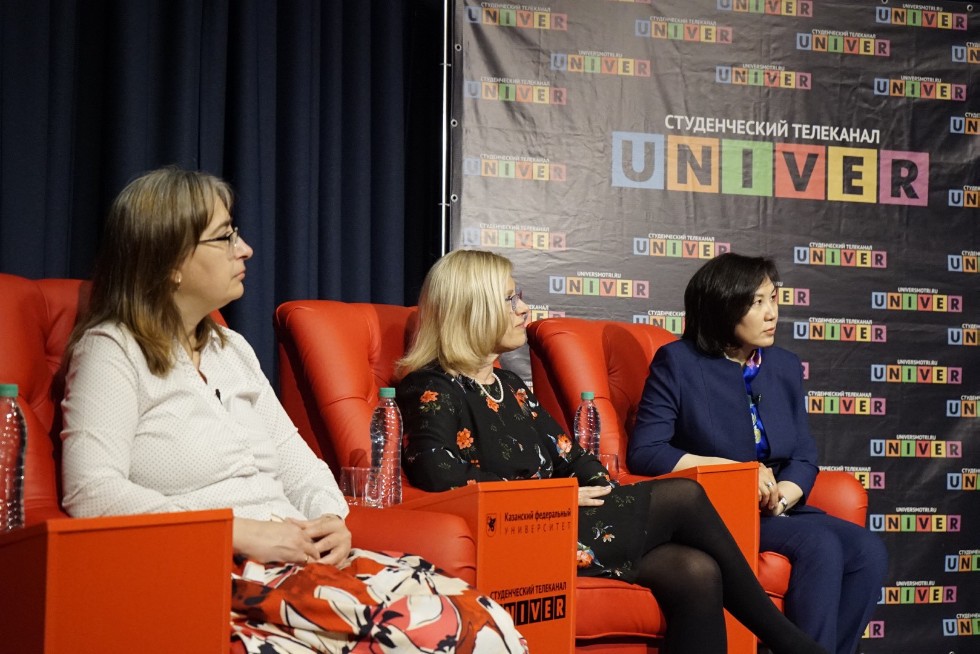 On Tuesday, in the showroom of the Higher School of Journalism and Media Communications of KFU, an international discussion about the practice of adaptation of children of migrants began.

Russian and foreign scholars who came to Kazan to take part in the annual IFTE International Forum on Teacher Education, during a meeting of the next television discussion club on the topic “Migrants and school”, determined the best ways to integrate migrant children into new socio-cultural conditions by means of education.

For a start, Mahabbat Kenzhegaleeva proposed to come to a consensus on the understanding of the term “multiculturalism”.

- It is important to understand whether we understand multiculturalism as what they understand in Russia, America or Bulgaria. Indeed, as practice calls for, due to the lack of a general concept of understanding migration, there is a certain understanding of this phenomenon within various international organizations. Thus, for example, the UN adopted the definition that “a migrant is an individual who changed their place of residence temporarily or permanently and settled in another country, or in his own, but in another region in accordance with the laws of this state”. That is, the person who moved into the country is a migrant. And his children are not.

- Along with economic migrants, there is another category of refugees. And society shows sympathy for them.

Dina Birman recalled that America has always been a country and a nation of migrants.

- Now the percentage of the population who were not born in America is about 24. That is exactly the same as it was at the beginning of the 20th century.

Experts agreed that the policy of multiculturalism in many respects depends on the migration flows in the country when they come in whole families. And here come the problems of modern language problem. It is especially hard for teachers to have such children go to school as high school students.

Professor of the Sofia University stressed that, despite the small number of migrants in Bulgaria, even their main problem is the lack of knowledge of the language of migrants and their children. The problem of adaptation of children among peers is solved at the state level.

- Until recently, we had a practice that children first learn the language and only then go to school. Now a different approach is taken: children learn language at extra classes right away at school, which contributes to a more comfortable entry into society.

Unfortunately, in Russia the state does not provide schools with textbooks, methods and translators adapted for visitors.

- In Russian schools there are no centralized practices for the language adaptation of migrant children. Teachers are forced to work with them individually. We studied the experience of Tatarstan, St. Petersburg and Moscow. Some schools have organized Russian language courses, but this is not a common phenomenon, shared Chulpan Gromova.

Meanwhile, in 2016, employees of the Institute of Psychology and Education developed the program “Migration Pedagogy”. As part of it, KFU specialists conducted a series of studies in schools with a high percentage of migrant children on the subject of attitudes and attitudes of teachers and workloads. In addition, the curriculum of courses “Modern Content and Technologies for Teacher's Activities in a Multicultural Educational Environment” developed by IPO KFU scientists was approved and financially supported by the Ministry of Education and Science of the Republic of Tatarstan.

The experts of the discussion club noted that, in addition to Russia, there are no centralized practices for the adaptation of migrant children in Italy, the Czech Republic and a number of other European countries. But in Sweden, France, Finland, Belgium, preparatory classes for children of migrants are implemented.

- Officially, this category of citizens as a “migrant student” is not provided for. Therefore, no government training programs are provided for them! - Associate Professor of IPO KFU.

- We need a special program for these children and we need special teacher training. In Russia, unfortunately, there is no funding for this. Therefore, the school is left alone with this problem and tries to solve these problems on its own enthusiasm, ”Reseda Khairutdinova said.

- Germany is a federal republic, and language issues are the responsibility of individual federal subjects. Otherwise, the problem does not solve! After all, the overall situation in Germany is such that, according to 2017 statistics, the percentage of people who are called representatives of the migratory underground in Germany amounted to 23 percent of the total population of Germany.

Interesting is the experience of Saxony, which in 2000 conceived the concept of migrant integration. First of all, we are talking about integration at the language level and at the same time learning the native language. If the school has a large number of migrants, then they introduce courses that are not included in the main program in the study of their native language.

The second activity is integration into the educational environment. Because there is no education - there is no chance to integrate into society.

The language problem is solved as follows. During the first meeting of the parents and the school administration, all documents are checked, the level of knowledge of the German language and is distributed into classes. If the knowledge of the language is minimal, then the student goes to a special class - this is the first level of language adaptation. The duration of training in special classes depends on the individual characteristics of the child. Having mastered the level necessary for the mastery of knowledge, the child begins to walk with ordinary classes on a number of subjects: drawing, physical education. At this level, the child is also monitored, and when the children have reached the required level of language skills, they have been able to integrate into the general learning process, they are transferred to a regular class, a professor at the University of Leipzig shared her interesting experience with migrant children.

Professor at the University of Miami stressed that the older the class, the more time it will take to learn the language and adaptation.

- There are differences between children who arrived at an early age and those who arrive later. And for them the different problems of language learning and adaptation. The little ones will start talking fast. And for older children in America, there are special schools where migrants during English lessons are taken to in-depth study of the language for foreigners. And in New York and other large cities there are already separate schools for migrants, where all students are migrants who have arrived in the last three years. And they are taught subjects and language already on a special program.

Responding to a question from a teacher in a Kazan school, how to evaluate the children of migrants who study on a par with children who know the language well, Lucia Bombieri explained that in Italy they are diagnosing a child for this.

- As a result, we get a picture, what is the level of knowledge of the language of a student, how wide is his outlook. Based on the results of diagnostics, teachers determine which class to send the child to and coordinate their actions to help them adapt.

Summing up the discussion, experts recognized that the most relevant and important is language support for children. In most countries, language learning is centralized; for this, the states have legislation that regulates this issue. Moreover, the receiving party teaches not only its own state language, but also continues to develop the skills of the child’s mother tongue.

Summing up, the doctrine emphasized that in many respects the solution of the problems of migrant children is due to the policy of the state.

Record of the program Discussion club of KFU "Migrants and school"

Keywords: Experts KFU: 'Solving the problems of children of migrants depends on the policy of the state'