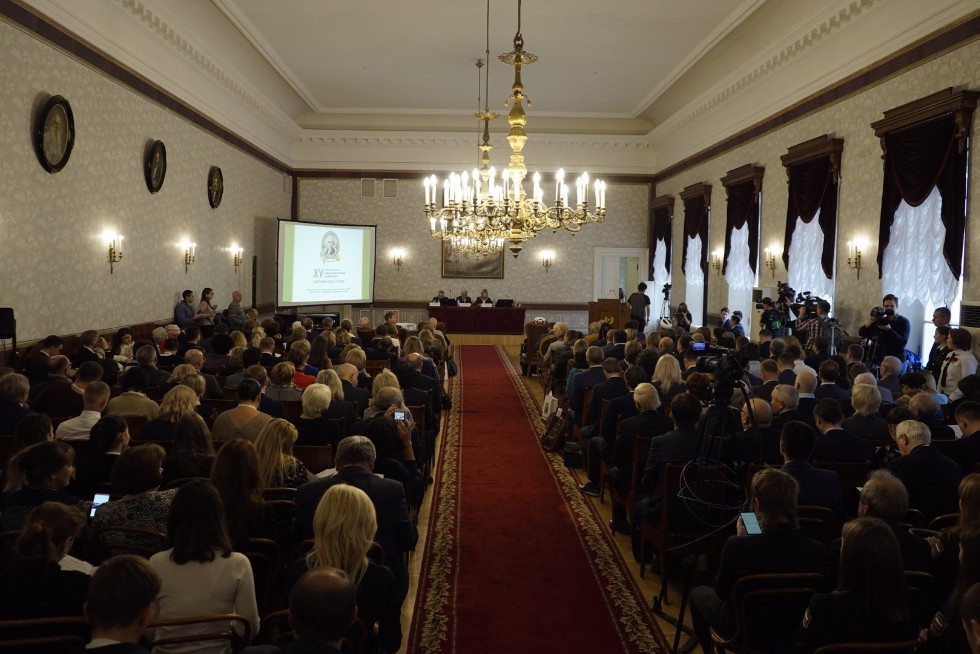 A major conference on law and humanities was held at KFU on 17th – 19th October.

Chairman of the State Council of the Republic of Tatarstan Farid Mukhametshin, Deputy Prime Minister and Minister of Education and Science of the Republic of Tatarstan Rafis Burganov, Chairman of the Committee on Natural Resources, Property and Land Relations of the State Duma Nikolay Nikolaev, Archbishop of Kazan and Tatarstan Theophane (Russian Orthodox Church), Advisor to the Mufti of Tatarstan Ravil Zuferov, Rector of the Russian State University of Justice Olga Alexandrova, Rector of Kazan Federal University Ilshat Gafurov, and a descendant of Gavriil Derzhavin, Nadezhda Bestuzheva-Gregory, took part in the opening ceremony on October 18.

After the greetings by Ms. Alexandrova and Mr. Mukhametshin, Dr. Gafurov addressed the audience, ‘I am pleased to welcome you to the historical Emperor Hall of Kazan University, the institution which this year marks its 215th anniversary. For the fifth year in a row, together with the Russian State University of Justice, we have been holding the Derzhavin Readings, dedicated to our famous countryman Gavriil Romanovich Derzhavin, so that through the prism of his state and literary activities we could address the urgent problems of the development of the Russian state and modern society and suggest ways to solve them. This year the conference is dedicated to the sociocultural and moral traditions of Russia as the basis for the development of law and legal education of the 21st century, and this choice is far from accidental. Derzhavin has always been a man of high morality and crystal honesty and an unbending fighter for the ideas of citizens’ conscience. Derzhavin is one of the brilliant students of the Kazan Men's Gymnasium, which once gave rise to Kazan University. Maps of Kazan and the Kazan Territory compiled by Derzhavin during his studies were recognized as exemplary. Today, referring to the personality of Derzhavin, to his literary and legal research, we not only reflect on the ways of the development of our state, but also try to find answers to many questions posed in his writings - anti-corruption, highly regulated legislation, the activities of control and oversight bodies, and the imperfection of the legal system.’

Olga Alexandrova was then awardee with a letter of appreciation from the President of Tatarstan. First Vice-Rector of the Russian State University of Justice Dmitry Guryev received a similar award from the Government of Tatarstan.

After that, Ms. Bestuzheva-Gregory and Mr. Zuferov also extended their greetings.