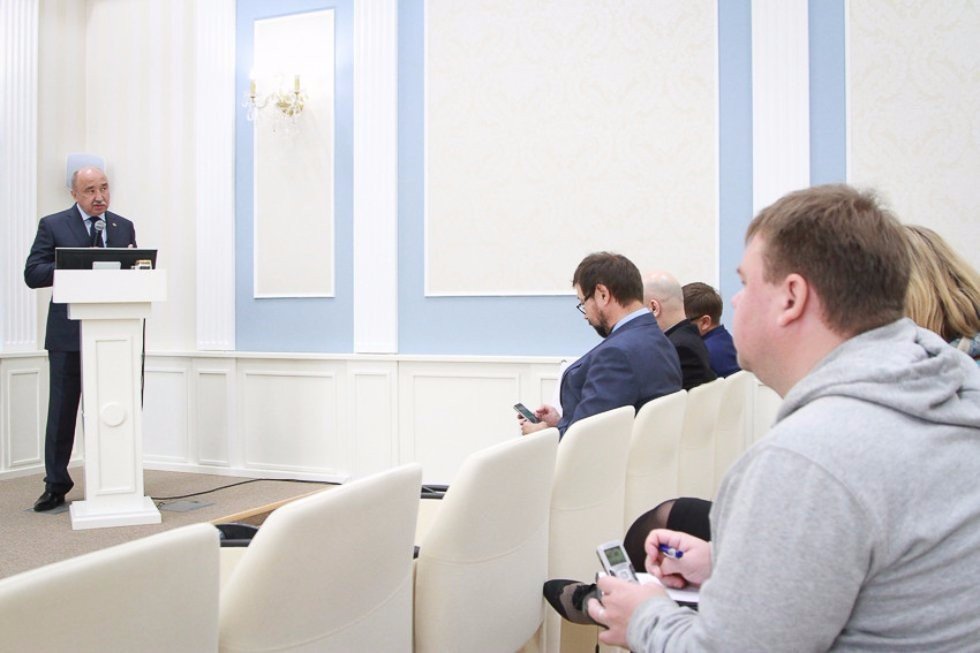 Kazan University ranked 301- 350 in THE Rankings this year, fourth among Russian universities.

First of all Dr. Gafurov said that participating in rankings helps promote the University among potential enrollees. Of the three influential rankings – THE, QS and ARWU – Kazan University is present in the first two and shows good progress in both.

The zeitgeist dictates that scientometrics is the major parameter for evaluating performance of academic institutions.

Dr. Gafurov mentioned that a significant number of publications and citations is interpreted as a sign of the high professionalism of a particular university's faculty and researchers.

This was the major reason for KFU's success in rankings. The number of publications has risen from 280 a year to 1543 in the last five years. Their quality has been improving as well. That's why the citations for KFU's papers also have grown steadily and significantly. That the University's priorities are in line with the scientific world's agenda also helps – the publications are pertinent and interesting to peers around the globe.

Rector added, «The previously made statement that our university turns from strictly educational to research and entrepreneurial becomes more and more relevant». KFU is now placed 317th by industry income in THE Rankings – threefold growth in five years.

The number of overseas students has risen from 3.1 percent in 2013 to 7 percent in 2015. One of the things that they undoubtedly find very appealing is the presence of English-language majors. Full five-year courses are already available at the Institute of Fundamental Medicine and Biology. Other institutes try to keep up, there are several master's programs in English as well.

A choice of partners is very important. Conveniently enough, the first days of October will be signified by the signing of another cooperation agreement with RIKEN and Juntendo University – this time it's to create an IT clinic at KFU, a medical simulation center at Juntendo and a genetics lab headed by Dr. Yoshihide Hayashizaki.

After the opening speech Dr. Gafurov answered the media's questions.

- We are tasked with entering the top 100 world universities. You can now see the results already achieved by KFU in this regard. As you know, we cannot point at the exact position KFU now occupies in THE Rankings because only the first 200 have that specified. We are in the 301-350 group. Among Russian universities only MSU, SPbSU, and Tomsk Polytechnic are ahead of us.

- Which research disciplines are among the most cited?

- Every scientific journal has its own impact factor. Citations, in turn, depend on how many people are engaged in research in particular areas. First and foremost those are the KFU's priority areas. Obviously, natural sciences are more popular among foreign peers than humanities. Many papers in, let's say, philology are very specific and don't attract much attention abroad. Concomitantly, many publications on historical or political matters show the difference in our and foreign researchers' views, so they are not accepted at overseas journals.

- How strong is the detriment from the sanctions to the KFU's researchers?

- I wouldn't say that we feel any pressure in academic fields. The sanctions and the current economic crisis don't hurt our financial performance. The University's budget in 2014 was over 7.9 billion rubles. This is not the biggest number in Russia, for example, Higher School of Economics had 14 billion rubles. In 2015 we expect the budget to increase by about 500 million.