Hydrometeorology and Ecology: Scientific and Educational Achievements and Development Prospects 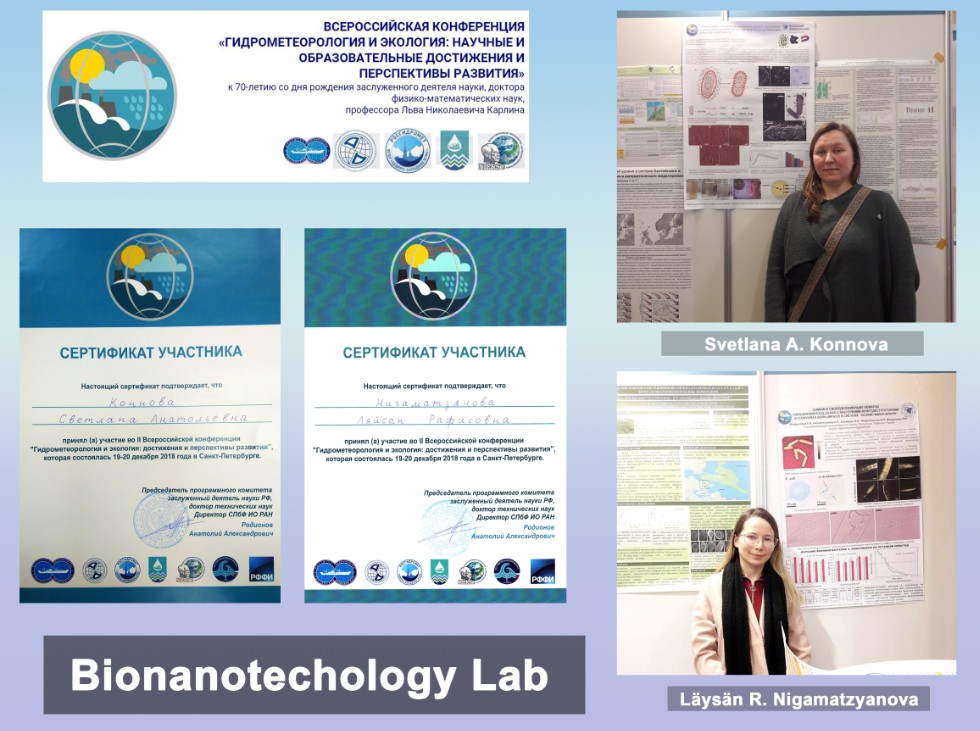 From December 19 to December 20, 2018, the All-Russian Conference "Hydrometeorology and Ecology: Scientific and Educational Achievements and Prospects for Development" took place in St. Petersburg. It is timed to the 70th anniversary of the Honored Scientist, Doctor of Physical and Mathematical Sciences, Professor Lev Nikolaevich Karlin, a scientist and teacher who has made a huge contribution to the development of science and the education system in the field of hydrometeorology, ecology and other related Earth sciences.

Our employees made presentations on the following topics:

“The symbiosis of free-living nematodes Caenorhabditis elegans with Alcanivorax borkumensis oil destructive bacteria in the host-microflora system”, which is aimed at development of effective methods for microbial bioremediation of the consequences of environmental disasters caused by oil spills, which is one of the most pressing scientific problems worldwide

"The use of nano-modified bacteria A. borkumenis in the bioremediation of oil pollution of the sea surface", aimed at creating an effective and environmentally safe tool for the disposal of oil pollution.

243
Education Science Competitions Student Life International Culture Sports Cooperation
Other news and announcements
The polyelectrolyte structure has a significance in biocompatibility
The importance of carbon nanotube morphology in cytotoxicity assessment
Overview of Nanoarchitectonics in Cell Biology
Scientists developed peptide-based contrast agents for darkfield microscopy
Dark-field hyperspectral microscopy for nanoparticle detection: overview and methodology
Inspiring! Russian Science Foundation (RSF) supported two grant proposals of our colleagues
Scientists investigated the cytotoxicity of fly ash with different origin
Biologists conducted a comparative toxicity analysis of clay and carbon nanomaterials
The research group has developed a biocompatible nanocomposite based on a natural mineral and gold nanoclusters
Biologists have developed the method of detection of micro- and nanoplastic in living organisms
Scientists used nanocomposite glue and modern microscopy techniques in the restoration of XVII Century's predella reliquary
A review of recent developments in brain disease therapy using inorganic nanoparticles is published
Research group has developed the method of synthesis mesoporous vaterite crystals
Researchers functionalized human cells with magnetic nanoparticles
Scientists have produced biotechnological way of oil spill remediation
Members of the Group have developed the method of formation a concentric surface based on nanoclay
The VII School-Conference of Young Scientists of the Research Centre of the RAS
4th article in this year
3rd article in this year
2nd article this year
Victory! Results of the Republic competition of young scientists in the GRANT nomination from the Academy of Sciences of the Tatarstan Republic
бУНД Б КХВМШИ ЙЮАХМЕР
гЮАШКХ ОЮПНКЭ? пЕЦХЯРПЮЖХЪ