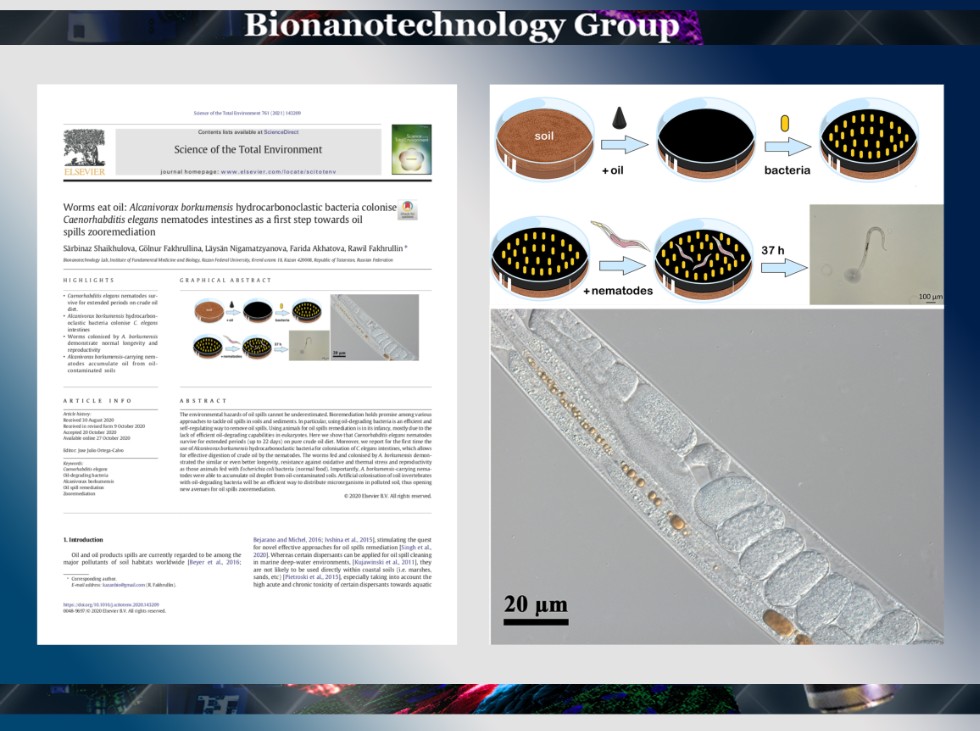 On October 27, 2020, the Science of The Total Environment published the Bionanotechnology Laboratory team's results aimed at developing a new biotechnological method of oil spill response.

The environmental hazards of oil spills cannot be underestimated. Bioremediation holds promise among various approaches to tackle oil spills in soils and sediments. In particular, using oil-degrading bacteria is an efficient and self-regulating way to remove oil spills. Using animals for oil spills remediation is in its infancy, mostly due to the lack of efficient oil-degrading capabilities in eukaryotes. It is showed that Caenorhabditis elegans nematodes survive for extended periods (up to 22 days) on a pure crude oil diet. Moreover, there was reported for the first time the use of Alcanivorax borkumensis hydrocarbonoclastic bacteria for colonisation of C. elegans intestines, which allows for effective digestion of crude oil by the nematodes. The worms fed and colonised by A. borkumensis demonstrated similar or even better longevity, resistance against oxidative and thermal stress and reproductivity as those animals fed with Escherichia coli bacteria (regular food). Notably, A. borkumensis-carrying nematodes were able to accumulate oil droplet from oil-contaminated soils. Artificial colonisation of soil invertebrates with oil-degrading bacteria will be an efficient way to distribute microorganisms in polluted soil, thus opening new avenues for oil spills zooremediation.