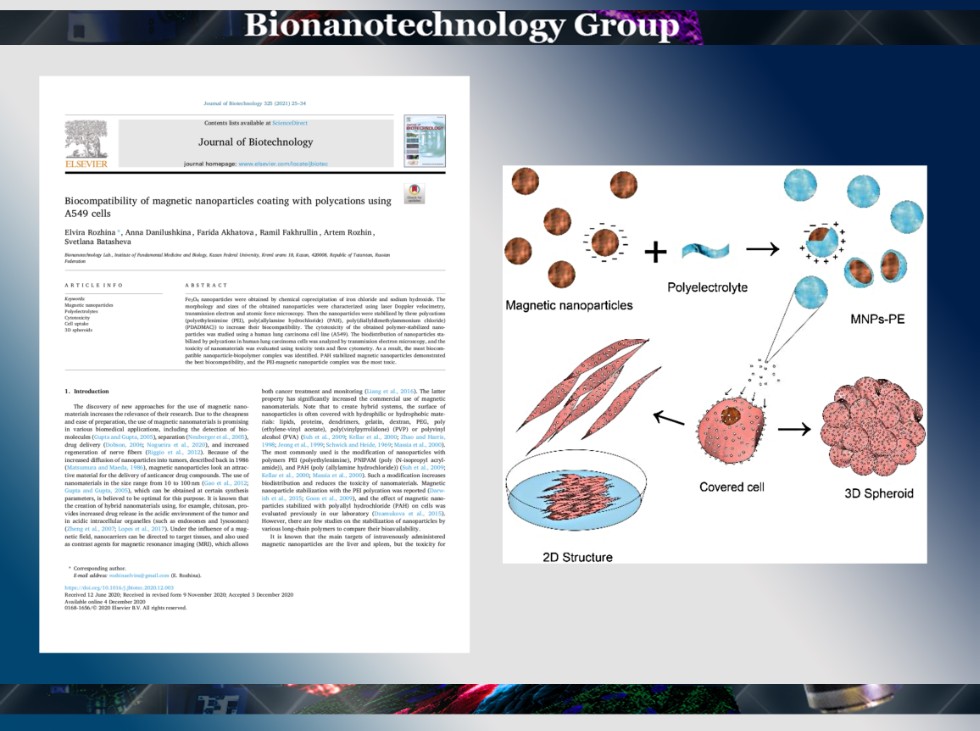 A study evaluating the effects of magnetic nanoparticle coatings on human cells' functional properties became available in the Journal of Biotechnology.

The work is aimed at determining the level of biocompatibility of magnetic nanoparticles coated with various polyelectrolytes. It is known that stabilization of the nanoparticle surface with polymers allows to enhance biodistribution and reduce the material's toxicity. In this work, the obtained nanohybrid systems were characterized by a wide range of diagnostic methods, which did not reveal any decrease in the particles' magnetic properties. The effects of magnetic nanoparticles on cells in monolayer and 3D cultures were evaluated using colorimetric and fluorescence assays. As a result, the particles coated with polyallylamine hydrochloride were the least toxic to both monolayer and 3D cultures. Polyethylamine-coated magnetic nanoparticles showed the highest level of adverse effects. It is noted that the magnetic nanoparticles were attached to the surface of the cell membrane, changing its adhesive properties. Also, their penetration into the cells had little effect on the enzymatic activity. The data obtained indicate a high potential for the application of nanohybrid based on magnetic nanoparticles and polyallylamine hydrochloride in the field of biomedicine.

Title of the article: Biocompatibility of magnetic nanoparticles coating with polycations using A549 cells

231
Education Science Competitions Student Life International Culture Sports Cooperation
Other news and announcements
The polyelectrolyte structure has a significance in biocompatibility
The importance of carbon nanotube morphology in cytotoxicity assessment
Overview of Nanoarchitectonics in Cell Biology
Scientists developed peptide-based contrast agents for darkfield microscopy
Dark-field hyperspectral microscopy for nanoparticle detection: overview and methodology
Inspiring! Russian Science Foundation (RSF) supported two grant proposals of our colleagues
Scientists investigated the cytotoxicity of fly ash with different origin
Biologists conducted a comparative toxicity analysis of clay and carbon nanomaterials
The research group has developed a biocompatible nanocomposite based on a natural mineral and gold nanoclusters
Biologists have developed the method of detection of micro- and nanoplastic in living organisms
Scientists used nanocomposite glue and modern microscopy techniques in the restoration of XVII Century's predella reliquary
A review of recent developments in brain disease therapy using inorganic nanoparticles is published
Research group has developed the method of synthesis mesoporous vaterite crystals
Scientists have produced biotechnological way of oil spill remediation
Members of the Group have developed the method of formation a concentric surface based on nanoclay
The VII School-Conference of Young Scientists of the Research Centre of the RAS
4th article in this year
3rd article in this year
2nd article this year
Victory! Results of the Republic competition of young scientists in the GRANT nomination from the Academy of Sciences of the Tatarstan Republic
1st article in 2020
Āõīä ā ėč÷ķūé źąįčķåņ
Ēąįūėč ļąšīėü? Šåćčńņšąöč˙