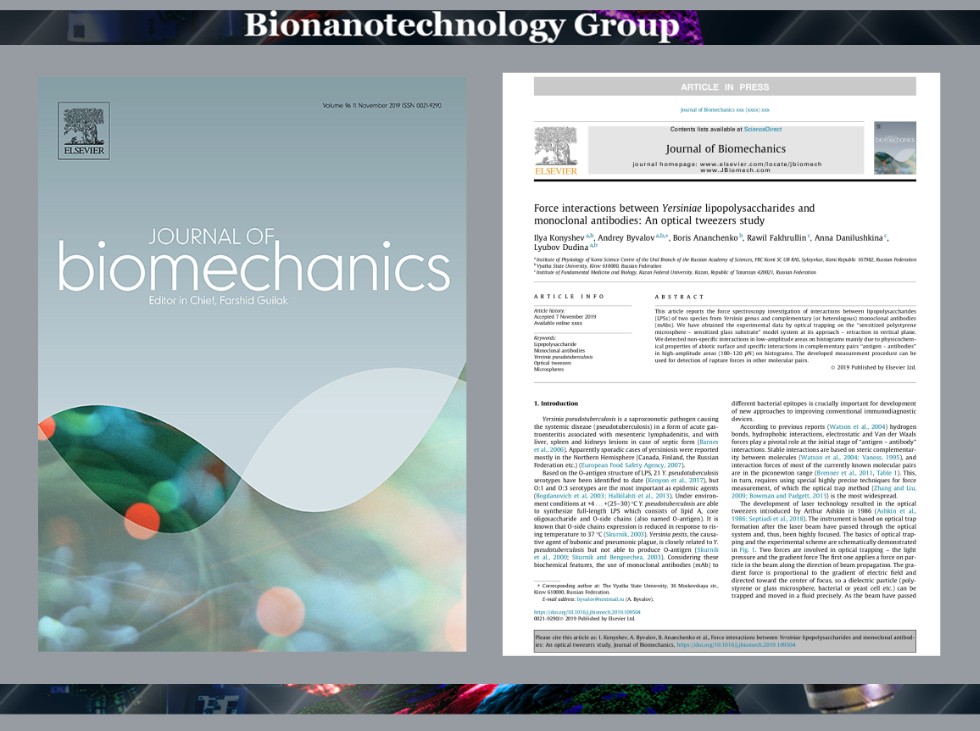 Scientists from Kirov, in collaboration with colleagues from Kazan and Syktyvkar, in a joint article report a force spectroscopic study of the interactions between the lipopolysaccharides of two species of the Yersinia and complementary (or heterologous) monoclonal antibodies. The experimental data were obtained using the optical tweezers method.

As a model system, a “sensitized polystyrene microsphere - a substrate of sensitized glass” was used. The histograms revealed nonspecific interactions in areas with low amplitude, mainly due to the physicochemical properties of the abiotic surface and specific interactions in complementary pairs of “antigen-antibodies” in areas with high amplitude (100-120 pN). The results of the study can be used to detect rupture forces in other molecular pairs. The ability to determine the intermolecular strength between Yersinia lipopolysaccharides and complementary monoclonal antibodies can be an effective approach for assessing the relative affinity of monoclonal antibodies, which is necessary to select one type or another of antibodies to develop a test system or immunosensors. On the other hand, the application of these methodological approaches can be useful for understanding the interaction between lipopolysaccharides and complementary monoclonal antibodies, as well as for elucidating the general mechanisms of immunity and pathogenesis of yersiniosis infections.

180
Education Science Competitions Student Life International Culture Sports Cooperation
Other news and announcements
The polyelectrolyte structure has a significance in biocompatibility
The importance of carbon nanotube morphology in cytotoxicity assessment
Overview of Nanoarchitectonics in Cell Biology
Scientists developed peptide-based contrast agents for darkfield microscopy
Dark-field hyperspectral microscopy for nanoparticle detection: overview and methodology
Inspiring! Russian Science Foundation (RSF) supported two grant proposals of our colleagues
Scientists investigated the cytotoxicity of fly ash with different origin
Biologists conducted a comparative toxicity analysis of clay and carbon nanomaterials
The research group has developed a biocompatible nanocomposite based on a natural mineral and gold nanoclusters
Biologists have developed the method of detection of micro- and nanoplastic in living organisms
Scientists used nanocomposite glue and modern microscopy techniques in the restoration of XVII Century's predella reliquary
A review of recent developments in brain disease therapy using inorganic nanoparticles is published
Research group has developed the method of synthesis mesoporous vaterite crystals
Researchers functionalized human cells with magnetic nanoparticles
Scientists have produced biotechnological way of oil spill remediation
Members of the Group have developed the method of formation a concentric surface based on nanoclay
The VII School-Conference of Young Scientists of the Research Centre of the RAS
4th article in this year
3rd article in this year
2nd article this year
Victory! Results of the Republic competition of young scientists in the GRANT nomination from the Academy of Sciences of the Tatarstan Republic
Āõīä ā ėč÷ķūé źąįčķåņ
Ēąįūėč ļąšīėü? Šåćčńņšąöč˙