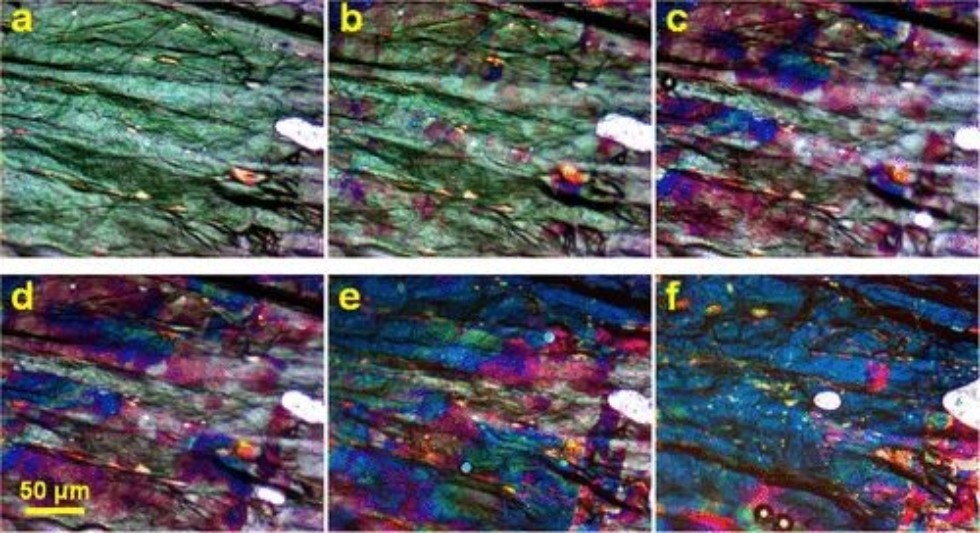 Figure 1. Optical micrographs showing transition of stage-2 GIC to stage-1 HOPG GIC. Reflected light. The stage-2 areas are greenish-white. The stage-1 areas are blue. The red-colored areas are the mixed stage. Note, the greenish tint of graphite surface on panels (a,b) is the artifact of the digital processing; the actual color is almost white. The white shapeless feature on the right of the micrographs is an air bubble. Acquired with the SPI-3 HOPG sample.

A joint Russian-American paper appeared in The Journal of Physical Chemistry C.

The beginning of this project dates back to 2012-2013, when team leader Ayrat Dimiev was working at Rice University, Houston, TX, USA, with Professor James Tour. Together with Natnael Behabtu, at that time a PhD student of Professor Matteo Pasquali, they discovered a phenomenon that could be observed in optical microscope during the stage transitions in graphite intercalation compounds. It took Dr. Dimiev six years of further research, including additional experiments at Kazan Federal University, to fully comprehend the driving forces behind the observed phenomena. The experiments were conducted with participation from PhD graduate Ksenia Shukhina. An important breakthrough came from the use of a new unique equipment, manufactured by the Belarusian company SOL Instruments, that allowed ultrafast Raman mapping of the graphite surface during the stage transitions.

Graphite intercalation compounds (GICs) are formed by insertion of certain atomic and molecular species between the graphene layers of graphite. The resulting compounds possess a range of unique properties, which are not specific for the parent materials. Among the most intriguing properties of GIC is its superconductivity, a discovery that triggered much interest. Depending on the electrochemical potential of the intercalant, and the respective charge on the graphene layers, graphite forms structures where one, two or more graphene layers are sandwiched between the two layers of intercalant. The resulting compounds are referred to as stage-1, stage-2, and stage-3 GICs, respectively. Despite intensive and long-lasting research on GICs, the mechanism of the stage transitions remains obscure.

In this study, authors used optical and Raman microscopy to perform direct real time monitoring of stage transitions in H2SO4-GIC made from highly oriented pyrolytic graphite (HOPG). They observed that stage transitions in HOPG-based GIC occur very differently from those in GIC made from the natural flake graphite. During the stage-2 to stage-1 transition, formation of the stage-2 phase begins nearly simultaneously over the entire graphite surface that is exposed to the media. This was attributed to the movement of the small intercalant portions toward the points of attraction, thus growing continuous islands. However, during the reverse process, the stage-1 to stage-2 transition begins strictly from the edges of the graphite sample and propagates toward its center. The most striking observation was that the deintercalation front was discontinuous; namely, the selected micrometer-sized domains of the graphite surface deintercalate preferentially to release the strain that had been induced by the intercalation. The intercalant dynamics in the 2D graphite galleries, occurring at the speed of >240 ?m/s, has fast kinetics. The initial intercalation process is different from the rest of the reintercalation cycles.  The difference in the mechanisms of the stage transitions in natural flake graphite-based GICs and in the HOPG-based GICs exemplifies the role of the graphite structure for the intercalant dynamics in 2D graphite galleries.

The findings made in this study advance the field of graphene and have several potential applications. GICs can be considered as stacks of doped graphene which can be easily prepared by fully reversible reactions; the doping level can be easily controlled by the reaction conditions. Secondly, intercalation weakens the adhesive forces between the adjacent graphene layers, thus, GICs serve as precursors for obtaining single-layer graphene and graphene nanoplatelets via liquid phase exfoliation. Third, GICs serve as important and unavoidable intermediates en route to covalent functionalization of graphene due to the charged condition of carbon atoms. Finally and most importantly, Li-ion battery operation is based on the cyclic intercalation-deintercalation of lithium ions with graphite. Understanding the stage transition mechanism will help in advancing all these applications.

Ayrat Dimiev concludes, “The studied stage transitions in the H2SO4-GICs are accompanied by the transfer of protons to and from the intercalated sulfuric acid that occurs by the Grotthuss mechanism, i.e. it is ultrafast and “frictionless”. We are thinking of checking if that is true. If yes, these systems can be used as proton conductors in the hydrogen fuel cells. Another direction is developing an efficient and high-throughput procedure for the liquid phase exfoliation of graphite to mono-layer graphene.”

Stage Transitions in Graphite Intercalation Compounds: Role of the