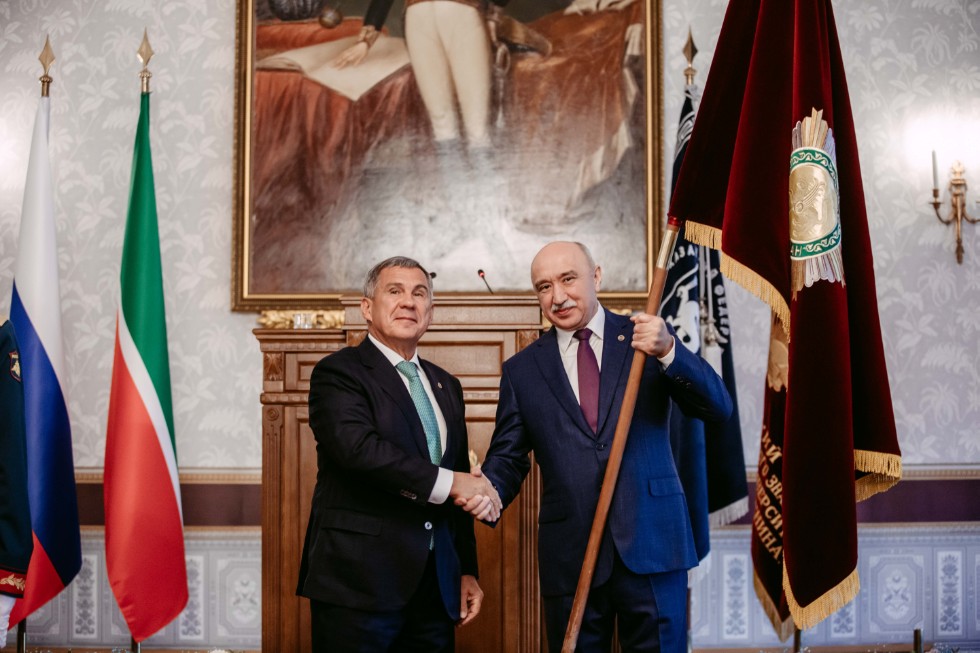 The honor was bestowed on 27th November by President of Tatarstan Rustam Minnikhanov.

The award ceremony was held in the form of a special meeting of the Board of Academics. International partners, local dignitaries, and KFU employees were invited to attend.

In his congratulatory speech, President Minnikhanov noted, “One cannot imagine the history of Kazan and our Republic without its main educational and research institution. The University hasn’t stopped working for a minute, even during the October Revolution and the Second World War. I want to say special thanks to the employees. New generations come to research at the University, and this is possible thanks to the support given by the federal authorities and President Vladimir Putin. Our duty is to preserve the traditions laid by previous generations.”

After that, the medal of a Distinguished Worker of Science of the Republic of Tatarstan was given to Rector Ilshat Gafurov, and others awards were bestowed on some of the University’s employees.

“Many thanks for the kind words spoken to our university, for the awards we received today. I would like to say separate words of gratitude to you, Rustam Nurgalievich, for the fact that you have marked the entire staff of the Kazan Federal University with the highest award of the Republic, the Order of Merit. This is especially important for us, since the University, during the length of its existence, has always been closely connected with the life of the native land and native country. The university has been repeatedly marked by high state awards, having received the Order of the Red Banner of Labor in 1954, and the Order of Lenin, the highest award of the Soviet Union, in 1979. And today we are marked with the highest award of our Republic. This obliges us to a lot, and on behalf of the many thousands of employees of Kazan Federal University, I want to assure you that we are always ready to solve the most important tasks for the benefit of Tatarstan and our great country,” replied Dr. Gafurov.

Kind wishes were also extended by Academician, Director of the Institute of Legislation and Comparative Law under the Government of Russia, Kazan University alumna Taliya Khabrieva.

Ôîňîăđŕôč˙ čç ěŕňĺđčŕëŕ: Kazan Federal University awarded with the Order 'For the Merit to the Republic of Tatarstan'