The High school ITIS KFU on the first place in the Russian Federation on direction 'Applied Informatics'
Main page \ Academic Units \ Physics, Mathematics and IT \ Institute of Information Technology and Intelligent Systems 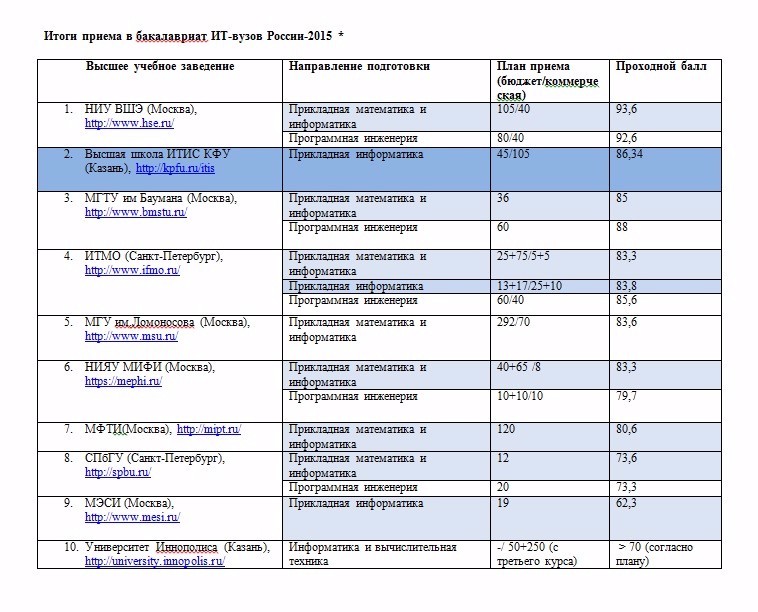 As a result of the admission campaign 2015, Graduate School of ITIS KFU improve reception and got the first position among the IT universities in direction "Applied Computer Science".

Higher school ITIS - Innovation  department of KFU, wich specialized in training in the field of "Applied Informatics" and promotes grant approach - "learning by practicing the job of industrial production."

The results of the admission campaign 2015 Graduate School of ITIS KFU (see. Table) are comparable with leading IT universities in Russia, and in some cases exceed them. The leader was the NRU "Higher School of Economics", which successfully operates Faculty of Computer Science, created together with Yandex (see. Table "Results for Applicants IT universities in Russia").

So, the Graduate School of ITIS KFU became the second of the most popular institutions in the country among students with high exam scores and the first - in "Applied Computer Science".

* Figures are based on open source universities in the country in the direction of "Applied Informatics" (August 19, 2015)