#ITISPROM2015 - We did it!
Main page \ Academic Units \ Physics, Mathematics and IT \ Institute of Information Technology and Intelligent Systems 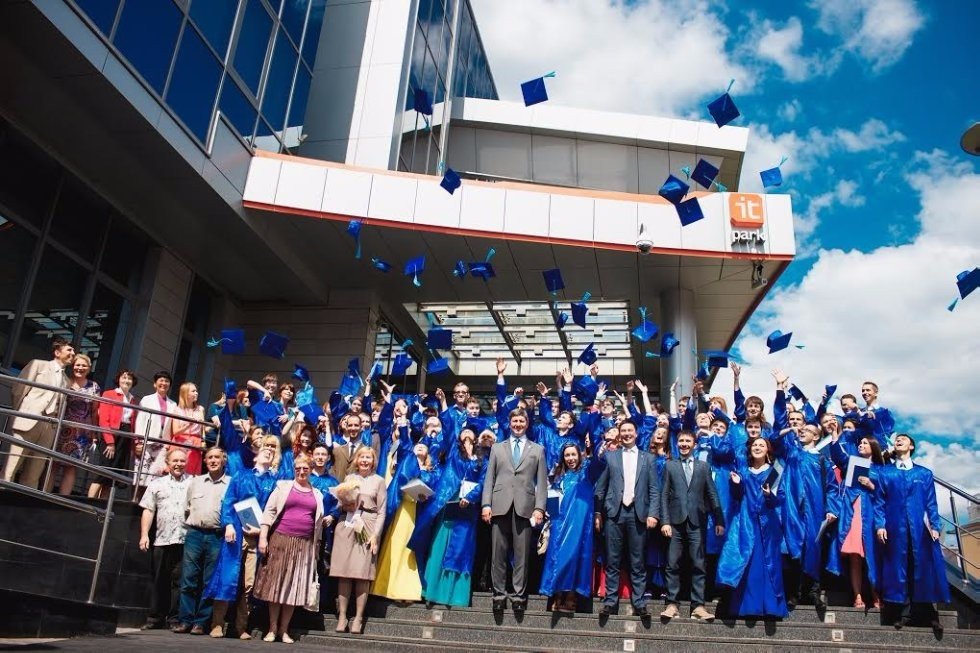 In 2 July 2015 year in Technopark It-Park  was  presentation of diplomas to the first graduates of the Higher School ITIS KFU
ITIS KFU this is an IT-faculty which was founded in 2011 in common with the Ministry of Information and Communication of the Republic of Tatarstan, with Kazan Federal University, with global brands like IBM, Microsoft, HP, Oracle, representatives of the largest IT-companies in the region.
4 years ago, in September 1, 2011 Graduate School of Information Technology and Information Systems took the first listeners. The first students - that's 38 boys and girls who began to study in  direction "Applied Informatics". 30 of them - the ones who showed the best results of the exam on computer science, mathematics and russian language - have received grants to study from the Technopark “IT-park”. It has been allocated 30 personal grants for applicants for the total amount of 2.2 mln. rubles.
In 2015, they became the first graduates of innovative IT-faculty of Kazan Federal University. Opened the ceremony the director of the Graduate School of ITIS KFU Ayrat Faridovich Hasyanov. In his opening speech, he shared that he was very hard to part with their first students. But for their future he is calm, now they are ready for the application of their knowledge. "Students will be able to turn ITIS Tatarstan in the Russian Silicon Valley" - sure Ayrat Hasyanov.
Already it received more than 600 applications for the new school year. We offer about 20 industrial laboratories in various branches of the IT-industry, practice and work in the best IT-companies.
On this historic day history faculty remembered very often. In his video message of congratulations, Minister of Communications and Mass Media Nikolai Nikiforov said: "I remember four years ago, I had to persuade your parents that they took a chance and let you go to ITIS, they had a lot of questions then." Now all of them have disappeared in the hall happy graduates, most of whom are already in the profession.
The guest of outlet evening became Deputy Prime Minister - Minister of Communications and Mass Communications of the Republic of Tatarstan Roman Aleksandrovich Shaikhutdinov. He thanked the team of the University for the work they are doing, in order to realize the potential of the country.
"You are the first harbingers of this faculty. This is very important and in demand for the country. You are the people who will determine the future of a number of sectors of the economy. "- Stressed the Minister.
Determining in this sense is a practical approach to learning noticed projector Kazan Federal University Riyaz Gataullovich Minzaripov. The question the lack of experience for students of the Graduate School of ITIS is not relevant. "Your training has also attended by representatives of IT-companies, which means you prepared professionals", - he said to the graduates.
Director of Technopark «IT-park" Anton Grachev, in turn, expressed the hope that many of the guys try themselves in business. "If you have a desire and the idea the doors of our business incubator is always open for you," - said Anton Grachev.
Congratulated former students and teachers, they met with a standing ovation and standing. Some of them are already cooperating successfully.
When all the diplomas were in the hands of graduates, including 7 degrees with honors, guests will receive an gifts. Unusual graduation albums, with QR-codes instead of photos. This is admitted, director of the IT-park Anton Grachev, he had never ever seen.
The grand conclusion of the graduation ceremony of the first graduates of the Higher School of ITIS KFU became general photo with shoots up caps and cheers, "We did it!"

Фотография из материала: #ITISPROM2015 - We did it!