The plenary session “The Face of the Modern City: Eco-Friendly, Intelligent, Sustainable” was made by guests and experts in the climate change, among them the most interesting presentations were made by  Giuseppina MONTANARI, Deputy Mayor of Rome for Sustainable Environment, Rome Municipality (Italy ); Jana DAVIDOVA, Head of the Deadline 2020 Project, C40 group of cities on climate leadership (United Kingdom); Igor ČIZMEK,  Minister Assistant for Climate, Sustainable Development and Air and Soil Protection, Ministry of Ecological Energy (Croatia); Stefan NYSTROM, Head of Climate, Swedish Environmental Protection Agency (Sweden); Anne GIROULT, Executive Director of the Paris Climate Agency (France). The central problem of the discussions was energy and transport in megacities. The European and Scandinavian experience has shown that in cities, the most powerful combination is often used to solve the problem of climate change: on the way to zero emissions: introducing new technological capacities for renewable energy sources and creating effective social policies. Regarding social policy, a number of questions can be considered: how is social policy understood in each specific state and how it is implemented taking into account the balance of institutions power, business and government in the specific geopolitical context. Coordination of interests and the use of political tools related to each state was the main problem point that should be resolved first by the decision makers. In other words, we need to understand - Who, with whom, how?

One of the final reports was presented by Igor Alekseevich Bashmakov, General Director of the Center for Energy Efficiency - XXI Century. The expert reminds that in spite of the fact that certain success can be observed in the megacities economy, Russia as a whole remains at the very last places in the countries' energy intensity rating.

Kulbachevsky A., the head of the environmental management department of Moscow, finds the solution to the problem in reducing emissions and creating a new energy policy through modifying the metropolitan transport system. Specific indicators are given: 60 new metro stations in Moscow, a transport ring, new energy-efficient versions of public transport (trolley buses, electric trains, trams) have already appeared in the megalopolis; low potential heat in providing energy to the metro (for example, the station Salaryevo). Together with the introduction and replacement of new energy-saving installations and modernization of power plants - this will allow to reduce emissions by 30 percent in future; the purchase of equipment through the tool of green government orders should also implemented in such case. Interestingly, the use of green energy sources will still be considered in Moscow, although according to the official report of state structures they were reported inefficient for large-scale use in the city, most likely it will be a waste incineration plant, the use of low-grade heat. 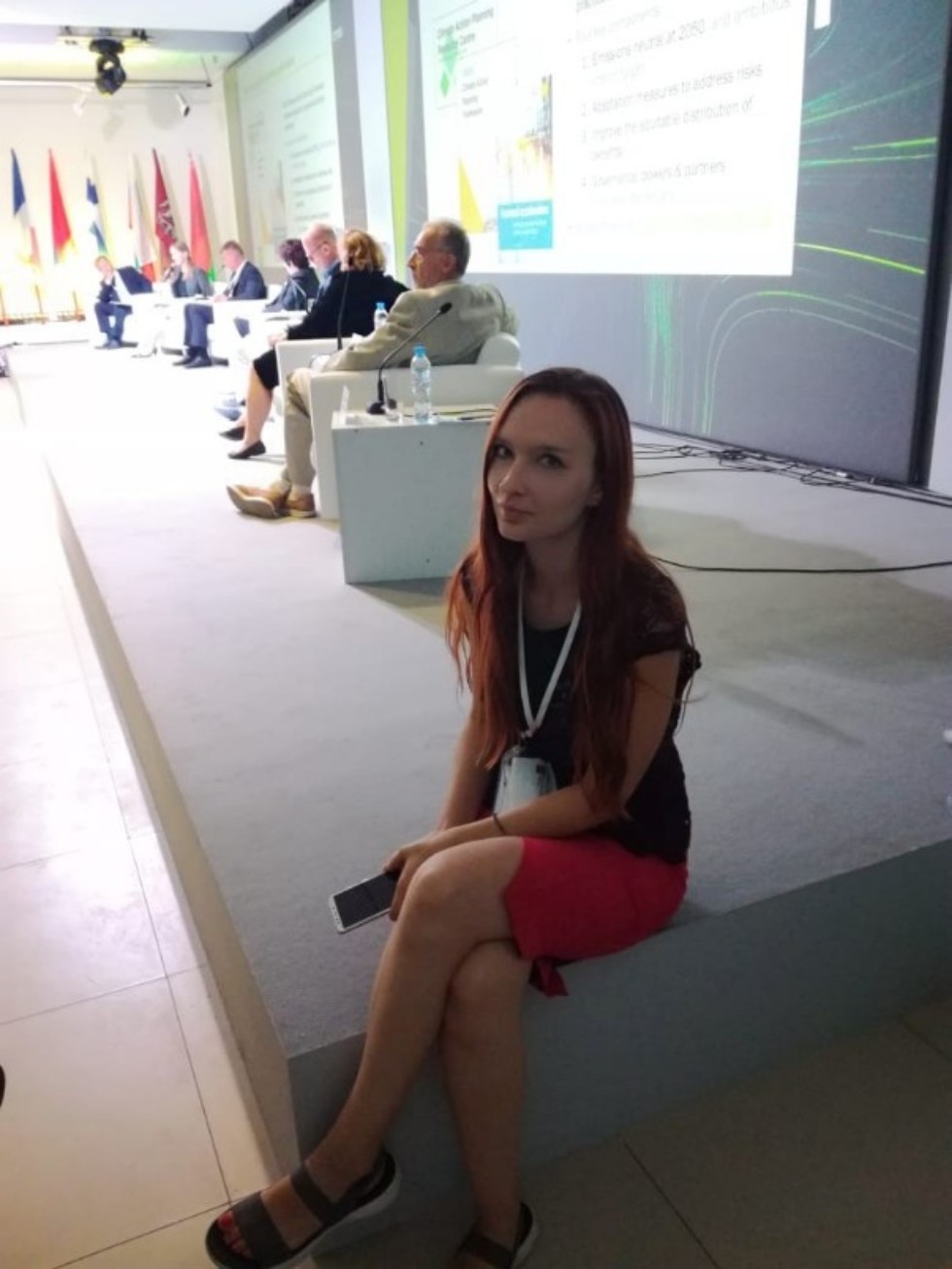 The 3rd Panel Session “Green City Index: a climate navigator for cities” which was organized by the group of the German Climate Technology Initiative (DKTI) program and the International Climate Protection Initiative (IKI) (GIZ) program might be seen extremely useful for the Russian experience. The implementation of indices will remain an applied task for the evaluation of urban spaces; it is not the methodologies that are important, but what conclusions problems might be resolved with the help of these indices. Martin GITZELS, the Head of Corporate Research and Technology Department, Vice President of Siemens LLC, Moscow / St. Petersburg, Russia, introduced the index developed by Siemens Greencity Index 2.0. It is a set of tools for stabilizing urban infrastructure, primarily taking into account the environmental and economic issues: how quickly should we build a new city infrastructure to prevent climate change and the influence of environmentally unfriendly factors.

The vision and development of the business sector in building green indices is remarkable for a social policy researcher as a vision of the urban infrastructure future, especially for businesses developing system technical solutions that adhere to the CSR program for sustainable development and produce equipment (Wind Power, Hydropower, Power Plants, biomass and products for Siemens solar energy) as direct process stakeholders, whose opinion must be taken into account. Reinhard ALBERT, German Environmental Protection Agency, an expert of the Russian-German project “Climatically Friendly Economic Activities: Implementing BAT in Russia” (Germany) shared his experience of creating BAT in Germany, showing specific examples of which formulations can be useful for Russia. Evgeniy G. GASHO, the Head of the Energy Conservation Laboratory of the National Research University “Moscow Energy Institute”, Chairman of the Ecology Energy and Sustainable Development Commission of the Public Chamber of Moscow pointed out that cities should not be the main goal of implementing climate change mitigation policies specifically in Russia, they occupy 0, 01% of the total area of the state, you need not to forget about remote cities, settlements and infrastructures that require economic and technical modernization and possible uses of decentralized energy. Moreover, there are such important indice that need to take into account as the vulnerability of the city, which was pointed out by Elena Ivanovna Dolgikh, General Director of SGM, Ph.D. She reported about the comparison of various green indices that different agencies use, their capabilities and limitations. Academics and business are setting the goal of aligning their both interests in building a joint model, where our common tools will be implemented, therefore such experience should be as open as possible to the wider community.

In this discussion took part the following speakers: Alexander Aleksandrovich CHULOK, Deputy Director of the Foresight Center at the Institute of Statistical Studies and Economics of Knowledge, National Research University Higher School of Economics, Associate Professor, Ph.D., Vladimir M. KATTSOV, Director of the Main Geophysical Observatory named after Voeikov (GGO) of Roshydromet, St. Petersburg, PhD in Physics and Mathematics, Robert Iskanderovich NIGMATULIN, Scientific Director of the Institute of Geography and RAS, Professor of the Skolkovo Institute of Science and Technology, Academician of the Russian Academy of Sciences, Professor, PhD in Physics and Mathematics, Vadim Ivanovich SHAROV, Head of the International Department of the “Technologies for Ecological Development” Technology Platform, National Contact Point “Environment, including Climate Change”, Ph.D., Boris Georgievich SHERSTYUKOV, Head of the  Laboratory for the Research of consequences of climate change-Russian Research Institute of Hydrometeorological Information - World Data Center (WDC RIHMI), D.Sc.

Experts are still repeating that climate change is something that is real, and is confirmed by long-term observations by different organizations that study climate problems. A phenomenally warm summer was recorded in Europe and for example, “Russia is getting warmer faster than the whole Earth” (Vladimir Mikhailovich KATTSOV). Therefore, all the problems (warming, cooling, sudden change of weather) are understandable, in this case technologies for adapting to climate change should be implemented more quickly in Russia. The following trends will be relevant for researchers in the future:

-The physical basics of the climate change

-The impact of climate change on society and its real vulnerability

IUWESC - urban service in the environment and climate also mentions that there will be relevant systems for early warning of climate change, production of climate-neutral products, informing citizens, forecasting impacts and warning consequences.

Other news and announcements
Moscow Annual Climate Forum: the notes of the forum participant
International Moscow Urban Forum 2019: a reflection on the cities of the future
Summer School on Network Analysis
Consent and Critics: A Brief Review of the St. Lockie's article entitled the 'Sustainability and the Future of Environmental Sociology'. Environmental Sociology, 2016, 2:1: 1-4.
Participatory modeling as a way of involving stakeholders in the formation of social policy: a point of view within the process
Polina Ermolaeva participated in the XIX ISA World Congress of Sociology (Toronto, July 15-21, 2018)
GARBAGE AS A DESIGN OF GLOBAL SOCIAL REALITY
Āõīä ā ėč÷ķūé źąįčķåņ
Ēąįūėč ļąšīėü? Šåćčńņšąöč˙