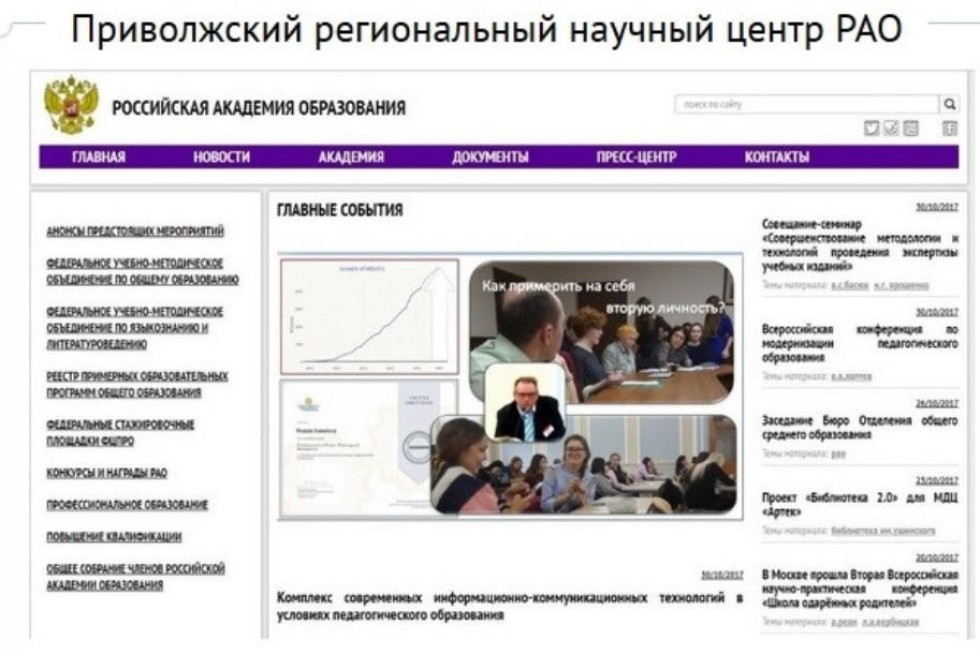 Two years ago, at a meeting of the heads of regional scientific centers of the Russian Academy of Education, held on October 24 in Moscow, the representative of Kazan Federal University was awarded a certificate on the establishment of the Volga Scientific Regional Center of the Russian Academy of Education on the basis of Kazan Federal University.

Over the past two years, the regional scientific center of RAO has done a great job. Aidar Kalimullin, Doctor of Historical Sciences, Professor, Director of the Institute of Psychology and Education of Kazan Federal University, spoke about the main scientific directions and results of activities.

- The regional scientific center of the Russian Academy of Education in the Volga Federal District has been operating on the basis of Kazan Federal University for the third year. Its creation was a logical result of the work of scientists of the Institute of Psychology and Education of Kazan Federal University and the Russian Academy of Education in the framework of a joint research laboratory on the problem of "Organizationally-substantive and technological updating of the educational process in a modern Russian university", created in 2014 due to the increased interest of the scientific and pedagogical community in modernization processes in KFU.

The interaction of NRC with RAO is aimed at scientific support of the processes of self-development and self-organization of educational organizations - participants of network interaction.

Under the conditions of the scientific and educational network, these processes were based on functional and system-activity approaches that ensure a rational distribution of tasks between the participants in the interaction.

Aidar Kalimullin specified that the mission of the RAO scientific center in the Volga region is multifaceted: it is a study of models of teacher training in a university complex, and testing technologies and mechanisms for teacher training in the conditions of transformation and digitalization of education, as well as developing psychological, pedagogical and methodological foundations for the implementation of pedagogical education.

In order to solve the problem of increasing the professional competence of a future teacher in innovative activities, as well as developing professionally important qualities and personality traits of a teacher, the Center is actively working.

The co-director of the center recalled the main events held this year.

In general, the scientific, educational, and creative laboratories of theatrical pedagogy created by KFU scientists are a creative union of professional, amateur, and children's theaters. Today, 186 such laboratories operate in basic educational institutions of KFU, partner schools, and experimental sites of IPO KFU. Together with their parents, children of different ages touch theatrical art in them.

The priority areas of research at the Volga Scientific and Educational Center of the Russian Academy of Education are strategic guidelines for the development of national education and the methodology for their implementation.

A distinctive feature of the research of REC RAO is the "practical methodology of pedagogical research."

So during the work of numerous scientific and practical conferences held this year in KFU, including the VIII Republican Scientific Research Conference named after Boris Butome, scientists tried to develop a concept, program, technology for identifying and supporting gifted children.

- Faced with the problems of studying, diagnosing and developing giftedness in the modern sociocultural space, with hostility towards the mass school from the leadership and the public, with problems of discrepancies between physical, intellectual and social development, with a feeling of dissatisfaction, it is necessary to take into account the psychological characteristics of the younger generation, playing interests preschoolers, schoolchildren and students, the ratio of giftedness and deviation, the need for attention of adults, it is necessary to consider problems in the language development of students, problems in training and creative self-realization in their own language,

Keywords: The co-head of the Volga Regional Scientific Center of the Russian Academy of Education summed up the results of two years of work