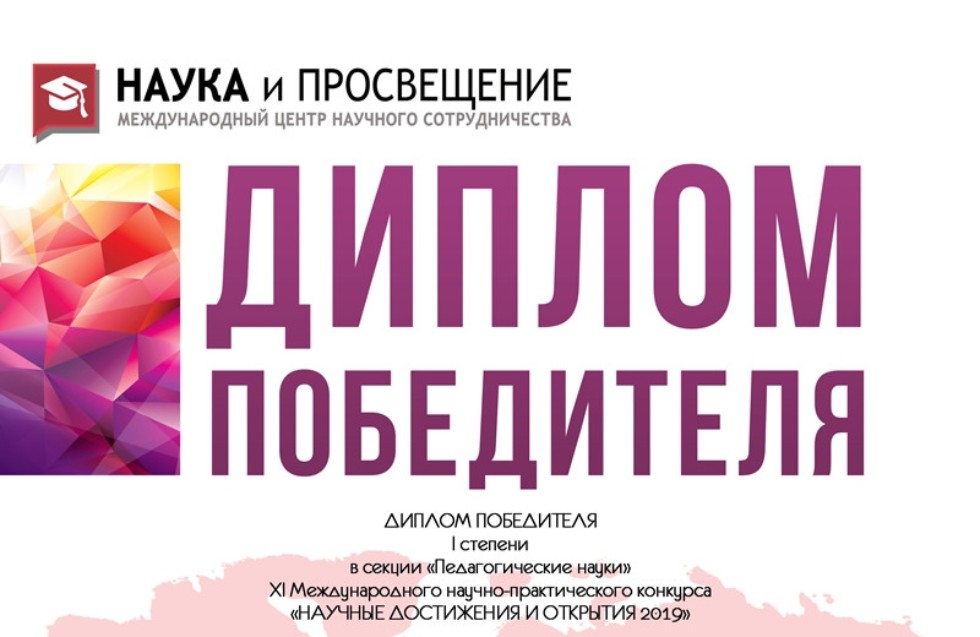 The International Center for Scientific Cooperation "Science and Education" summed up the XI International scientific and practical competition "Scientific Achievements and Discoveries 2019". Among the winners are representatives of Kazan Federal University.

The aim of the competition, which has already been held for the 11th time, is to promote the integration of Russian science into the global scientific information space, the dissemination of scientific knowledge, and the support of high standards of publications.

Doctors and candidates of sciences, graduate students and applicants for scientific degrees, scientists and specialists in various fields, teachers and students become participants in the competition.

The scientific work of the scientists of the Institute of Psychology and Education of Kazan Federal University Lera Kamalova and Venera Zakirova, “Language Adaptation of Migrant Children”, presented at the competition, was recognized as the best in the section “Pedagogical Sciences” and awarded with a diploma of I degree.

“The article was the result of our study, the theme of which was the problem of the language adaptation of children of migrants from neighboring countries,” explained co-author of the article Lera Akhtyamovna. - We tried to justify the creation of conditions for the language adaptation of migrant children in elementary school, to develop an integrative methodology for teaching the Russian language of Muslim children of migrants and to experimentally test the effectiveness of training according to the developed system.

The experiment took place in schools with an ethno-cultural Tatar component in three stages.

- At the first stage, experimental sites were created on the basis of the above secondary schools, the process of language adaptation of migrant children and the teaching of the Russian language to students in grades 1-4 were monitored. At the second stage, the theoretical concept of the study was clarified and corrected, a mass educational experiment was conducted in primary schools. At the third stage, analysis, synthesis and systematization of the data obtained and testing of the research topic in publications and speeches at scientific conferences were carried out.

Scientists noted in their article that the methodology they developed for integrative teaching of the Russian language contributes to the quick language adaptation of a migrant child to a foreign language environment and entry into the culture and socio-cultural space of the host country.

The article by scientists at Kazan University will be included in the collection of the best articles of the XI International Scientific and Practical Competition "Scientific Achievements and Discoveries 2019", which will be registered in the Elibrary and which will be awarded the UDC, LBC, ISBN. The publication is intended for researchers, teachers, graduate students, undergraduates, students for the purpose of use in scientific work and educational activities.

Keywords: Scientists at KFU awarded the winner's diploma for the best scientific article