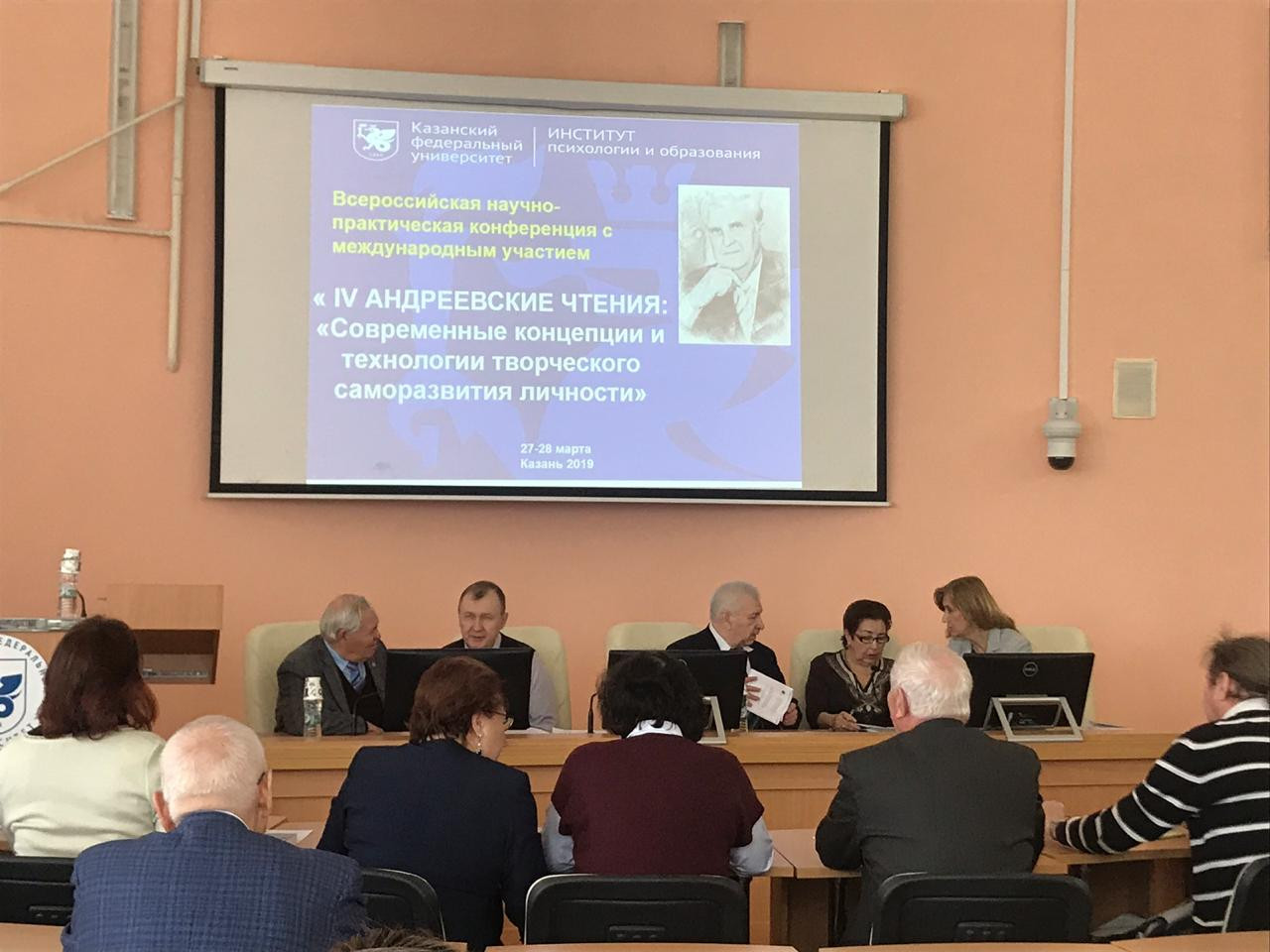 In Kazan, on the site of the KFU Institute of Psychology and Education, the IV scientific-practical conference with international participation "IV St. Andrew's Readings: Modern Concepts and Technologies of Creative Personality Self-Development" took place. personality and pedagogy, which work today the best universities of the country, Valentina Andreeva.

Valentin Andreev, Professor of KFU, Academician of the Russian Academy of Education, Honored Scientist of the Russian Federation, is still considered the ideological inspirer of the scientific-practical conference with international participation. His scientific school of pedagogy of creative development and self-development is known not only in Russia, but also abroad. His students today, when the professor is no more, continue the work of the “teacher”.

Today, more than 60 specialists have become participants in the forum: scientists, teachers, psychologists, linguists, journalists, political scientists and lawyers, students and colleagues of the scientist who continue to develop the ideas of his scientific school "Pedagogy of creative self-development of a competitive personality." The conference was solemnly opened by the director of the Institute of Psychology and Education of the KFU, Professor Aidar Kalimullin:

"It is through creativity and a creative approach to building a lesson plan, for example, that a teacher can be interested in his subject, teach him to think and reason, learn to learn".

Among the guests of the forum are Academician of the Russian Academy of Education, ex-vice-president of the Chuvash Republic, Honored Scientist of the Russian Federation, Chairman of the Assembly of Representatives of Peoples Residing in the Chuvash Republic, Professor Lev Panteleimonovich Kurakov, President of the International Humanitarian Academy "Europe-Asia", Rector of the World Culture Institute UNESCO, UPF World Ambassador, Professor Engel Rizakovich Tagirov, Deputy Director for Research of the Institute for Educational Development Strategy of the Russian Academy of Education, Professor Vladislav Vladislavovich Serikov.

n his welcome video address, Doctor of Pedagogical Sciences, Honored Scientist of the Russian Federation V.Serikov spoke about the importance of the creative self-development of the individual. - For many years we have had a warm relationship with Andreev. And his theory and today is used in the preparation of the modern teacher. The professional sphere itself, in which the teacher lives and works, involves continuous movement forward. The need for self-development is claimed by the very nature of the profession of a teacher. As the ancients said: "first learn, and then learn." Therefore, modern pedagogical science should provide the teacher with such conditions so that the teacher can use all the best that science has accumulated.

In a welcoming speech, Academician of the Russian Academy of Education, President of the Open International University “Dialogue of Civilizations”, Professor Suhail Farah (Lebanon, Beirut) noted that today the subject of creative self-development of the individual is undoubtedly relevant.   The idea of ​​holding a scientific conference devoted to the psychology and aspects of creative activity in pedagogy arose several years ago at the Institute of Psychology and Education of the KFU. And the Department of Pedagogy of the Higher School of IPO KFU continues the tradition begun by some great scholars.

Education today is focused on training a new person: a person who is creative, competitive. And Valentin Ivanovich was at the forefront of these ideas. At the time of their appearance, they seemed controversial and provocative to the majority of the scientific community. Today, these ideas are more relevant than ever in the light of the focus of our education on the preparation of a new modern personality. Therefore, everything that will be discussed today, all the ideas that will be presented, are of interest to the pedagogical community, ”explained Inna Golovanova, Associate Professor of the Department of Pedagogy of the Higher School of IPO KFU.

The conference is theoretical: the nature of reflection. Therefore, the theoretical part presented in the plenary part of the conference is so important. - The topics of the reports of the plenary session were quite extensive and diverse, but the unifying of all the presented works was the fact that their designs used a creative approach. The priority issues for discussion by the participants were new perspectives of the creative self-development of the individual in the digital world, as well as the improvement of the innovative educational system, the renewal and transformation of teacher education.

Scientists from all over the country present the results of their work on the subject of the creative self-development of the individual. And the outcome of the conference will be an analysis of the experience gained and the identification of promising areas for further research, ”Inna Golovanova summarized. “Not only theoretical, but also empirical studies are conducted at our department,” continued the KFU scientist. - We introduce our ideas into practice, organizing innovative activities.

This year, for the first time at the conference, the award ceremony was held for the best research work in the field of educational innovations, which was announced a year ago by the son of Andreev, professor at the Kazan Law Institute of the Ministry of Internal Affairs of Russia Maxim Valentinovich. According to the heir, one of the undeniable merits of today's conference is the ability to evaluate the practical work of educational institutions in which the designs of Valentin Andreev were introduced. The prize for the free publication of materials of the Republican scientific-practical conference received school number 146, the concept of which, by the way, was created by academician Andreev.

On the second day of the IV scientific-practical conference with international participation "IV St. Andrew's Readings: Modern Concepts and Technologies of Creative Personality Self-Development" a methodological seminar will be held at the Stolbyshchensk Secondary School No. 2, which will be attended by school principals of Tatarstan. We will talk about the modern experience of introducing technologies of the School "Pedagogy of creative self-development" in the activities of educational institutions.