Jean Monnet Centre of Excellence "Volga International Centre of Excellence in European  Studies - VOICES+» was created in Kazan Federal University in September 2015 for a three year period to carry out interdisciplinary research and educational activities in the Republic of Tatarstan and the Volga Federal Region, with an emphasis on issues of legal support of European integration and relations between the EU, Russia and the Eurasian space in areas such as:

The project involves:
- Research, debates, round tables, scientific conferences, summer schools, examination and preparation of proposals on the draft regulations in the field of cooperation between Russia - EU - EAEC,
- The introduction of intensive courses, e-learning resources and lectures on the subject of European integration for students, undergraduates, graduate students, enrolled in the law and other humanities,
- Publication of the quarterly newspaper "Your Europe", electronic sheet Center of Excellence, a monograph on the regional dimension of integration in the EU and in the Eurasian space.

Grant budget for the three years is 100 thousand euro.

The global objective of the proposed project is to advance awareness, knowledge and understanding of the EU in the Volga Federal District of the Russian Federation by promoting education, training, research, academic links and outreach activities in the fields of EU law, EU economy, general and interdisciplinary studies on EU integration, migration and borders as well as EU-Eurasia-Russia relations.
During the last three years Kazan Federal University has been involved in the EU-sponsored project of the EU Centres “Volga International Centre in European Studies.” (VOICES). In the framework of that successful project in Kazan Federal University it was created an active research and academic EU centre.
So, the specific objective of the proposed project is to advance and reinforce the previously created sustainable platform for research, teaching, professional and public development and knowledge transfer on EU topics, as well as building links and cooperation at local, regional and international levels.

The long-term task of the proposed Centre consists in supporting a team of scholars specializing in international relations and political science, legal and cultural studies, arranged at the interdepartmental platform of the Centre of Excellence in European Studies at Kazan Federal University, which will work successfully in research and educational fields of EU-Russian-Eurasian borders studies and migration.

The certain tasks of the project are:
?    to conduce research and educational cooperation through academic networking, field research and teaching aimed at promotion of interdisciplinary approach to EU–Russian-Eurasian border, social policiy and migration policies;
?    to disseminate the results of the project through different-type discussions, targeted to multiple-aged, both to academic and non-academic audience.

Project Manager - Director of the Educational and Research Centre for Human Rights, International Law and Problems of Integration, Ph.D. in Law, Rustem Davletgildeev.
Participants - Head of the Department of International and European Law, Doctor of Law, Adel Abdullin, professor in the same department, Doctor of Law Gulnara Raifovna Shaikhutdinova, Academic director of the International Laboratory for the Comparative Urban Research, PhD, John Round, Associate Professor, PhD in Sociology, Irina Kuznetsova, Director of the Research Center of Postsocialism, PhD in Sociology, Alexandra Yatsyk. 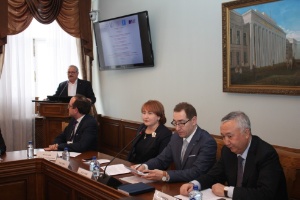