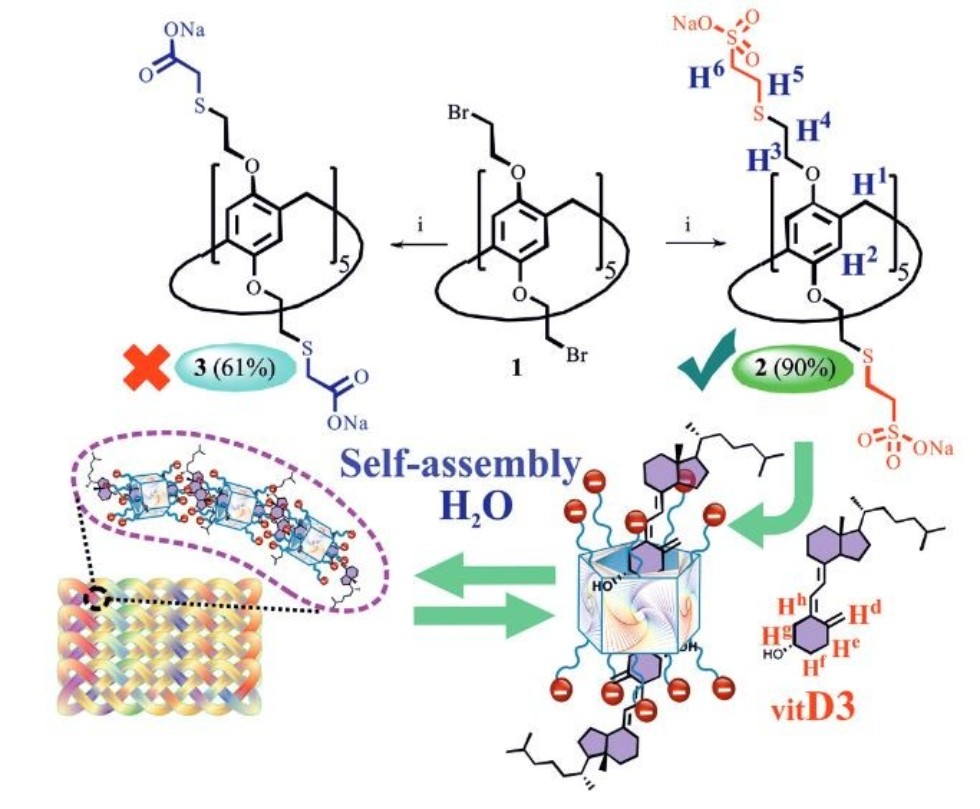 A paper by Kazan Federal University saw light in Organic and Biomolecular Chemistry.

The scientific group under the leadership of Professor Ivan Stoikov has been engaged in supramolecular chemistry research for more than 20 years and is well-known in the professional community. The main undertaking of the research group is the study of new biologically significant materials obtained on the basis of macrocyclic compounds.

In this paper, the team reported the first example of the use of water-soluble macrocyclic systems based on pillar[5]arene derivatives (para-cyclophanes) as self-assembling biomedical vitamin D3 delivery systems. A distinctive feature of this development is an order-of-magnitude increase in the final working concentration of vitamin D3 in water, which makes it possible to use the drug in a higher dosage and a smaller dose in volume. Another distinctive feature is the "smart" behavior of macrocycle/D3 particles in water. In a solution, there are stable nanosized particles (dispersion) of vitamin D3 in water, but as soon as the water evaporates, a nanoporous film (supramolecular polymer system), consisting of a macrocycle and vitamin D3, forms on the surface. Thus, the authors managed to create a highly concentrated water-soluble form of vitamin D3 due to the formation of nanosized particles obtained by encapsulating the vitamin in the cavity of the pillar[5]arene with subsequent association. Due to the ability of these particles to self-assemble in a controlled way (association), it becomes possible to choose the route of administration of vitamin D3, depending on the characteristics of the human body. A key feature of such systems is the toxicity of the components themselves. This complex work has shown that the applied macrocyclic systems based on pillar[5]arene are completely non-toxic to the human body.

Vitamins of the D group are synthesized internally by the body when exposed to sunlight. But if the production of vitamin D in the body is not sufficient, then, as a rule, supportive therapy is prescribed with the addition of dietary supplements with vitamin D to the daily diet. The problem with dietary supplements is that it is difficult to calculate the required concentration and strictly adhere to the diet. The use of “smart” supplements that can release a certain amount of vitamin in a controlled manner for a long time is an urgent task for the pharmaceutical industry and removes the abovementioned inconveniences. Thus, the discovery pertains precisely to this issue. Stable nanoscale macrocycle/D3 particles in water can be used as a smart food supplement of prolonged action, in other words, one dose can provide a constant supply of vitamin D3 to the body for a long time without repeated intake.

The results showed a unique feature of the obtained macrocycle/D3 systems to form nanoporous films on the surface when the solution dries. Such systems were described in the literature only a few years ago, but there are practically no examples of the use of such systems in medicine. A distinctive feature of these new nanoporous films is the ability to protect encapsulated vitamin D3 from aggressive ultraviolet radiation. The disadvantage of using pure vitamin D3 on the skin surface is its rapid destruction by ultraviolet light. Further work will focus on studying the properties of this material.

Towards new nanoporous biomaterials: self-assembly of sulfopillar[5]arenes with vitamin D3 into supramolecular polymers