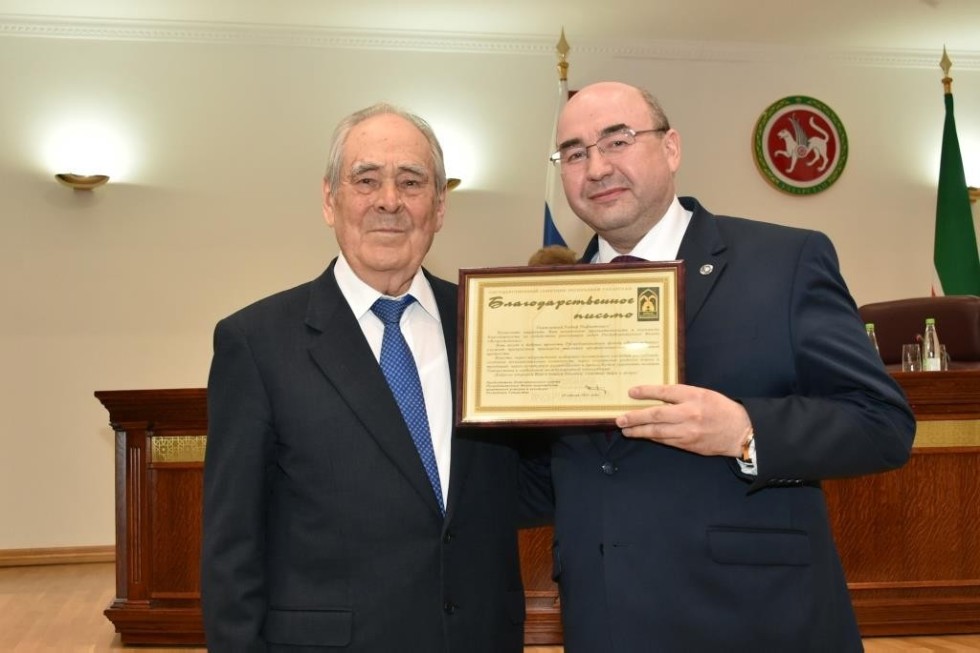 Director of the Institute of Philology and Intercultural Communication received a commendation letter in Kazan Kremlin on April 16.

The event was held by State Counselor of Tatarstan, Head of Yanarysh (Revival) Foundation Mintimer Shaimiev, Executive Director of Yanarysh Foundation Tatiana Larionova, and others. It was scheduled to celebrate the International Day for Monuments and Sites, which is April 18.

Counselor Shaimiev spoke about the Foundation’s activities, notably the reconstruction projects of Bolgar and Sviyazhsk (now both are UNESCO Heritage Sites), the construction of Bolgar Islamic Academy, the complete recreation of the Cathedral of the Kazan Icon of the Holy Mother, and the establishment of a network of multilingual middle schools called Adymnar (Steps). He noted that the Foundation is widely supported by the community, state officials, UNESCO, and international bodies.

Among the awards and tokens given out on April 16 were ‘100 Years of the Tatar Autonomous Soviet Socialist Republic’, ‘Distinguished Builder of the Republic of Tatarstan’, commendation letters from the President of Tatarstan, and commendation letters from the Revival Foundation. One of the recipients of the latter was Radif Zamaletdinov, Director of the Institute of Philology and Intercultural Communication.

Among the contributions made by Zamaletdinov and his colleagues is a Tatar language textbook for Adymnar schools.

Source text: Office of the President of Tatarstan, Rufina Gimaletdinova