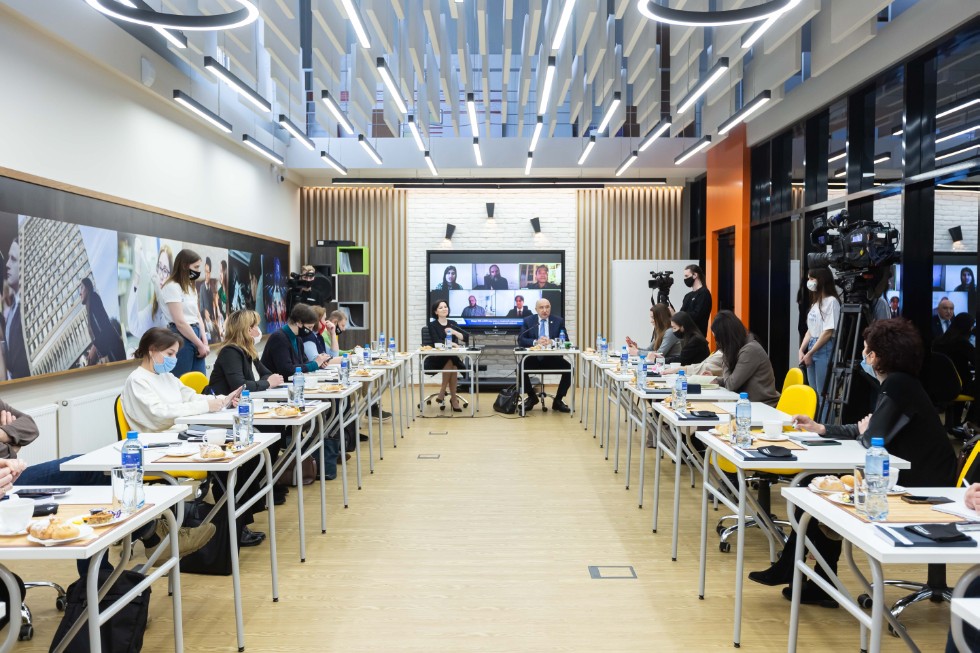 A long conversation with journalists was arranged on 5 February.

Ilshat Gafurov gave an extensive coverage of many topics pertaining to the current developments at the University. Here are some excerpts from his answers.

On creating a new department of industrial design

A decision was made to merge several departments – the Department of Design, experts in industrial design from Naberezhnye Chelny Institute, and the Department of Territorial Development. It will be headed by Karina Nabiullina, former employee of Kazan State University of Architecture and Engineering.

The situation is getting closer to normal with the coronavirus pandemic, but it’s doubtful that the Uni will return 100% to previously existing formats. There will be a massive influx of new Internet-based programs, which is only natural for such a large and diversified institution. KFU will also pay special attention to biotechnology, implementing elements of this discipline in various other programs, such as physics.

We finished 2020 with a budget of 13 billion rubles, of which half was from non-public funding. Over 80 percent of our Open Labs created under the aegis of Project 5-100 will continue working after the project ended in 2020 — they have become self-sustainable.

According to the existing plans, the SALP admission contest is going to be presented before 1 March 2021. As previous successful participants of the Project 5-100, we are automatically entering the first stage. Our chances will depend on the provisions of the contest.

I think KFU’s chances are pretty good. One of the prerequisites was to establish a consortium for a specific purpose. We’ve made just that with the World-Level Research Center in Liquid Hydrocarbons.

On including the Engelhardt Observatory into the UNESCO Heritage Lists

We’ve created a road map, and everything is going well. Our experts already have the relevant experience. If there are no hiccups, we will be able to do this in 2022 or 2023.

On the Year of Science and Technology in Russia

We have our own plans for this year.

Firstly, we are planning to open a university technology park before end of year. Several pavilions of Kazan Expo, a new expo center near Kazan, were transferred to the University, about 18,000 square meters in total. This is where the park is going to be situated.

At the Engelhardt Observatory, there will be a special facility for educational and entertainment events, including a ski track and a bicycle route. Living quarters are also planned.

In September, we plan to open a dentistry clinic. It will be a full-scale research center on par with our existing Center for Precision and Regenerative Medicine.

Obviously, events are scheduled for the 60th anniversary of the first human spaceflight.

In May, the traditional International Forum on Teacher Education is going to be held. Several events with UNESCO are in plans as well.

Also, our center for research in autism spectrum disorders should open doors this first quarter. It’s a special kindergarten targeted at pedagogical research.