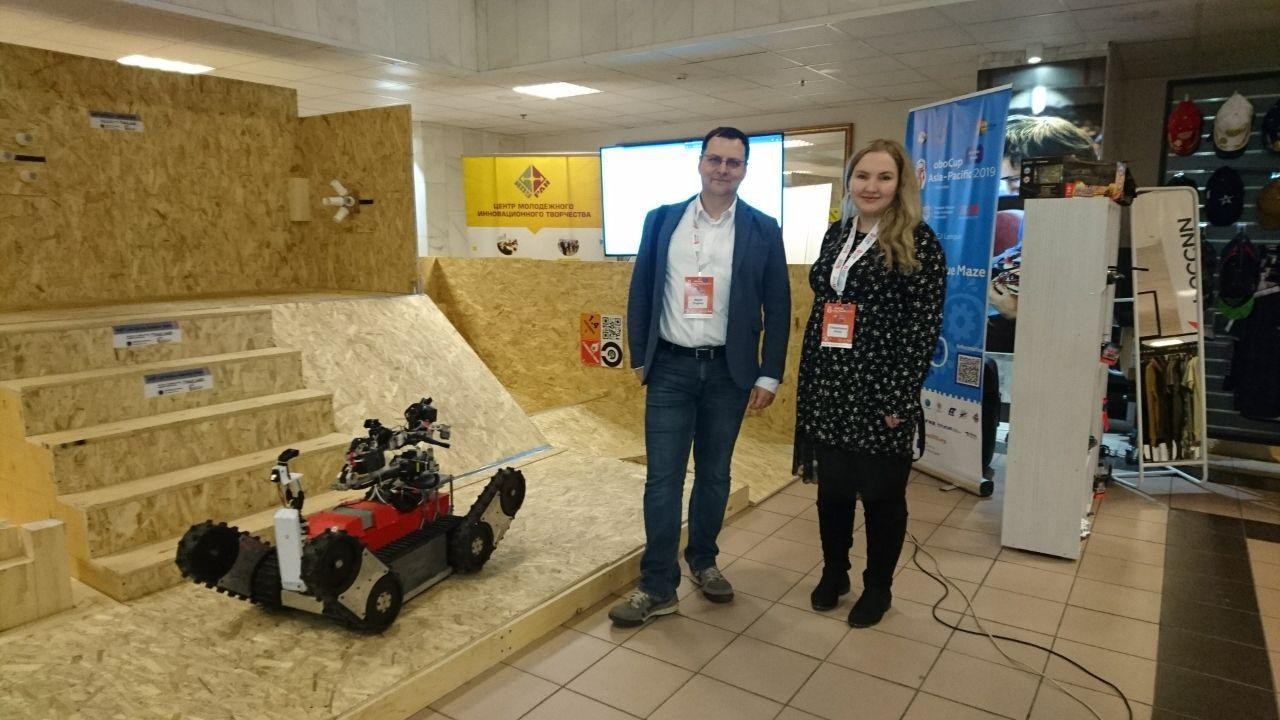 From November 6th to 11th, 2019, the International championship on robotics "RoboCup Asia-Pacific 2019" among the countries of the Asia-Pacific region was held in Moscow, Russian Federation. A Head of the Laboratory of intelligent robotic systems (LIRS) Evgeni Magid, an employee of LIRS Roman Lavrenov, and a 2nd-year student of the "Intelligent robotics" master's program Elvira Chebotareva visited the championship in order to exchange experience.

RoboCup is an annual international robotics competition that promotes research in the field of artificial intelligence. Since 1993 RoboCup competitions have become an important indicator of the development of educational and professional robotics. The purpose of the event is to develop robotics in Russia, to promote scientific and technical creativity and to form competencies in the field of high-tech production with the use of robotic systems in the youth environment, and also to increase the prestige of engineering professions among children and young people by promoting their professional self-determination. Competitions are held in a number of categories, including several types of Robo-football, @Home, @Work, Junior, Robo-simulators and search and rescue robotics.

On the sidelines of the championship, there was a working meeting of scientific groups from Thailand, headed by professor Jackrit Suthakorn, and Russia, headed by professor Magid, hat was held within the framework of the RFBR joint research project " Information System of Emergency Situations Management in the areas of Floods and Landslides with Assistance of Distributed Heterogeneous Group of Robots". During the meeting, the Thai team demonstrated a full-scale test stand of 6 square meters, a 30-meter full test site (drawings) and search and rescue robot used in the joint project, The Thai team also gave a number of practical recommendations for the development of a similar test site at the Kazan Federal University.

At the meeting of the RoboCup national Committee, Evgeni  Magid was elected as a new member of the national committee. The main mission of the national committee is to promote the RoboCup initiative on the territory of the Russian Federation, to organize and conduct RoboCup events on the territory of the Russian Federation, and to provide information support. Within the framework of the Committee, professor Magid will be responsible for the development of international cooperation.

Evgeni Magid shared us about the past competitions and the workshop:

"This year Russian Federation hosted the “RoboCup Asia Pacific” championship for the first time. Unlike children's competitions, such as WRO or FRC, RoboCup is a really serious "adult" championship, which was created by Japanese scientists in 1993. In the championship, of course, Junior children's leagues have appeared over time, but still the main leagues, such as Robo-football, @Home, @Work are a difficult test for participating teams that are trained at the world's leading universities. This year in Moscow 208 teams from 12 countries and more than 20 regions took part in various championship leagues. Russian participants showed excellent results, and in some categories Russian teams got all the pedestal. Teams from China and Iran also showed good results. In the final of Robo-football the Russian team defeated the Iranian team with a score of 9:1. We would like to prepare the team of the Higher Institute of Information technologies and intelligent systems (ITIS) to participate in the championship next year, but this decision remains with the University management, as preparation and participation in competitions require a significant budget throughout the year."