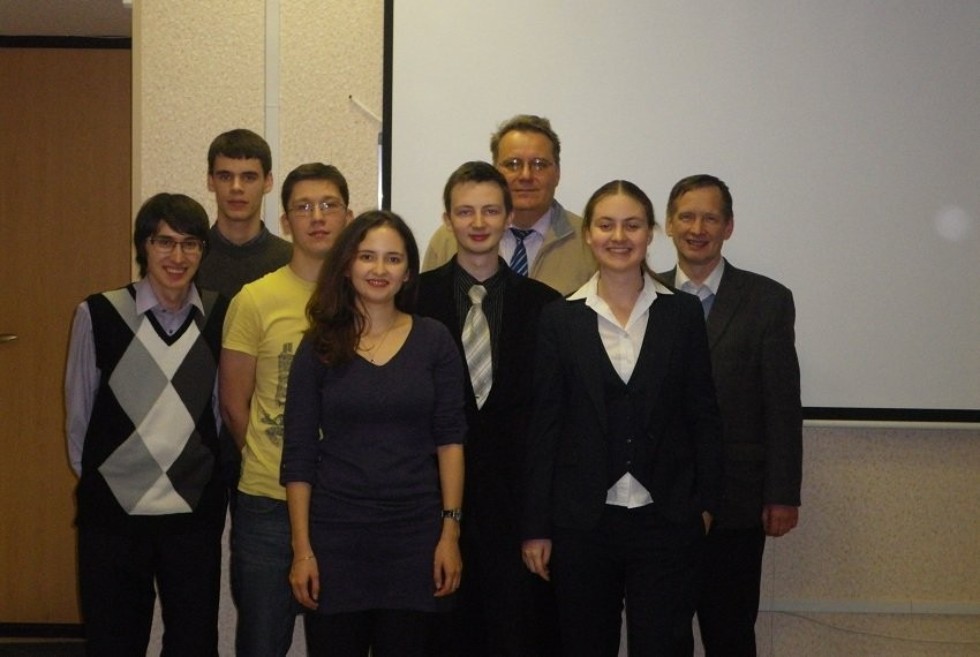 With the expansion of man's ideas about nature, it became clear that the path of linear analysis "from the simple to the complex," which was set at the time of Descartes and on which rational thinking is based, exhausted itself. The rapid development of new technologies requires the presence of a completely new type of scientists who could generate new fundamental ideas and effectively apply them in practice, as well as a new generation of engineers capable of deeply understanding fundamental sciences and successfully working with new high-tech equipment. The purpose of the master program "Physics of Complex Systems" is to teach the analysis of complex systems without dividing them into simple components, training elite scientific managers who are able to work in science and in the field of its organization in the face of great uncertainty and risks, and also able to respond quickly and effectively on the arising problems. The developed program of the master's training "Physics of Complex Systems" will form the following competencies and skills for students:

The Educational and Scientific Center "Physics of Complex Systems" was founded in 2009 by professor D.A. Tayurskii. in order to implement an innovative international master's program jointly with the Institute of Problems of Mechanics and Advanced Materials Science ISMANS (Le Mans, France). In 2011, the first graduate program was held. All graduates of the program entered the postgraduate course - KFU (Kazan, Russia), RIKEN (Wako, Japan), CEA (Grenoble, France).

The curriculum includes both general courses

On the basis of the educational science center "Physics of Complex Systems" a laboratory for the computer design of new materials was created. Based on the MedeA software package, it is possible to predict material properties using simulation methods. The complex is unique in its capabilities and is used in leading laboratories of the world (Japan, USA, Europe).

The main areas of scientific activity are:

There are scientific links with the following universities and organizations:

ISMANS (High School of Mechanics and Materials Science) is a consortium of engineering schools, a research laboratory in the field of science and management, and a high-tech company working together to train potential scientists and engineers of the 21st century. The Educational and Scientific Center "Physics of Complex Systems" carries out close cooperation with ISMANS. Every year French students undergo summer internships in the UC, and undergraduates of the UC "Physics of Complex Systems" have the opportunity to study at ISMANS for one year to obtain a French engineering diploma in the specialty "Molecular modeling." In 2011, three undergraduates of the FSS A. Petrova, Yu. Lysogorsky, D. Timerkayeva received degrees in physics from the KFU, as well as a French engineering diploma in the framework of the cooperation between the UC "Physics of Complex Systems" and the ISMANS Institute.

RIKEN (Institute of Physical and Chemical Research) is a major research center in Japan. Founded in 1917, today RIKEN plays a key role in science research in Japan. The laboratory has created a world-class laboratory infrastructure that allows Japanese scientists, together with colleagues from other countries, to work effectively in the most modern areas of scientific research and to participate in the development of advanced technologies. RIKEN conducts research in such fields of science as physics, chemistry, biology, medicine, technical and computer sciences. Since 2008, within the framework of cooperation between the KFU and RIKEN, a program of joint training of graduate students with a dual Russian-Japanese leadership (headed by prof. D.A. Tayurskii) is working. In October 2010, an agreement was signed on scientific cooperation between the Institute of Physics of the KFU and the Institute of Advanced Sciences (Advance Science Institute), which is part of RIKEN, as well as an agreement on the organization of a joint laboratory at the Physics Institute of the KFU. April 28, 2011 at the Institute of Physics KFU defended the thesis of Alexander Badrutdinov - a graduate student of the Institute of Physics KFU and the Institute of Physical and Chemical Research RIKEN. The uniqueness of this event lies in the fact that after defending the thesis the young scientist immediately received two academic degrees - a Russian Ph.D. degree in physics and mathematics and an international Ph.D. in Philosophy from the RIKEN Institute. In the laboratory of low temperature physics RIKEN at the moment, Kazan studies of graduate students (graduates of the FSS) - R. Batulin and N. Beysengulov.

At the University of Turku on March 14, 1957, the Vihuri Laboratory was set up to conduct fundamental research, in particular, in the field of low-temperature atomic physics. Most of the studies conducted in the WPL (Wihuri Physical Laboratory) are related to fundamental physics. Nevertheless, there are constantly several short-term applied projects that are carried out together with industrial enterprises. The laboratory conducts research on the physics of semiconductors, especially in superstrong magnetic fields, in magnetism, superconductivity, and nuclear resonance spectroscopy of solids. Joint research is conducted in four directions: atomic hydrogen, magnetism and superconductivity, nanophysics and NMR in solids.

At the moment, KFU graduate student, graduate of the FSS D. Zvezdov, is conducting experiments at this university.

Weekly on Wednesdays at 16-00 a joint seminar is held with international partners. You can sign up for the seminar by skype physcomsys.