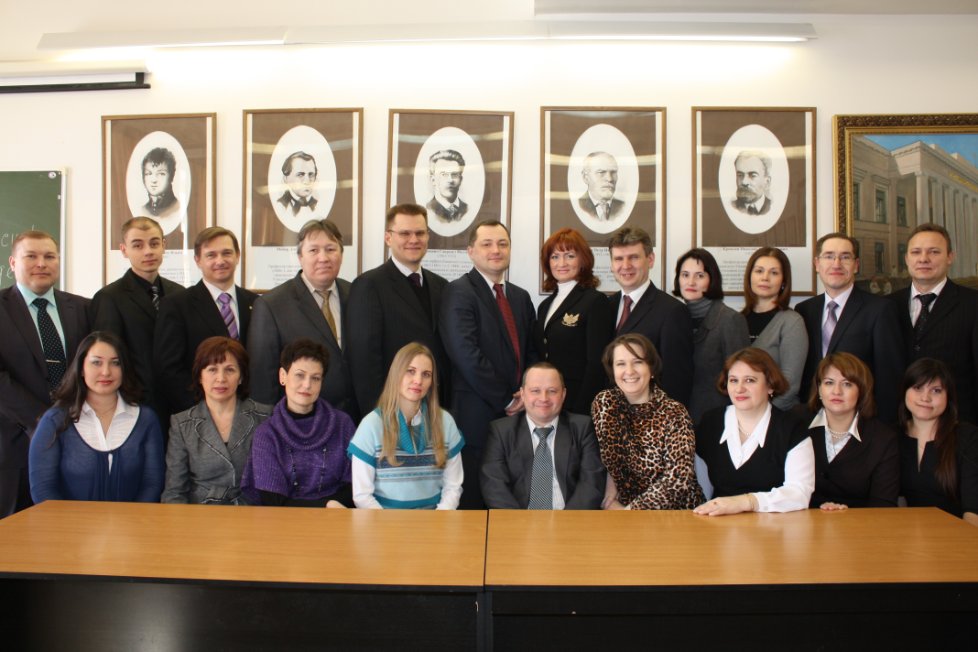 The history of the Department goes at least as far back as the nineteenth century, when Kazan Imperial University was founded. Established in 1804 by the University Statute, that division was first called Department of Civil and Criminal procedure of Russian Empire. Since 1835 it had been carrying the name “Department of civil legislation”- common, special, local. Distinguished scholar D.I.Meyer worked at the Department from 1845 to 1855. He was awarded Ph.D degree for his research about the Old Russian right of pledge in 1848. L.N. Tolstoy, who had been studying at Law faculty of Kazan university at that time, wrote a coursework on Katherine II legislation under scientific supervision of Professor Meyer. In his research L.N. Tolstoy compared  the project of the Mandate of Katherine II with Montesquieu’s “The Spirit of Law”. As Tolstoy claimed himself his creative work was mostly influenced by D.I. Meyer. Due to Meyer’s departure to Saint Petersburg in 1856, outstanding scholar S.V. Pahman, who had been awarded a rank of Professor in ordinary, was moved to the Department and worked there until 1859.

According to the Statute 1863, the Department received the name: “Civil law and civil judiciary and procedure”, and conforming to the Statute 1884 – “Civil law and procedure”. Famous Russian academic and soon thereafter the deputy of the I State Duma, G.F. Shershenevich worked at the Department from 1896 to 1905. Professor of Civil Law A.A. Simolin defended a thesis for a Doctor’s degree in 1916. The name of his research was “The influence of gratuitousness in civil law”.

In 1912 D.M. Genkin, who later on became honored worker of science of RSFSR, passed exams for the Master’s degree and was invited as an unestablished  university lecturer. It was B.B. Cherepakhin, who graduated from Law faculty of Kazan University in 1917, and later became a prominent legist and a great authority in civil law. The same year B.B. Cherepakhin was chosen as a doctoral fellowship holder from Department of Civil Law of Kazan University.

After the October Revolution Law faculty of Kazan University was abolished. Faculty of Social Sciences was founded on the base of Law faculty and Faculty of history and included, in addition, 7 departments of jurisprudence, except the department of civil law. Civil law was taught by the professors from other departments.

In 1931 legal education moved from the University to the Institute of Soviet Law, which was renamed in 1936 Law Istitute, where Department of Civil law was founded. The department had been headed by V.G. Barishnikov until the Institute was abolished. After its cancellation and returning Law faculty to the University in 1952, Department of Civil law and procedure was established, on the base of which Department of Civil and Business Law was founded in 2005. Established on December 1, 2005 by the Order of University Chancellor, it was headed by Mikhail Chelyshev from the first days. In 2009 he defended a thesis for a Doctor’s degree for his research “The system of inter-branch connections of civil law: civilistic analysis”, and in 2010 he was awarded a rank of Professor. Because of tragic death of Mikhail Chelyshev 2013, Ph.D. Kamil Arslanov has been appointed acting head of the Department.

Over its history the Department has been headed by:

Nowadays, 31 academic (1 Doctor of Science and 20 Ph.D.) and 2 specialists in academic methodology work at the Department.

The main research area of the Department is “Ratio of civil law and other branch regulation of property and non-property relations. Modern Issues”.

All graduates are assigned a ‘college advisor’.

There are several special interest groups, working at the department:

All the academics take part in various international and All-Russian conferences, publish scholarly monographs and research articles in foreign and Russian scientific journals, recommended by VAK.

The Department collaborates with other universities’ departments of Civil Law, particularly with the universities of Ukraine, Belarus, Kazakhstan, Poland, Germany.

Most of the academics successfully combine scholarly activities and teaching with practice of law.  There are lawyers, heads of juridical offices, judges, chief arbitrators. R.I. Sitdikova and O.N. Nizamieva have been elected experts of Council of the Federation Committee on Constitutional Legislation, Legal and Judicial Affairs and Civil Society Development.

The department provides lectures and seminars on following subjects:

The deals with real estate

Regulatory Law for the Stock Market