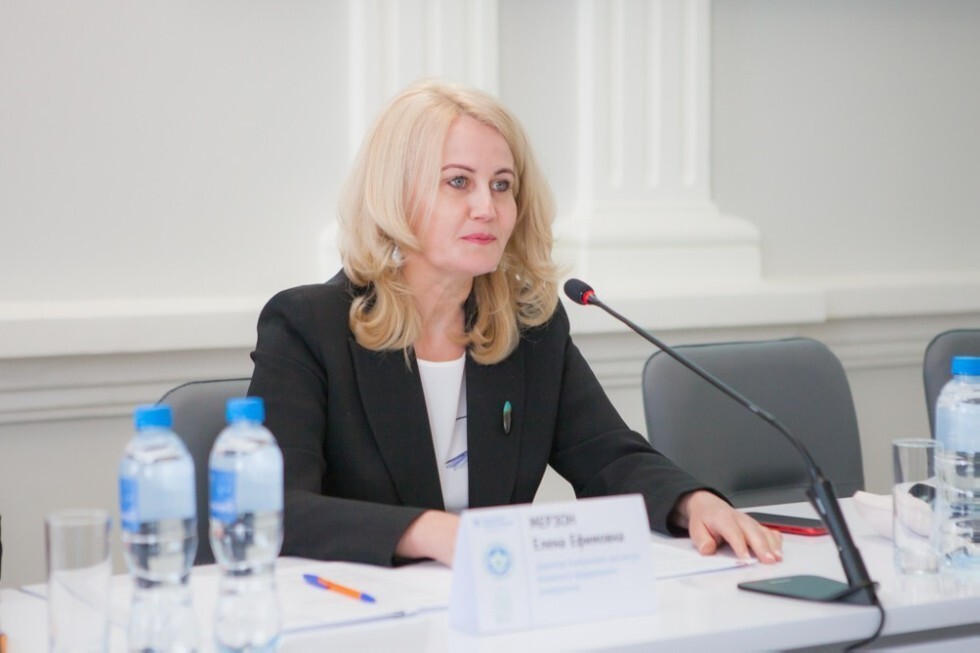 On the first day, 97 researchers presented their scientific and practical work.

Elabuga Institute of KFU hosted the opening of the XI International Turkological Conference "Islam in Russia: History, Culture, Economics", which is to be held from May 13 to 14 in a mixed format. The conference is attended by scientists in the field of philology, history, economics, pedagogy from Russia, as well as from abroad: Kyrgyzstan, Uzbekistan, Azerbaijan, Turkmenistan, Turkey and Kazakhstan. Russia is represented by scientists from Bashkortostan, Moscow and the Republic of Tatarstan.

Elena Merzon, Director of Elabuga Institute greeted the participants of the event and noted that the XI International Turkological Conference is dedicated to the 1100th anniversary of the official adoption of Islam in the Volga Bulgaria and is held as part of the Year of Cultural Heritage of the Peoples of Russia: “It is no coincidence that the conference is held at Kazan Federal University. Since the founding of the educational institution, special attention has been paid to the development of the humanities, the study of the history and culture of the Turkic peoples, their language and literature. It was within the walls of Kazan University that the study of the history of Islam, on the one hand, and the history of Eurasian civilization, on the other, reached the international level.”

Elena Merzon emphasized that the participation of Kazan Federal University in the large-scale state development program "Priority - 2030" served as a new challenge for research in the field of studying and protecting the traditional spiritual, moral, historical and cultural values ​​of Russia and its regions.

Mufti of Tatarstan, Chairman of the Spiritual Administration of the Republic of Tatarstan Kamil Hazrat Samigullin said: “The upcoming 1100th anniversary of the official adoption of Islam in the state of Volga Bulgaria is considered one of the most memorable dates in the history of the Tatar people and all Russian Muslims. All conditions for the development of Islam have been created in Tatarstan today: madrasahs are being created and are being created, Islamic education is being developed, specialists in Islamic finance are being trained, international thematic meetings and conferences are being held. Our republic is a vivid example of the fact that Russia is a home for numerous nations united by love for their common Motherland.”

Vice-Rector for Academic Affairs of Osh State Pedagogical University Kanybek Raimbekov joined the grand opening in an online format: “On behalf of the faculty and on behalf of the rector Bekmurza Zuluev, I congratulate you on the start of the conference! I wish you fruitful work, creative solutions, activity and the acquisition of friendly contacts. Let Elabuga Institute continue to be a place for interesting meetings!”

The conference opened with a plenary session. The first speaker was Khatip Minnegulov, Doctor of Philology, Professor of the Department of Tatar Literature of the Institute of Philology and Intercultural Communication of KFU with the topic “Islam and Tatar Literature”. The speaker spoke about the fact that literature has been living side by side with the culture of peoples for centuries, reflecting the mood and feelings of the public. Hatip Minnegulov also presented a number of works reflecting the Islamic faith and Islamic worldview.

Erciyes Sevinch Uchgul, Doctor of Sciences, University Professor made a presentation on "Semantic pragmatic aspects of the word "helal" in the Turkish language." She spoke about the rich semantics of the word, citing quotations from sacred books and fiction for clarity.

“Prominent lecturers and gifted scientists speak today. Economics, language, drama – this all is very interesting to listen – the Turkic world is very large, we still have so much to study,” Sevinch Ucgül shared her impressions.

Fayaz Khuzin, Doctor of Historical Sciences and Corresponding Member of the Academy of Sciences of the Republic of Tatarstan presented a study on the topic "Volga Bulgaria and the Muslim world in the 10th - early 13th centuries." During his speech, the professor stated that the year 737 was the heyday of Islam in the Volga Bulgaria, but the annalistic monuments of that era cast doubt on the fact of a full-scale adoption of religion.

Svetlana Babenkova, Candidate of Economic Sciences, Senior Researcher at the Center for Arab and Islamic Studies at the Institute of Oriental Studies of the Russian Academy of Sciences (Moscow), spoke about the elements of the Islamic economy as an anti-crisis mechanism of Russian-Turkish "bridge-relations". Svetlana Babenkova began her speech with the idea that due to the current political and economic situation, partnership relations between the Russian Federation and the East will only get stronger. Thus, the speaker noted that the Turkish banking industry, and in particular the position of Islamic banks and the introduction of an interest-free financial ecosystem, are an interesting experience in the field of economics.

Alfat Zakirzyanov, Doctor of Philology, Head of the Department of Literary Studies of the Institute of Language and Literature named after A. G. Ibragimov of the Academy of Sciences of the Republic of Tatarstan presented a report on the topic "Tatar drama at the beginning of the 21st century: the search for a modern hero." Alfat Zakirzyanov noted: "In modern Tatar drama there is a tendency to include religious and philosophical ideas in the storyline of the work to create a holistic view of the national identity of the life of the Tatars." The speaker added that now the thoughts and views, moral values ​​contained in the teachings of the Koran are widely reflected.

Albert Nigamaev, Candidate of Historical Sciences, Associate Professor of the Department of General and National History of Elabuga Institute of KFU, addressed the issue of law in Volga Bulgaria of the archaic period. The teacher studied the pre-Mongolian period of Volga Bulgaria and spoke about the types of criminal legislation that existed at that time: the death penalty, talion and composition.

In total, 97 reports were presented at the conference, 18 of which were foreign.