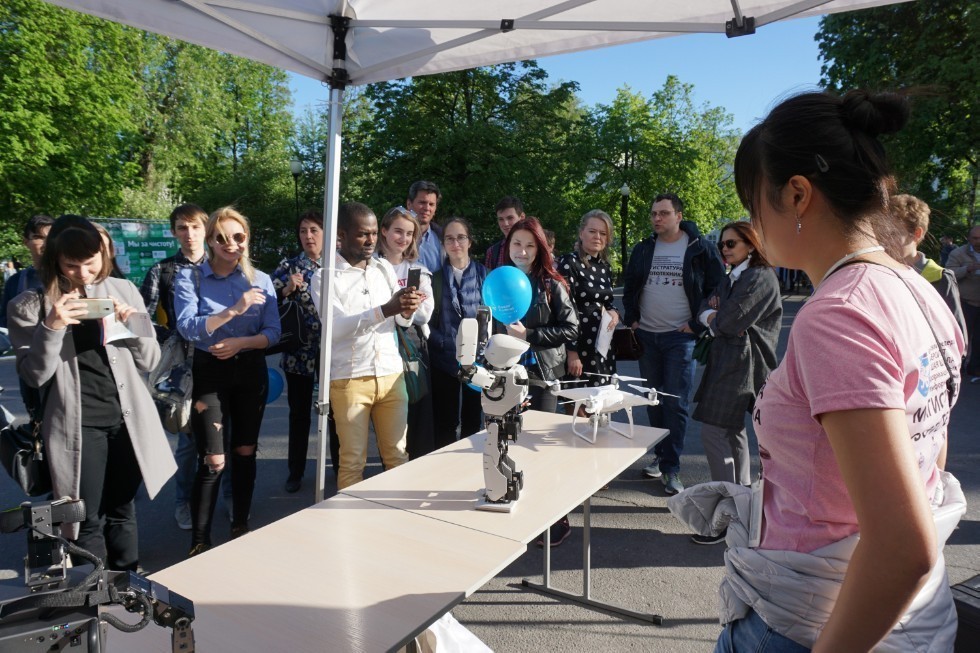 On May 21, the Higher Institute of Information Technology and Intelligent Systems (ITIS) took part in a large-scale event "Night of Discoveries" in KFU, which gathered a record number of guests this year. Popular science lectures, interactive and entertainment were organized for guests.

All the guests were waiting for an exhibition and demonstration of robots of the latest models from the Laboratory of intelligent robotic systems (LIRS) of the Higher Institute of ITIS KFU.

Each of the robots was shown in action by students and employees of the LIRS: they drove, walked, scored a ball, greeted people, delivered ITIS leaflets. All the questions of the guests were answered by a Head of the LIRS, Professor Evgeni Magid, and the staff of the laboratory.

There were many children among the guests of the event, and they were particularly delighted with the small-sized anthropomorphic robots ROBOTIS-OP2 and ROBOTIS-OP3. The kids and their parents were happy to take pictures with them. On the eve of the Football World Cup, the Higher Institute of ITIS together with the Institute of Engineering have planned a friendly match in robofootball, which will be attended by teams of two institutes, each of which consists of three robots.

"It is quite difficult to teach robots to recognize the ball and find the goal, but we teach this. If students come to our program, then in two semesters they will be able to solve even these complex tasks, for this they will have all the tools," said Evgeni Magid.

One of the surprises of the event was a dance flash mob from students of the Higher Institute of ITIS, which gathered a lot of applause!

Ôîňîăđŕôč˙ čç ěŕňĺđčŕëŕ: The Laboratory of Intelligent Robotic Systems held an exhibition of anthropomorphic robots at the educational event "Night of Science"