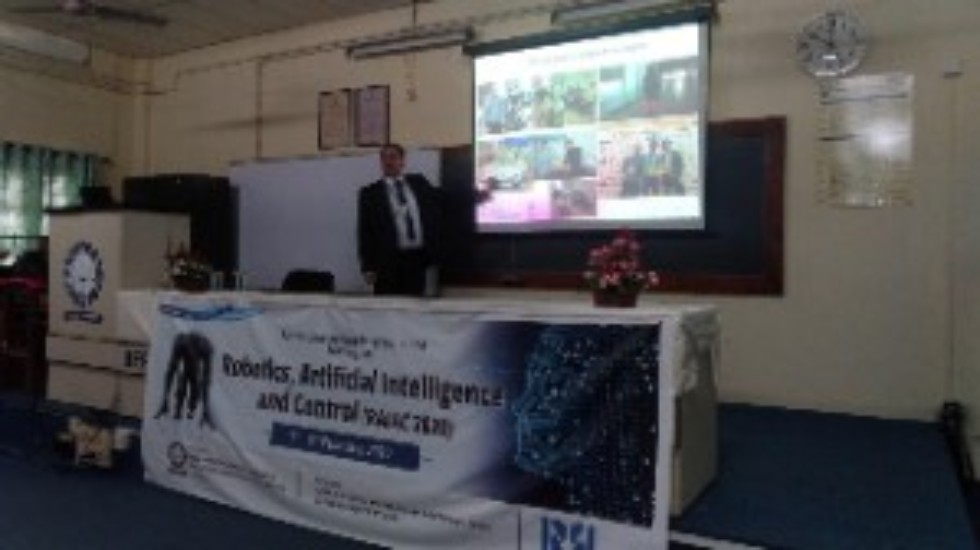 On February 3-8 at the National Institute of Technology Calicut (NITC, Kozhikode, India) took place the FDP on Robotics, Artificial Intelligence and Control, RAIAC-2020. It was held with support from the Indian Robotics Society, the Indo-Korean Joint Network for Robotics, and the Indian Institute of Technology (IITD), Delhi. On the first day of the symposium, Professor, head of the Laboratory of Intelligent Robotic Systems Evgeni Magid, gave a talk: “Interaction between a Robot and a Human”.

On February 4, it was held a ceremony to mark the first issue of the newsletter of the Faculty of Mechanical Engineering of the NITC Institute, during which the Director of the Institute, Professor Shivaji Chakravorti, Decan of the NITC Department of Mechanical Engineering, Professor José Mathieu, Professor Evgeni Magid, Professor S.K. Sakha, Head of the Department of Mechanical Engineering, IITD; Professor of the National University of Chungnam Sul Jung (South Korea) and Professor of the Indian Technological Institute, Rourke Pushparaj Pathak (India) delivered welcoming speeches. Professors emphasized the importance of international cooperation in science and education, Professor Mathieu asked guests from Russia and South Korea to comment on the possibilities of short-term internships for Indian students in leading foreign robotic laboratories. In a dignified manner, NITC Director Professor Shivaji Chakravorty, together with Professor Evgeni Magid, opened the envelope with the first issue of the newsletter.

On February 5, took place the official opening ceremony of the symposium, there foreign and Indian professors said parting words to the participants. Professor Magid told the participants about his difficult scientific path and advised Indian students and young professors not to limit their opportunities to any barriers and fears of something new, he also invited them to study and improve their skills at KFU. At the end of the ceremony professors Shivaji Chakravorti, S.K. Sakha, Evgeni Magid, Sul Jung and Pushparaj Pathhak lit the traditional Dipalakshmi lamp in honor of the symposium opening.

Leading professors give presentations in artificial intelligence, robot motion control, underwater robotics, the use of deep learning in technical vision, kinematics and dynamics of manipulators and mobile robots, anthropomorphic and serpentine robots, robot control based on machine learning methods and other topics in the field robotics. Professor Magid also gave a speech the topic of which was the Search and Rescue Robotics in Earthquakes, Flood, and Land Slide Disasters, he also presented the results of the international project “Informational system for management of flood and land slide disaster areas using a distributed heterogeneous robotic team”.

On the last day of the symposium, students prepared and presented their projects, in which, according to the conditions of the competition, they had to use the new knowledge gained during the symposium. LIRS employee Ramil Safin, who participated in the symposium as a listener, spoke on the project “Modeling an algorithm for balancing a two-wheeled mobile robot using an RBF-PID controller in Ros/Gazebo's environment” and, according to the evaluation results the he took third place among 20 teams.

Ramil Safin told us: “Attending the symposium as a listener was a rewarding experience. Each speaker represented projects developed by the scientific team related to robotics, artificial intelligence, so I get a lot of new useful information for myself. During the symposium, participants had to split into teams of two people to develop their mini-project. According to the rules had to use the acquired knowledge in the framework of the symposium - and in my case it was an RBF-based PID controller - to implement some kind of robotic task. As a result, the teams demonstrated their projects to the jury and other participants. I am very glad that I had the opportunity to participate in this event. I also made friends with many Indian students, and I hope that over time we will also become famous scientists and be able to conduct joint research”.

Professor Evgeni Magid about the symposium: “I believe that we have adequately presented KFU at the symposium and were able to arouse a keen interest for the cooperation in the framework of scientific research that we have been actively conducting with the group of Professor S.K.Sakh since 2018, and as part of educational programs. We also plan to develop a system of individual short-term internships for foreign students in the Higher Institute of ITIS laboratories, which so far, unfortunately, are present only in a group format for student exchange. I am sure that this will contribute to strengthening the position of KFU in international ratings”.