LIRS students won prizes in the finals of the "DIGITAL START" contest of technological projects in the IT sphere
Main page \ Academic Units \ Physics, Mathematics and IT \ Institute of Information Technology and Intelligent Systems \ Research \ Laboratory of Intelligent Robotic Systems \ News 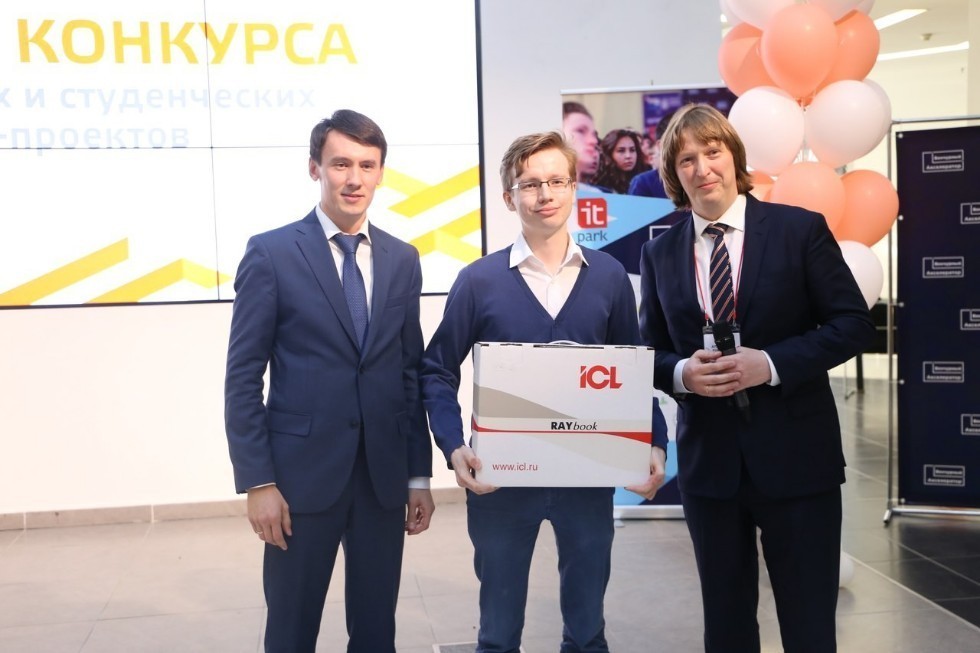 On April 10, four projects of students of the ITIS Higher School received several awards at once in the final of the "DIGITAL START" contest in the IT park.

The first place among the student projects from ICL Services was awarded to the project "Robotic swarm technologies", which was developed by Yuri Gerasimov, a master's student on “Intelligent Robotics” program and Aufar Zakiev, an employee and student of the Laboratory of intelligent robotic systems (LIRS). It is designed to solve a number of problems that exist today in performance of unmanned systems implement tasks such as terrain exploration, tracking objects, their search and transportation. The solution to these problems is the use of swarms, or systems of interacting drones. The team offered a new solution of increasing the capabilities of existing systems, and new products can be created on its basis.

Another LIRS’ project was awarded a prize. The name of the project is "Development of a client-server software package for managing and monitoring the state of the Servosila Engineer mobile robotic system", which was developed by Roman Lavrenov, a junior researcher of the LIRS, and Ramil Safin, a student and employee of the LIRS. The project received a prize from the Kama Innovative Territorial Production Cluster and an offer of collaboration. The project goal is to create a system that will allow a user to use and expand the functionality of the "Servosila Engineer" robot. At the moment, there is a number of problems with the robot that the team has solved: separate caterpillar control is not implemented, the cameraman does not have information about the state of battery charge, it is not possible to get images from all 4 cameras of the robot, etc. The LIRS’ developments allow expanding the robot's capabilities.

We congratulate our colleagues on the victory! We are proud of you!

įŅ“ŅŃ­Ó¶Ķ  Ķń ņÓ“Õ­ĶÓļÓ: LIRS students won prizes in the finals of the "DIGITAL START" contest of technological projects in the IT sphere