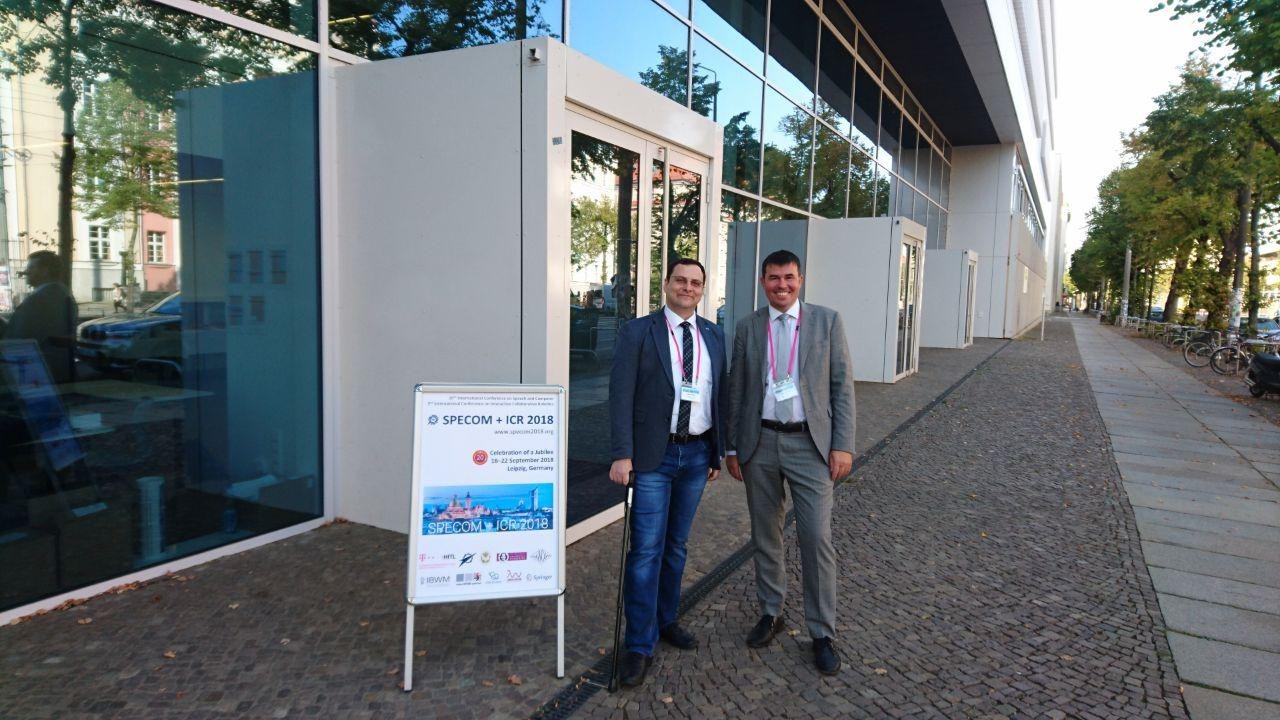 From September 18 to 22, the 20th International Conference on Speech and Computer 2018 (SPECOM 2018) and the 3rd International Conference on Interactive Collaborative Robotics (ICR 2018) are held jointly in Leipzig, Germany. The venue of the conferences is the Leipzig University of Telecommunications (“Hochschule für Telekommunikation Leipzig", HfT Leipzig), which is the second oldest University in Germany. SPECOM and ICR conferences are held due to the high demand for scientific and applied developments in the field of human-robot interaction. The ICR conference presented scientific papers related to solving complex problems of human-robot interaction, robot control, social and collaborative behavior of robots, as well as problems of applied use of robotic and cyberphysical systems. Proceedings of the conferences will be published in Springer publishing house and will be indexed in DBLP, SCOPUS, EI, INSPEC, COMPENDEX databases.

On September 19 Evgeni Magid, Professor of the Higher Institute of Information Technology and Intelligent Systems (ITIS), presented the joint work of employees of the Laboratory of intelligent robotic systems (LIRS) and Ritsumeikan University, Japan, in the section "Robot Control and Behavior". The topic of the report:

On September 20, Evgeni Magid within the framework of the poster section "Collaborative robotics", which he is the Chairman of, presented research by LIRS employees on the topic:

Evgeni Magid told us about participation in the conference:

"In my opinion, this is one of the most important conferences on speech recognition and collaborative robotics. Key Russian scientists from such organizations as Bauman MSTU, MIPT, HSE, ITMO, RUDN, MIREA, SPBSTU, TUSUR, SFedU, SWSU, SPIIRAS and other RAS departments, and a large number of foreign scientists from leading universities of Austria, Germany, France, Czech Republic, Serbia, Turkey and other countries participate in conferences. The report of KFU on coordinate markers aroused great interest among the audience, because autonomous calibration of robot cameras without human participation and using alternatives to the classic chessboard template is a new and relevant research. Last year we successfully conducted a one-year study on cameras calibration of the anthropomorphic Russian robot AR-601M with the support of the RFBR and the government of the Republic of Tatarstan. This year, also with the support of the RFBR and in collaboration with our Indian partners from the Indian Institute of Technology Delhi, we are exploring the possibilities of autonomous calibration of the Russian robot «Servosila Engineer». The new task, which is a logical continuation of our last year research, is more complex due to the significantly lower number of the robot’s degrees of freedom comparing to the robot AR-601M. In turn, LIRS’ poster report presented a broad analysis and active dynamics of swarm robotics over the past few decades, and was useful for listeners in the context of formalizing definitions and connections between multi-agent systems, sensor networks, swarm systems and other classic areas within this field of research. The LIRS team will now consider ways to prepare expanded versions of the submitted materials for future journal publications, taking into account the questions and comments received from listeners. The conference, in addition to the opportunity to present scientific developments and receive feedback from leading scientists, allowed to discuss potential joint projects and applications with Russian and foreign colleagues, topical issues of research funding and organization of the educational process».