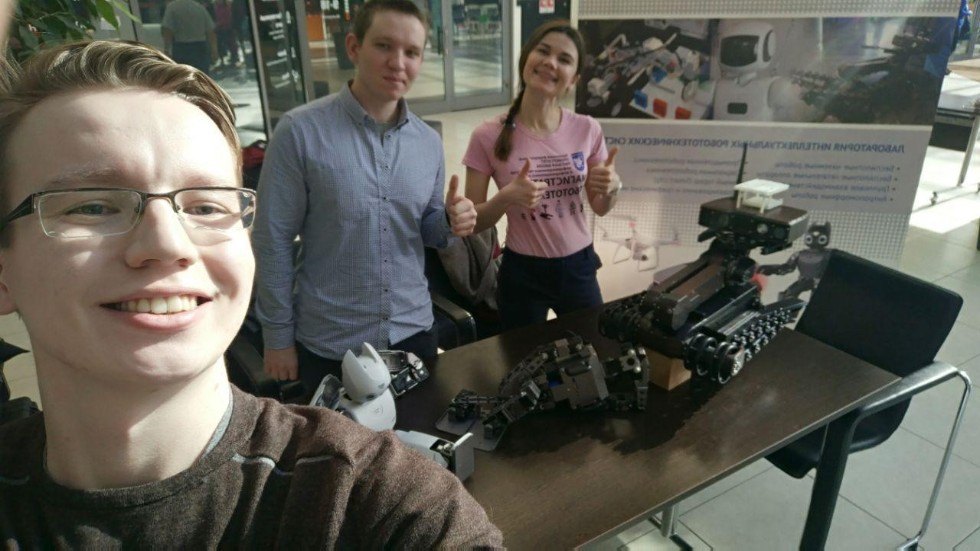 The event was held with the support of the Ministry of Digital Affairs and Communications of Tatarstan, the Kazan IT Park and the Higher Institute of Information Technology and Information Systems (ITIS) of Kazan Federal University.

For the second year in a row the Laboratory of intelligent robotic systems (LIRS) of the Higher Institute of ITIS introduces robots to children within this event.

This year Leysan Sabirova, Aufar Zakiev and Ramil Safin, who are employees of the LIRS, showed children (aged from 5 to 12) from many cities of Tatarstan anthropomorphic robots DARwIn models OP2 and OP3 and the Russian mobile robot "Servosila Engineer".

Ramil Safin shared his impressions about the young guests of Robosabantuy:

"The children DARwIn robot of the OP2 model arose great interest in children. Apparently, unlike the OP3 robot, which is outwardly gnarled and reproduces a male voice, the robot of the OP2 model had a corner in children and ladies hearts because of its cute appearance and childish voice. The children reacted violently when the robot found the ball and kicked it. An interesting fact is that men, dads, uncles and grandfathers of our guest, were more engaged in the search and rescue robot “Servosila Engineer". Adults asked about the sphere of robot application, its control, how suitable it is for military and rescue operations. And many mothers have asked questions about the Doors Open Days held at the Higher Institute of ITIS. They were also interested in bachelor's degree in robotics and which clubs they need to go to so that children can enroll and continue studying robotics at the Kazan Federal University. Also, the participants of the event were pleasantly surprised to learn that our LIRS team has such robots at the KFU, and we are developing algorithms for these robots".

"There were many pupils at the event, who participated in Lego robot competitions. Many parents have asked us questions about whether their children will be able to program real robots, because speaking about children Lego is just a modern highly intelligent toy. I told them that at the Higher Institute of ITIS, in order to start programming real robots, our students also use Lego robots to implement complex theoretical algorithms studied in the classroom. Thus, it is possible to turn complex material into an exciting game, in which bachelor degree students and also adult graduate students are involved with pleasure”.