Employees of the Higher Institute of IT IS presented the results of works on the section 'Artificial Intelligence, Internet of Things, Robotics, Information Technologies in Education' 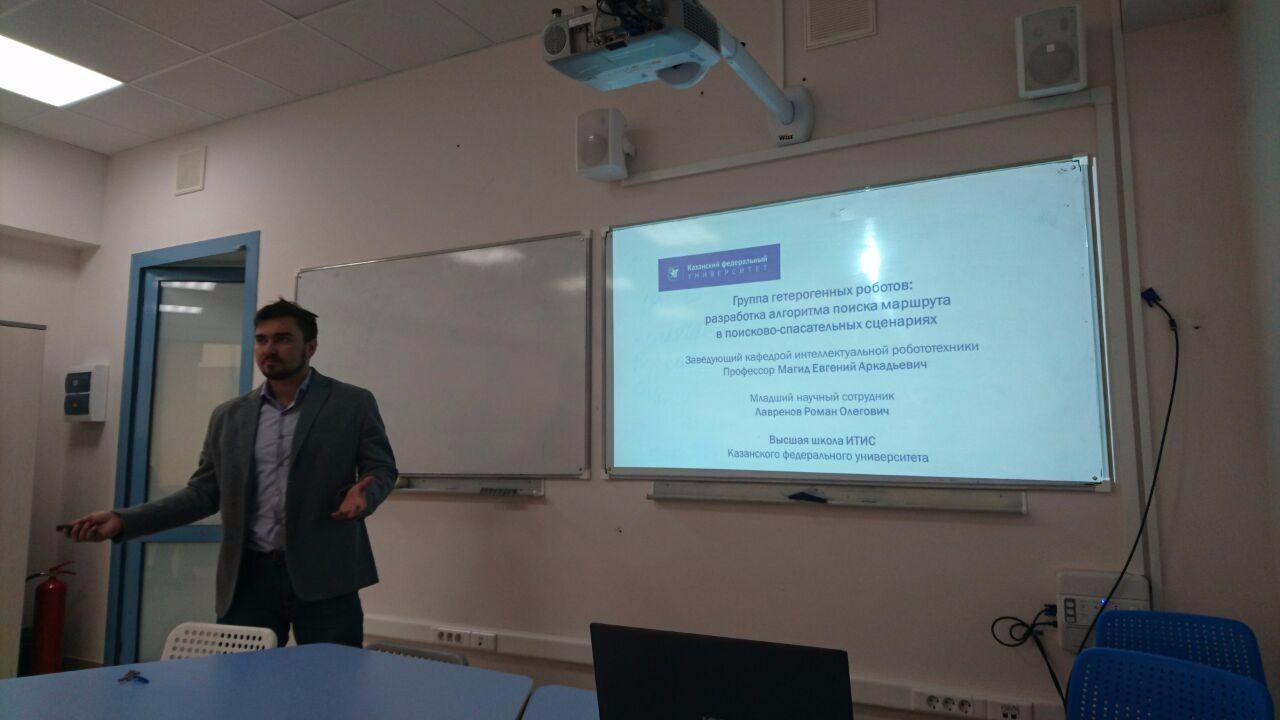 On 2nd February within the framework of the final conference of the Higher Institute of ITIS (KFU), was held the section "Artificial Intelligence, Internet of Things, Robotics, Information Technologies in Education". Students, employees, Head of the Intelligent Robotics Department Evgeni Magid, Deputy Director of scientific activity of ITIS Maxim Talanov ,and a Head of the educational program "Software Engineering" Mikhail Abramsky attended the event.
The section was opened by the student of the Higher Institute of ITIS Sergey Ostapenko, who presented his paper "Validation of the serotonin subsystem of neurobiologically inspired cognitive architecture", in which he told about the hypothesis of serotonin producing effect on the brain calculating process. Maxim Talanov continued the topic with his presentation on "Two-phase integration of realistic biosimulation and a real-time robotic system". He talked about the theoretical model of Hugo Leuheim called "A cube of emotions" and explained the relation between the level of neurotransmitters and feeling emotion.
A Head of the educational program "Software Engineering" Mikhail Abramsky spoke about the problems of current educational programs in the field of engineering and proposed a new approach to training. As a pilot projec, a full set of training in "Software Engineering" was launched in 2016, the distinctive feature of which is the development of engineering thinking among students and development of their competence in the IT field.
A Head of the Intelligent Robotics Department professor Evgeni Magid presented the Laboratory of Intelligent Robotic Systems, and talked about further plans for the development of the LIRS. Today applied scientific research of LIRS is focused on developments in the fields of unmanned transport systems, search and rescue robotics and humanoids. We are looking forward to open master's program in robotics in 2017.
The research Associate of LIRS Roman Lavrenov closed the section with presentation on results of his scientific activity of the project "Localization, mapping and searching for a path for an unmanned ground robot (UGR) with the help of a group of unmanned aerial vehicles (UAVs) using active collective technical vision and planning in common trustful space of a robots group ".

‘ÓÚÓ„ūŗŰŤˇ ŤÁ žŗÚŚūŤŗŽŗ: Employees of the Higher Institute of IT IS presented the results of works on the section 'Artificial Intelligence, Internet of Things, Robotics, Information Technologies in Education'