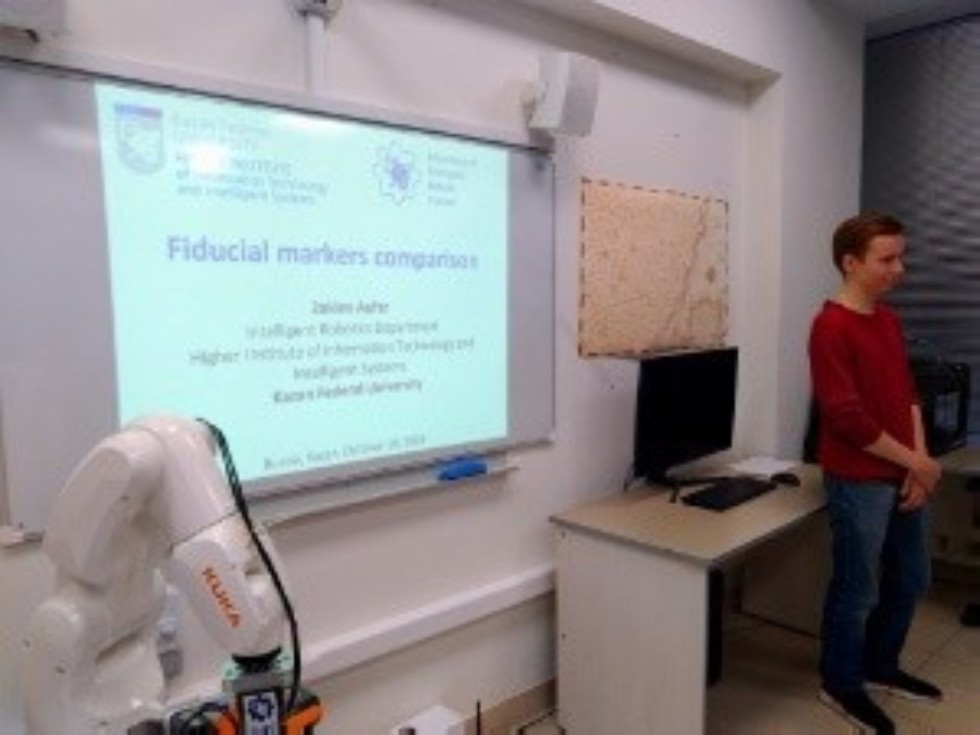 On October 11, representatives of the foreign project team from the Indian Institute of Technology, Delhi (India), represented by Professor of the Department of electrical engineering Sumantra Dutta Roy and his colleague Shantam Shorewal visited the the Laboratory of Iintelligent Robotic Systems (LIRS)  within the framework of the international project "Autonomous calibration of onboard cameras of a robotic system using coordinate marks applied to the robot's surface". LIRS employees Ramil Safin and Aufar Zakiev attended the meeting which was represented by the head of the laboratory, Professor Evgeni Magid.

During the tour over the laboratory the representatives of the delegation highly appreciated the work and modern equipment. In addition, the participants of both teams presented their projects and discussed their plans for further work on the project.

The Indian Institute of technology (IITs) is a group of fifteen Autonomous engineering — oriented higher education institutions in India. Most of them were established in the early 1950s and 1960s as institutions of national significance through special acts of the Indian Parliament. Institutions located in the cities of Kharagpur, Mumbai, Madras, Kanpur, Delhi, Guwahati and rourki, etc. the First IIT Institute was established in 1951, in Kharagpur (near Calcutta) in the state of West Bengal. In total, about 300,000 students start classes at the Indian Institute of technology each year. As of 2018, the total number of places for undergraduate programs in all IIT is 11,279.

‘ÓÚÓ„ūŗŰŤˇ ŤÁ žŗÚŚūŤŗŽŗ: A delegation from the Indian Institute of Technology visited the laboratory of intelligent robotic systems