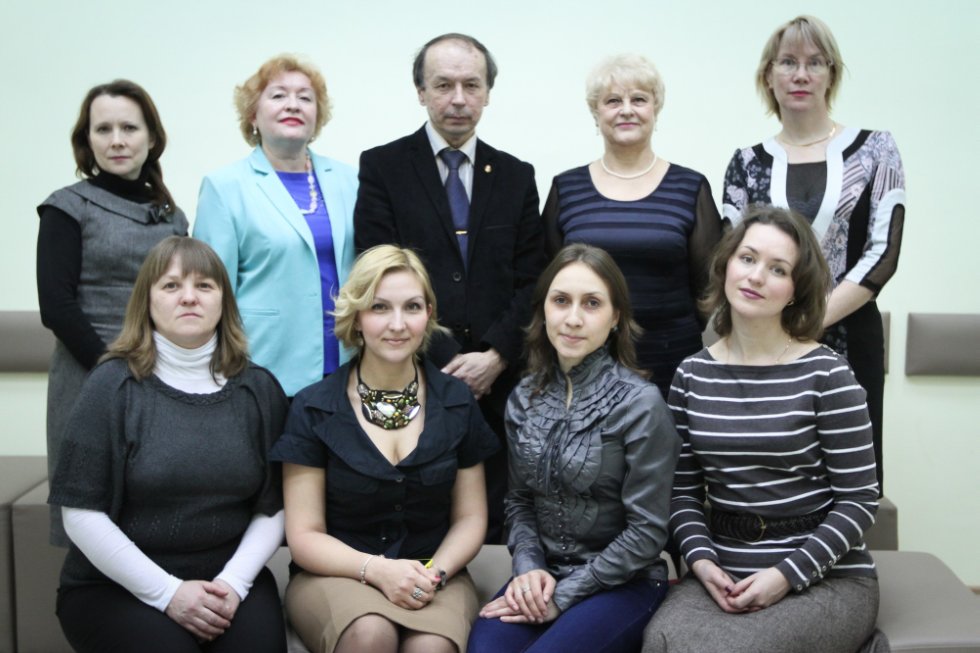 Pedagogy and Psychology Department of pre-school education was established in 2009, trains specialists for preschool educational institutions, teachers colleges and universities of the Republic of Tatarstan.

In 2013 a new pre-school education standard was accepted in Russia (Federal standard, 2013). Standard realization assumes application of a game in the educational process. Emphasis on the play activity as a leading type of activity was acknowledged in the Russian pre-school educational system starting with the papers of L.S. Vygotskiy. Those are the twenties and thirties of the XX centuries. However, practice of pre-school education from these positions still did not acquire conceptual foundation.

Culture-historical concept of L.S. Vygotskiy became a methodological basis for game grounding as a leading type of activity for pre-school children.

The game is acknowledged to be the leading type of child's activity: the game comprises a cultural code of child development. In such a way, the game is capable to activate the change in child's activity, leads a child to the external (or collective) plane, speed up interiorization processes, and activate intelligence and emotions. Different aspects of the game and preparation for its conduction are described in earlier published materials.

Necessity of the game in pre-school and school age was acknowledged by many Russian scientists-teachers of the XX century. However, in practice the unofficial norm was cruelty and child abuse. They existed in the form of various punishments in the family and in day-care centers. The adults could subject the child to physical punishments; lock up the child in the room etc. Only in 2013 a special status of childhood and emphasis on play activity were approved by the Federal State Educational Standard of Pre-School Education.

Russian standard has accepted a new concept - childhood concept, according to which a child should live (or experience) a childhood world during the pre-school period. Childhood world is a game. The child learns to perceive the surrounding world through the game. The teachers now should not accept a child as a little pupil or worker; they should learn to see a child in him/herself.

Therefore, the former paradigm of pre-school education was oriented on the personality of a child as on the conscious personality, the personality of a future worker. The new paradigm develops the philosophy of childhood where both culture-historical and activity concepts are actual. The way of realization of these concepts is a game. If in former types of the teachers and child's activity elements of socially useful work, labor nurturing, inclusion of children into the world of adults, dominated in new forms elements of game (cognitive, didactic, socio-dramatic etc.).

The problem of detection of qualities of Russian educators defining their personal readiness to work with children while playing is topical and little-studied. Traditional stereotype of an educator in Russia was connected with such qualities as strictness, exactingness and even unavailability (the educator had to some extent keep the distance from children). Cooperation officially acknowledged in the nineties frequently scared the educators because of pedagogical ethics, tact breach and was associated with overindulgence and lack of professionalism.

Acceptance of the new standard of pre-school education actualized such qualities of teachers as self-consciousness, empathy, cooperation etc. If in the nineties these qualities were considered to be a form of innovation, untraditional approach to education, now these qualities became a norm for all teachers. In other words, educators, in their activity, now should stimulate a child for self-fulfillment. The game becomes an important form of child's self-fulfillment. Herewith, the educators should as well fulfill themselves in this jointly organized play activity.

To estimate the quality of the pre-school education it is essential to answer the question: if the game can substitute the traditional education and what form is best - traditional (educational class) or new (game)?

Vanderheyden A. pays attention to the fact that traditional measurements of a child bear a selective nature and are quite painstaking. That is why over the last years, diagnostics based on educational program is popular. Herewith education can be both traditional (as a class) and new (as a game).

In Russia, after standard (2013) acceptance moratorium on estimation of pre-school education quality was declared, officially it ended on 1st January 2015 but in sober fact it still continues: distinct criteria and indicators of estimation are not worked out. But quality of pre-school education disturbs many people and it is still estimated by: teachers themselves, heads of day-care centers, inspectors, scientists. The most important estimation turns out to be the estimation of non scientists but parents, society.

The game makes the stay in the day-care centre joyful and happy. It is quite satisfactory for parents. But if after play activities the child then turns out not to be ready for school, the day-care centre stops exciting admiration of parents and acquires bad reputation not only in the eye of parents but in the eye of public conscience of all people.

In Russia school standards, programs are not as free, as in day-care centers. In 2014, a developing program of L.V. Zankov (Zankov, 1975) was excluded from the list of federal programs. This program (arguably, the only one of all) provided continuity between day-care centers and schools on the level of game using as the leading type of activity. That is why at this moment schools do not meet the day-care centers halfway, they state their own requirements to pre-school education and day-care centers have to take them into consideration and adapt.

Herewith, quality of pre-school education is strongly influenced by national-regional and religious peculiarities. For now, Russian pedagogic science does not see them, and society and mass-media started ringing the alarm. Situations when children give hostages to religious conflicts of adults (if teachers stick to social orientation of education, the parents can be the bearers of religious, sectarian etc. orientations) became more frequent.

National-regional peculiarities of education are usually connected with the problems of multicultural society. In Russia growth of religiosity and national self-identification is observed. It creates many problems in organization of pre-school education.

Over the last years strong growth of national identity and religiosity is observed. In Tatarstan only in 2014, 9 terroristic attacks were prevented resulting from national animosity and religious intolerance. Cultural codes in national identity of the Tatar people have changed. If earlier this code was connected with the names of two national poets - the Russian one - Pushkin and - the Tatar one - Tukai, now this code is all the more filled with historical-cultural sense and is connected with the ancient capital of Tatar-Bulgars of the ’II-’III centuries - the city of Bulgary (now it is the centre of pilgrimage of the Tatar people from the whole world), with the name of the poet Kul Sharif (died during seizure of Kazan by Ivan the Awesome in the middle of the XVI century, in remembrance of him the main - jameh - mosque was built in the centre of Kazan), with the name of the writer Gayaz Iskhaki (emigrated to Turkey, contacted with Hitler and during Second World War was attempting to create the independent republic "Idel-Ural" in the Mid-Volga and Ural region).

The culture code change through parents influences the educational process in the day-care centre. Our survey showed that people in the Volga region suppose that they all are skilled in the problems of education and education does not matter when we discuss the problems of national aggression prevention (Valerian Faritovich Gabdulchakov, Olga Vladimirovna Yashina, 2015).

Different understanding of games is referred to as national-religious peculiarities of the Volga region: Tatars-Muslims perceive some games as a sin before God. That is why, while planning the games it is necessary, to the extent of practicability, to avoid games with pictures and correctly conduct socio-dramatic plays in which there could possibly be roles incomprehensible for orthodox Muslims.

But in conduction of games of the didactic type we do not see any peculiar limitations. Those may be the games on experimenting with fairy tales, objects of the surrounding world (sand, grass, rocks, water, air etc.), wordplays (with emphasis on properties and characteristics of objects). Some theatre games (dramatization game, tabletop theater, puppet theater etc.) may be educative. In this case it is important to turn the cognitive step not into education, but into the "memory trap" of a child, into the joy of the unconscious revelation.

The age between 6 and 7 years in Russia is the pre-school age. In some countries of Western Europe children of 5 years of age begin studying at school. In Russia children of this age still go to day-care centers. Traditionally, Russian children go to school at the age of 6-7 year old. One should not equal children of this age to children of 4-5 years old. The research shows that children of the senior pre-school age (6-7 years old) should engage in didactic games more intensively. Health and fitness games prevailing in the Russian educational practice of the latest years weaken the cognitive readiness of 6-7 year old children for studying at school.

Key findings of the Department published in the following works: